An agent of influence and a national security bomber 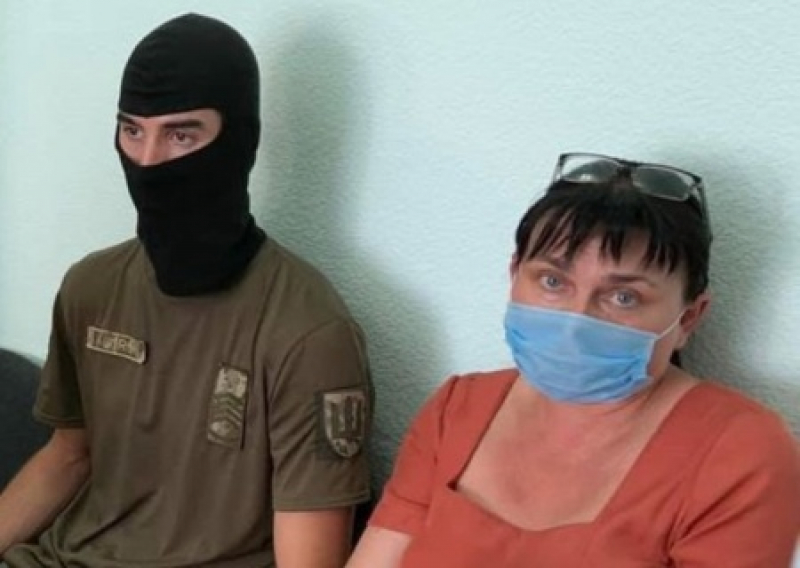 On August 20, the Kherson USS (Ukrainian Security Service)  detained Tatyana Kuzmich, 52, a Russian language teacher. The USS press service reported that the woman was recruited by the FSB (The Federal Security Services)  in 2015 during her trip to Crimea, after which she collected and transmitted to the Russian special services some data about military facilities in Ukraine and USS employees

During the search, as usual, computer equipment and, of course, Russian rubles were seized from her (100-ruble bills are visible in the photo) — which, most likely, should prove her cooperation with the Russian special services.

If Russian, then a spy

Just as usually happens with all «terrorists» and «separatists», Tatyana Kuzmich was detained under Art. 208 of the Code of Criminal Procedure (at the time of the crime), although there is no information that she directly transmitted any data at the time when the USS officers came to her with a search. This is a standard technique used in political cases to intimidate people, since being detained by a face-to-face group and being sent to a temporary detention facility (TDF) before trial is psychologically different from arriving at a court with a summons sent in advance and a lawyer hired in advance.

So, the teacher was handed a suspicion of committing a criminal offense under Part 1 of Article 111 of the Criminal Code of Ukraine (high treason). This is a particularly grave article (up to 15 years in prison), all actions under which, incl. search and detention by the investigator can be carried out only in the presence of a lawyer. This is never done, and investigating judges prefer to close their eyes to such violations. Moreover, free state lawyers, who, as a rule, are summoned to the USS headquarters after being detained to simply wave the protocol, do not write complaints about this. By the way, early in the morning of August 21, the speaker of the Kherson Regional Prosecutor’s Office wrote on her Facebook that a suspicion was handed over to a resident of Kherson, who “since 2017 has been transferring materials for carrying out subversive work in the region and Ukraine as a whole”. If she was recruited in 2015, and began to complete the task only in 2017, what did she do for 2 whole years? But let’s sort it out in order.

Tatyana Kuzmich is not just a teacher of the Russian language and literature with many years of teaching experience in various schools of Kherson. She is a candidate of pedagogical sciences, co-author of a textbook on the Russian language for grades 8 and 9 of general education schools in Ukraine with the Russian language of instruction (2008), head of the scientific and methodological laboratory for managing educational institutions of the Communal higher educational institution «Kherson Academy of Continuing Education» of the Kherson Regional Council and head of the public organization «Russian National Community» Rusich «.

For many years, Tatiana Kuzmich has held events for schoolchildren, students, teachers and public figures in Ukraine, Russia, and also on the territory of the Crimean Peninsula. The «Pushkin Beauty» competition, the unifying cultural project «Slavic Land», the celebration of Russian national holidays — these are just a few of what the teacher and scientist did. Even before the Maidan and the armed conflict in Donbass, she, as the leader of the Russian community of Kherson, collaborated with the Russian Consulate General in Odessa, the Rossotrudnichestvo office, the Russian Unity and Russian World foundations. That is, everything that all the leaders of national public organizations do — Jews, Armenians, Poles, Greeks, Germans and many others. Nobody, except Russians, is persecuted in Ukraine for receiving cultural and educational grants from state structures of the «mother» states.

Without the right to choose

On August 21, the day after the arrest, the investigating judge Oksana Chernysh chose Tatiana Kuzmich a preventive measure in the form of detention until October 9, 2020, and the teacher went to the pre-trial detention center to the criminals.

The Kherson prosecutor’s office reported that a bail of more than 500,000 hryvnias was set for the suspect. The average salary in Kherson is about UAH 10,000. We do not know what kind of property a teacher might have, that she was assigned such a huge amount of bail. However, there is judicial practice in such cases, when Odessa political prisoners Yevgeny Mefedov and Sergei Dolzhenkov paid 150,000 hryvnyas of bail each, and Kiev political prisoner Oleg Sagan — 80,000 hryvnyas. Perhaps a question for a lawyer.

According to the journalists who were present in the courtroom, Prosecutor Bondar requested that the meeting be held behind closed doors, citing the fact that the disclosure of a number of case materials could harm the investigation and USS officers. The behavior of the prosecutor is understandable: the attention of the media and international human rights defenders often does not allow the court to make illegal decisions in politically motivated cases, so it is beneficial for the prosecution that everything is behind closed doors.

For example, in the similarly closed case of the Kharkiv political prisoner Mekhti Logunov, even the representatives of the UN OHCHR and the OSCE mission were not allowed into the conference room. Thus, the public does not even know what exactly the 85-year-old man was sentenced to 12 years in prison. He was saved from certain death in prison only by the so-called. exchange of detainees with the LDPR ( Lugansk and Donetsk  People’s Republics). The prosecutor’s office obviously wanted to do the same in the case of Tatiana Kuzmich.

But why did the lawyer Irina Kovaleva support the prosecutor’s petition? On September 1, we contacted Irina Vasilievna by e-mail. She replied that at the moment she was not Tatiana Kuzmich’s defender, but represented her interests as a free state lawyer, only during her arrest.

However, the website «Judicial Power of Ukraine» shows us that on August 25, an appeal was filed against the measure of restraint in the case of Tatiana Kuzmich (consideration is scheduled for September 23), where Irina Kovaleva was also named her lawyer.

Since the case is being held behind closed doors at the joint petition of the prosecutor and the lawyer, it is impossible to get acquainted with the decisions on it on the specified website. But you can do something else. There is a so-called. an electronic system for the automatic assignment of judges, where the robot randomly selects judges for each case in order to avoid all kinds of corruption, including corruption.

But experience shows that the courts have found a way to deal with a soulless robot that can neither be bought nor terrorized. In the case of political prisoner Daria Mastikasheva, the auto-assignment of the Krasnogvardeisky District Court of Dnepropetrovsk chose three judges out of the three available. Magically, on the very day of the auto-assignment, all the other judges found themselves without specialization for considering criminal cases. The next day, everyone had such a specialization with a wave of a magic wand.

So, on August 25, the appellate court of the Kherson region in the same way selects three judges from the three available, namely Litvinenko, Batrak and Zaichenko. The rest of the judges, who usually consider criminal cases (Kalinin, Kalinichenko, Kolomoets and Korovaiko), unexpectedly lose their specialization. However, both August 15 and August 19 (6 days before the described case) judges Kalinina, Kalinichenko and Kolomoets have the necessary specialization, and they hold meetings (Korovaiko is on vacation). August 31 (after 5 days) they all, incl. Korovaiko, who returned from vacation, has a specialization again and they again hold court sessions.

In this situation, I bet that at the end of September the measure of restraint for Tatiana Kuzmich will be left unchanged.

FSB agents and agents of influence

What kind of facts did the prosecutor cite that the person was sent to a pre-trial detention center with a disproportionate bail? According to our information, Tatyana Kuzmich is suspected specifically of the fact that around 2012-2013 (the USS press service writes that in 2015) (before the Maidan and the beginning of the armed conflict), she was recruited by a certain FSB  officer Didenko during a trip to Crimea. After that, the woman allegedly already in 2017 began to transmit to him «information about the political, socio-economic, cultural and educational situation in the region, regarding the President of Ukraine, his external and internal political activities, the environment, the Servant of the People party, about the employees of the Kherson Regional State Administration, the mayor’s office, people’s deputies, law enforcement officers, military personnel and public figures, employees of the USS and the FISU ( Foreign Intelligence Service of Ukraine, who came to her attention, for the use of the FSB in subversive activities. «

How such data can get «into the field of view» of a teacher of Russian language and literature remains a mystery, and if the process is not made open after the end of the investigation, it will remain so.