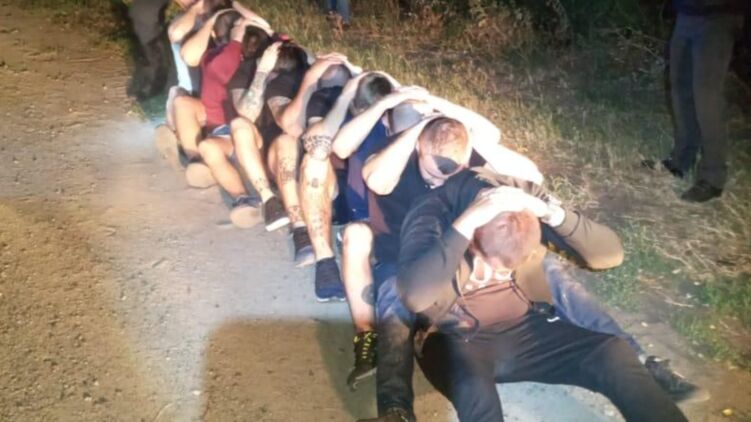 The main news for yesterday and today is the attack on the bus of the Patriots — For Life organization in the Kharkiv region.

Police said the bus was shot at from traumatic weapons by unknown assailants. However, it has not yet been officially announced who the attackers are and what the details of the incident are.

At the disposal of «Strana» was an internal police document, which describes all the details of the shooting near Kharkov.

To begin with, here is the official version of events.

At about seven in the evening near the town of Lyubotin, which is 30 kilometers from Kharkov, there was an attack on a Mercedes minibus. It was carrying activists of the organization «Patriots — For Life», which is headed by the People’s Deputy from the OPFL Ilya Kiva.

The police describe what happened like this. While the bus was moving, his road was blocked by a Mitsubishi car. Several people got out with traumatic weapons and opened fire on the bus. Then they left.

The police press release first says that the car was alone. However, below in the text it is said that several vehicles were installed on which the arrows moved. And this is more like the truth: since later in the Krasnogradskiy district 14 people were detained, involved in the attack on the bus. It is unlikely that they would fit in one car.

In the video, the men approach the bus, which is already at the side of the road with broken windows. Shots are heard, groups of several people beat people right on the road.

The fact that the police were silent about the beating is not the only question to the story. Yesterday’s reaction of the Ministry of Internal Affairs in the person of its head Avakov and his deputy Gerashchenko also demonstrates that the department is inclined to soften the picture. And to present the case as if there were showdowns of equally «bad» political opponents. And not an attack by armed bandits on activists of a public organization who did not break the law.

So, Arsen Avakov said that the attackers «with muscles and without brains» shot at «the same (that is, also» without brains «- Ed.), Traveling from a political tour.» True, what kind of right this gives them to shoot is not clear. But the minister thus outlined his attitude towards the victims of the attack.

His deputy, Anton Gerashchenko, also describes the story as «a conflict between two groups of supporters of different political forces.» That is, it was sort of a showdown.

However, there are great doubts that such an officially announced interpretation of events has at least some basis.

What really happened in Lyubotin

At the disposal of «Strana» was an internal police document that describes what was happening near Kharkov.

First, not one car, but two, blocked the movement. The first one is a black Mitsubishi Pajero SUV with Dnipropetrovsk numbers АЕ9309ОС. The second is a Volkswagen Transporter minibus with the numbers of the same region KE1312KE.

A photo of the latter was published yesterday by Deputy Interior Minister Anton Gerashchenko. As Strana has already said, this car is registered to the head of the Dnipropetrovsk National Corps Ivan Kurylenko.

The Interior Ministry’s certificate says that Kiva’s activists were attacked with weapons, rubber truncheons and bats. What was also hushed up in the police releases. They fired at the bus, then began to beat those who got out, after which they smashed the bus itself.

Also, an internal police document indicates that three of the wounded had gunshot wounds to their limbs (which Kiva said, but not in the official messages of the Ministry of Internal Affairs).

The entire leadership of the regional police arrived at the scene, including the chief, Valery Sokurenko. The attackers began to be detained an hour after the event.

The first batch was taken on the 87th kilometer of the Kharkiv-Pereshchepino road, at the Tatneft gas station. The police stopped a black Pajero with five gunmen. All are residents of the Dnieper. Here are their names: Datsenko, Kvitka, Garmanov, Kit and Mokrenko. Everyone is under 30.

The second batch of a silver Volkswagen Transporter was detained on the Kharkiv-Yalta highway. The names of the detainees (also from Dnieper): Burdov, Bondar, Bulakh, Golota, Zhidchenko, Kovalenko, Litvinov, Savotin, Duzhko.

A quickly check shows that they are related to the «National Corps». So, the detained Savotin, judging by Instagram, enters the Dnieper branch of the party.

And Oleg Bulakh in 2017 paid membership fees to the National Corps — 20 hryvnia.

Another contribution to the National Corps was made by the detained Anton Mokrenko.

The same document mentions Kirill Dotsenko. There is a photo of him with the Valhalla tattoo on Facebook.

From the «National Corps» Maxim Garmanov — he is a friend of the leader of the Dnipropetrovsk cell Ivan Kurylenko, in whose car the attack took place.

Now what they were armed with. At the site of the attack, experts found:

— also found on the pavement a Safari cartridge of 9 mm.

Also, a T-shirt with the National Corps logo was found near the bus. What she does there is not explained in the certificate.

Weapons were also found in the detained vehicles. Inside the Pajero there is a Fort rubber-rifle pistol, an empty clip, a folding knife.

In Volkswagen — a gas pistol and cartridges. All weapons are registered to Kirill Litvinov from the Dnepropetrovsk region who was in the car.

Then the police cites the testimony of the victims.

One of them — Denis Bashtovoy — says that a group of «patriots» was heading to Kharkov from Poltava, where they had a congress. Even before leaving Poltava, the activists noticed that they were being photographed by representatives of the National Corps — Kirill Magdalenko, Ivan Belgorodsky and Ivan Saltanov.

They led them, not really hiding, from Poltava itself. On the way, the bus «Patriots — For Life» overtook the same Volkswagen Transporter, and in the Kharkov region it was joined by a black «Pajero».

When they approached Lyubotin, their bus tried to overtake an Audi car with Lithuanian numbers, but it failed. After that Mazda and Pajero tried to cut them off. He also announced a Porsche Cayenne chasing a bus.

As a result, the road was blocked by Volkswagen and Pajero, after which the bus stopped. People ran out of them and immediately cut the tires of the bus. He tried to get under way, but it didn’t work out on the rim.

Then they started shooting at the bus and throwing stones and flares. Some of the passengers lay down on the floor, others panicked and jumped out, but they could not escape — they were attacked by the attackers.

“The guys did not manage to escape, because they were immediately attacked in the street and started beating several people at once,” says Bashtovoy. During the beatings, they shouted that this was just the beginning.

All this happened 5-7 minutes — until the command «Fall, back». At that moment, people began to gather on the road.

The interrogated minibus driver testified that conversations about the persecution began in the Poltava region. His information roughly coincides with the rest of the witnesses. He also, like Bashtovoy, claims that there were other cars, besides Volkswagen and Pajero — he calls the Toyota Camry, which also chased the bus.

A Strana source in the Patriots for Life organization says that the Interior Ministry representatives were notified of the threat of attack in advance. However, no reaction followed.

“Some top officials just didn’t answer. It is obvious that the National Corps is waging a systemic bandit war against us with the direct assistance of the authorities. This was understandable even from the way on Wednesday they tried to attack one of our leaders Oleg Shiryaev in Kiev. And no reaction to it. But such cases only make us more united. We will expand and intensify our work to attract new activists to our organization, «- said a source in Patriots For Life.

Conclusions from the document

The main conclusion is that the attackers are clearly from the National Corps (although the party officially denies its involvement). One car belongs at least to the head of the party in Dnipro, and among the attackers — at least five members of Biletsky’s party.

And the authorities, which in their press releases mention the organization «Patriots — For Life», are silent about the party affiliation of the attackers.

Second, the police are talking about gunshot wounds. Whereas the detainees had only rubber arrows. Either bullet wounds always characterize this way, or there was also a firearm — but they did not find it (or did not look for it).

Obviously, the attackers aimed at terror and intimidation. At the same time, the nationalists shot to kill — that is, they could quite kill someone. In this connection, a case was opened not only under the article “Hooliganism”, but also “Attempted murder”.

Also, the version about «showdowns» does not stand up to criticism. The victims show that their car was chased almost all the way from Poltava to Kharkov. In addition, the police did not record any injuries or injuries to those who attacked the group of Kiva people. This means that we are talking about an aggressive action by nationalists from the Dnieper.

The main question is how the investigation will proceed. Despite the fact that the authorities this time publicly worried about the attack (it was even condemned by the president, who had previously been silent on such occasions, as well as a number of «servants of the people»), it is likely that the nationalists will be released again. Also, there is no information yet about the detention of Ivan Kurylenko, in whose car the attackers arrived. This is the head of the «National Corps» in the Dnepropetrovsk region.

By how the investigation proceeds further, it will be clear how the authorities are not only in words (which they can utter for PR purposes on the eve of the elections), but also in deeds are ready to put an end to political violence in Ukraine.

If the detainees are soon released, and the case itself never reaches the court with specific prison terms, and if the organizers and leaders of this attack are not brought to justice (it is obvious that they are connected with the National Corps), then all statements by Zelensky and other officials will remain just an empty concussion of air. And those who attack political opponents, as well as those who lead them, will once again be convinced of their impunity.

Those who ensure this impunity for them at the highest level, and will bear the main responsibility for all subsequent attacks.