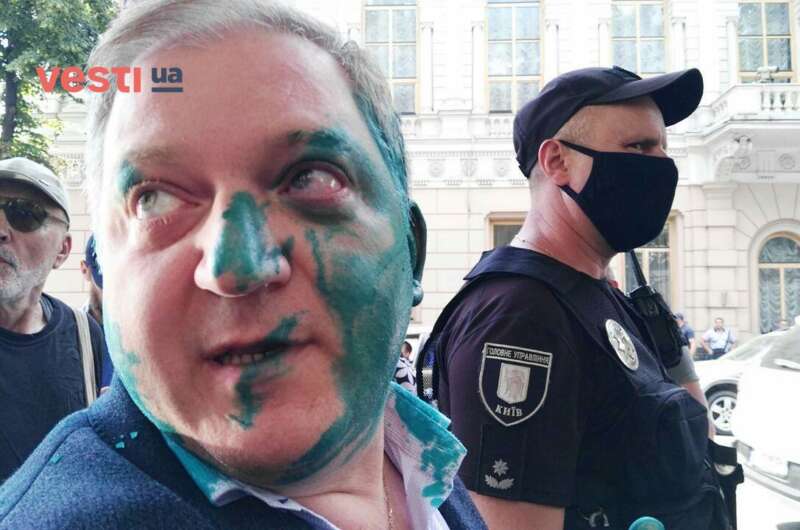 Oleg Voloshin, People’s Deputy from the Opposition Platform — For Life (OPFL), was doused with brilliant green at the entrance to the Verkhovna Rada on Tuesday, July 21.

The attacker on the deputy was detained by the police.

A companion of the nationalist who attacked the parliamentarian said that Voloshin was doused with brilliant green «for sovereign Ukraine.» The ATO veterans allegedly wanted to punish the deputy for «questioning the sovereignty of Ukraine.»

On his Facebook page, the deputy wrote that neither he nor any of his colleagues could be intimidated with such incidents.

“So far, briefly. These freaks will not intimidate either me or any of my colleagues. We fight further. They also hope to initiate a case against me because I, in self-defense, put one figure in the eye, ”Voloshin noted.

Later, the press service of the metropolitan police said that two people were detained.

“To give explanations and clarify all the circumstances and reasons for what was done, the detainees were taken to the Pechersk police department. Information on this fact is registered in the Journal of Unified Registration of Applications and Messages in accordance with the requirements of the current legislation, ”the law enforcement officials said.

We will remind, on June 17, Voloshin from the rostrum of the Verkhovna Rada said that Ukraine is under external control, and the past government «profiled Crimea.»