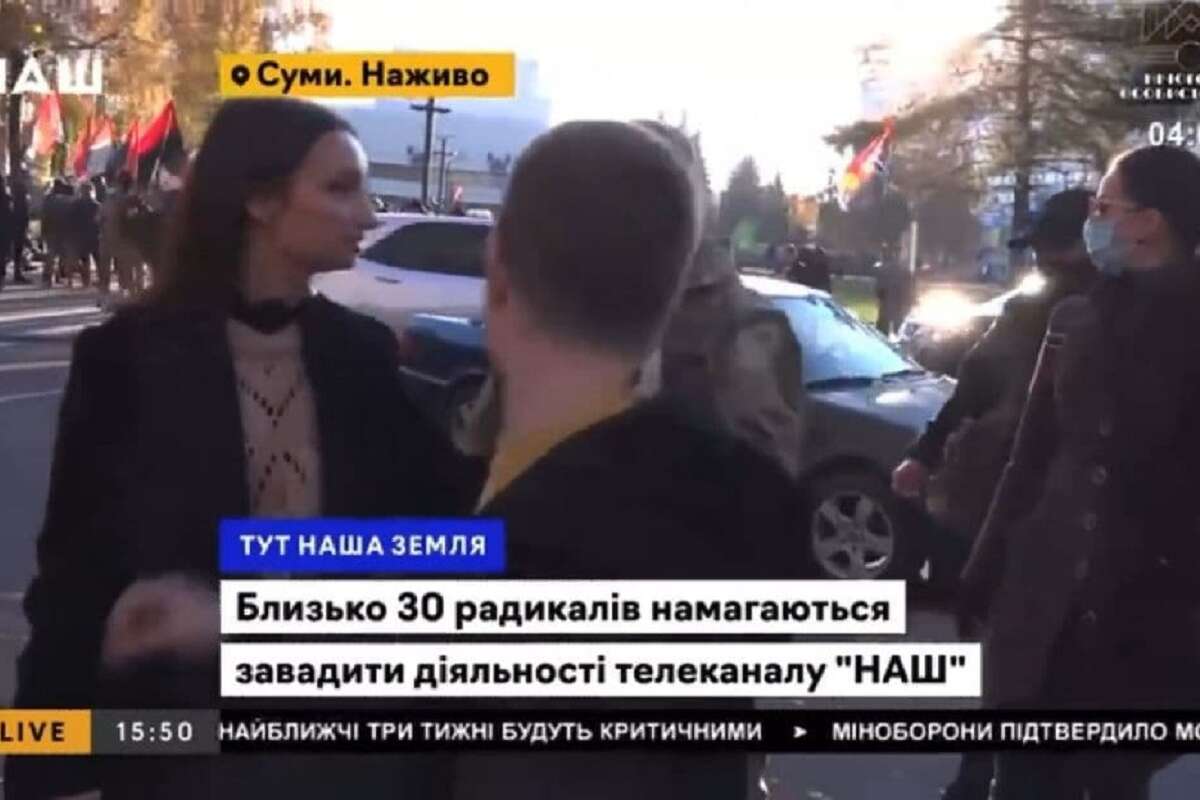 On Saturday, October 30, during the filming of the special project «Here is our Land» in Sumy,journalists of the NASH TV channel were attacked by several dozen radicals. Activists used physical force against journalists and cameramen, demanding to end the live broadcast.

Strana talked to the injured NASH team and learned the details of the incident in Sumy.

According to the journalist Alexey Palchunov, on that day in Sumy, on the set of the special project «Our Land», the team worked in different locations — in the city and region.

His colleague Maxim Gerasimenko clarified that at the beginning of filming in the morning they were not prevented from working. However, on the same day, the deceased member of the «Right Sector» Alexander Ivanin was buried in Sumy.

«The funeral was attended by members of the Right Sector. According to local residents and the police, after the wake, they stopped by our house. They started coming with flags and shouting » Glory to Ukraine! Glory to the Heroes!» These «magic spells» affected the police, who are responsible for power stories,» explains Gerasimenko.

However, as the journalist specified, there were few local security forces at that time, and the police only demanded that media representatives not provoke a conflict.

«Unfortunately, the police that could protect us were not enough. There were also guys in civilian clothes who tried to talk to the activists. But there weren’t many of them — the entire square near the stage was occupied by guys from the Right Sector, there were a hundred of them for sure, «Gerasimenko tells Strana.

As a result, during the filming, the team of the NASH TV channel was attacked by radicals several times.

«Around 15: 30-16: 00, about a hundred people in camouflage uniforms with red and black flags appeared on the stage in the city center. My colleagues Maxim Gerasimenko and Anna Osipenko were there. Radicals came literally from all sides, began to pinch, break equipment and the screen. There is a suspicion that these people came from Ivanina’s funeral, » Alexey Palchunov, a journalist of the NASH channel, told to Strana.

At the same time, according to his colleague Gerasimenko, the activists imposed a condition on the film crew — they were given five minutes to finish the broadcast. However, the team of the NASH channel could carry out the broadcast with the permission of the city authorities until 18: 00.

The cameraman suffered the most in the clash with the radicals: they tried to take the camera away from him and beat him with their feet, knocking him to the ground.

«About a hundred people surrounded our film crew. Complaints, aggression and pressure began. For some reason, most of them were thrown at the cameraman-he continued to shoot them all the time, backing away. At some point, the radicals knocked him to the ground, kicked him and broke his equipment, » says Alexey Palchunov to Strana.

Journalists of the NASH channel told Strana that the radicals tried to snatch microphones from them, pushed the team to the city fountain and demanded to stop filming. As a result, journalist Gerasimenko was hit in the face.

«First they attacked the operator, I ran to him. All this time, the dialogue police have been telling us to stop filming and not provoke radicals. I ignored these sweetest requests, for which I was hit in the face, » says Gerasimenko.

After that, the radicals attacked the journalist Palchunov and his operator.

«I was at another location at that time, I arrived at the scene literally in 10-15 minutes. I went with the cameraman closer to the unmarked stage. But the activists started asking questions about where we were coming from. They demanded to provide an ID card, but I refused. Then about 30 people started coming at me, trying to push and hit me, and coffee was poured on the operator’s neck and the cable was cut, » says Palchunov.

According to the journalist, at that time, the police strictly forbade the journalist to film what was happening and again urged not to provoke radicals.

«As a result, the police took us in a ring and took us to a safe place,» added Palchunov.

15 minutes after the brawl, the Right Sector activists left the area in an organized manner, where they attacked the journalists of the NASH channel. Mostly they were radicals who came from other regions, not local ones, says Palchunov.

As a result of a clash with radicals, Maxim Gerasimenko had a split lip, and the cameraman received bruises.

The journalists filed a police report. The moment of the attack was captured on video, so there is enough evidence of the radicals ‘ guilt, according to employees of the NASH channel.

«At the moment, there are no detainees. We took pictures of the beatings, everything is recorded. Then there is the work of lawyers and the police, » Maxim Gerasimenko summed up.