«Enemies of Ukraine» — numbers in the ear. What is known about the OCU bishop who beat up a woman in Kiev 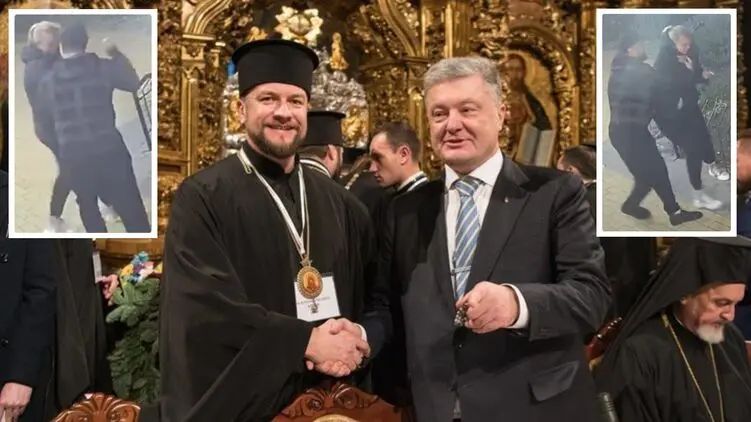 In Kiev, a scandal with a high-ranking hierarch of the OCU Bishop of Shepetiv Adrian attacked his neighbor and punched her several times. Then he knocked her mobile phone out of her hand and kicked it into the grass.

It happened at the entrance door, so the incident was caught on video. The bishop fought first with the woman, then grappled and knocked to the ground her husband, who was trying to understand the incident.

The conflict happened because of the dog, but then the priest made a claim that his neighbors speak Russian, suspecting them of «separatism».

Neither the police nor the OCU itself has yet responded to the egregious incident. And the bishop Adrian himself is a fairly well-known figure in the OCU.

«Strana» understood the scandal and the person who arranged it.

Beaten up for the dog and the Russian language

The wild story with the OCU hierarch was reported by ICTV on October 30. According to journalists, the bishop Adrian (secular name — Roman Kulik) beat up his neighbor in Kiev Ivanna Berezhnaya.

The conflict occurred because of her dog- a Russian toy Terrier. The neighbors complained about his barking and one night came to the door to Ivanna with threats to «calm down» the dog.

The next day, the woman met at the entrance of a neighbor who came to her at night because of the dog, and demanded not to do so again. Then the man ran out and attacked Ivanna with her fists.

«BishopAdrian started beating me up, » says the Kiev resident. He repeatedly kicked her roughly, and then knocked out the phone that the woman was trying to use to film the attack.

He also did not like the Russian language spoken by the woman and her husband. «He said that we are separatists because we speak Russian,» said Ivanna.

The beating was recorded by video cameras. They show a bishop dressed in civilian clothes actually punching a woman and pushing her.

Then Adriana had a conflict with Ivanna husband, who was trying to get a video from the security cameras at the entrance. There are videos and fights with him. Other neighbors interviewed by journalists confirmed that the priest constantly clings to the residents of the house and scandals with them.

Adrian himself published later on Facebook his version of what was happened. He said that he was protecting his assistant from an allegedly aggressive neighbor, and the incident was a » planned provocation.» Why he defended her with punches to the stomach of a woman who did not touch anyone with a finger- he did not explain. Kulik also denied that a criminal case was opened against him.

He posted a video of the conflict of Ivanna and his assistants the day before. It shows that women are scandalized, but they do not go beyond the law and do not fight. The incident occurred on October 16 around seven in the evening. That is, the hierarch, apparently, jumped out into the street and began to beat the neighbor after that.

By the way, in the ICTV story, the priest is called «the neighbor’s husband». And, judging by the fact that Kulik was on the spot immediately after the conflict between  two women — so it is. But there is a question here. Many years ago Adrian was tonsured a monk — and, as we will show below, as many as two times.

And monks, of course, can neither marry nor cohabit with anyone. But, apparently, not in the OCU, which, by the way, did not comment on the egregious behavior of its bishop.

Adrian is a high-ranking hierarch of the OCU, created by Poroshenko’s efforts in 2019. There is a photo of him posing next to the ex-president and a copy  of  Tomos on autocephaly, brought to Ukraine. But not only Poroshenko has photos with Adrian. They are not so long ago boasted and the deputy from the group «For the future» SergeyRudyk.

Roman Kulik-the futureAdrian is originally from the Khmelnytsky region. Before the collapse of the Soviet Union, he studied at the Moscow Theological Seminary, where, apparently, he hardly attacked anyone for the Russian language.

But with the advent of independence, Roman went to Lviv to finish his studies, where the church university of the UAOC, unrecognized in Orthodoxy, was opened. This» spiritual academy » then passed under the Kiev Patriarchate, and from it to the OCU.

In the rank of deacon of autocephaly Roman did not serve long: in 1993, he went to the United States, where he was received by the Canonical Orthodox Church in America.

He served there for a long time — until 2001. After that, he joined the schismatics again — the Ukrainian Autocephalous Church of the American Diaspora, where he was tonsured a monk under the name Bohdan. But three years later he returned to the UAOC: he was taken under the personal patronage of the head of the church Mefody.

Then he changed several bishoprics: in Zhytomyr, Odessa, Khmelnitsky. But he had problems with other autocephalous hierarchs: they did not recognize his «tonsure» in America. Therefore, in 2011, he «repeated the ritual» and with the blessing of  Mefody changed his monastic name from Bogdan toAdriana.

The history of two conversions to monasticism is extremely ambiguous for any Orthodox church. But this was not the case in Ukrainian non-canonical structures either. Moreover, the newly-born Adrian then changed two more church organizations after that (that is, there will be five of them in total).

In 2013, he moved to the Filaret Kiev Patriarchate, having previously criticized his previous patron Methodius. Thanks to him, by the way, he received previous church positions and among them-the highest at that time in his career as bishop of Khmelnitsky and Kamianets-Podilsky.

He reproached Methodius in the unwillingness to unite with Filaret. And so he united with the latter on a personal basis, becoming the rector of one of the parishes of the UOC-KP in Khmelnitsky.

In this status, he participated in the Unification Council of 2018. And he entered his fifth church-the OCU-in the status of Bishop of Shepetovka. After that, he began to criticize the former leadership again — this time Filaret, who, after receiving the Tomos passed back and decided to restore his «patriarchy».

Adrian branded his former boss a «separatist» as well as a «professional schismatic and rebel.» Although such fame was found for Mikhail Denisenko and in those years when Adrian was on his side —and this is almost a five-year term.

But it wasn’t only Filaret who got it. Commenting on Minister Reznikov’s idea of renaming the UOC (Reznikov suggested calling it a «subsidiary organization of the Russian Orthodox Church»), Adrian wanted to go much further.

«It is advisable for everyone who lives in Ukraine and does not like it, to attach a plastic number plate to the ear, as is done with rootless dogs. So that Ukrainians can see who is in front of them, » Kulik suggested in February 2021.

After the scandal, Adrian closed his Facebook page for public access, and now there is only one visible post-with a reaction to the beating.

But there are still other traces of Adriana activity on the Web. He is, for example, a staunch supporter of moving the celebration of Christmas from January 7 to December 25.

He also regularly criticized Zelensky, who, in his opinion, «was chosen for the highest post in Ukraine by the infantile population of our state» and «corrupts the population of Ukraine by promoting perverted forms of human sexual behavior.»

This is what he said about the Independence Day concert in 2020. «Zelensky’s show is many times more disgusting and unholy than LGBT parades,» he wrote on Facebook.

In September 2020Adrian commented in a peculiar way on why the transition of churches from the canonical UOC to the newly created OCU has decreased. The answer was simple: the enemies were to blame, not the new church itself.

The theme of fighting the «internal enemy» is generally one of the central ones. So, he urged to be wary of Ukrainians «with a Russian soul.»

«If the body and soul are Ukrainian, then this is a normal, integral person. If the soul of someone else is Russian or of another nation, and the body is Ukrainian, this is a direct path to schizophrenia, » said Adrian is on one of the airwaves.

Judging by the fight on October 16, the bishop is behind his «Ukrainian body». Adrian follows very seriously — he, for example, goes to the gym and even once posed there in a T-shirt, offering a «weight loss challenge» for Lent.

Note that a real monk would never post his photos half-naked. And to claim that fasting is a reason to lose weight.