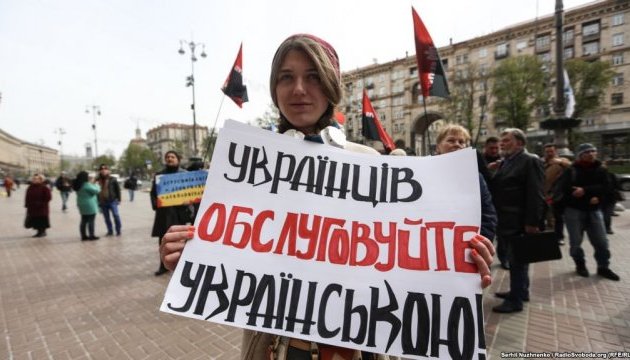 Ukrainian writer Larisa Nitsoy, better known not for her work, but for hurray-patriotic scandals, staged another showdown regarding the Russian language. This time she began to humiliate the woman-cashier in the «Varus» supermarket, which is located at the entrance to Kiev.

Nitsoy called the seller «stubborn» and «stupid», and also recalled the law on the functioning of the state language. The document describes that the service sector in Ukraine should work in Ukrainian.

True, even under this law, total Ukrainization is introduced in several stages.

Another of them is already on November 16, 2020 and concerns exactly the language of service in shops and cafes. Thus, in two months, Nitsoy and other «fighters» against the Russian language will receive full carte blanche from the state to persecute service personnel.

«Strana» talks about the new scandal with Nitsa as a harbinger of the coming increase in Ukrainization.

Nitsoy: «They hire the stubborn and stupid»

Larisa Nitsoy continues to “catch” Russian-speaking citizens and publicly scold them. If earlier she pounced on a Russian-speaking taxi driver, called him a «rapist» and «anti-Ukrainian nit», now her new victim is a cashier in a supermarket.

Nitsoy told on Facebook a story about the conflict when she visited the Varus store near Kiev.

According to the writer, the cashier greeted her as a buyer in Ukrainian, and on clarifying questions switched to Russian. Nitsoy made a remark to the seller. The woman did not remain silent — she replied that she had the constitutional right to speak her native language. To complain, Nitsoy invited an administrator. But she also did not speak Ukrainian.

Nitsoy explains: she is against serving in supermarkets in Russian, since those who shot at her friends during the war spoke Russian. In this regard, Russian-speaking cashiers are associated with the enemy. This is what she told the Varus seller, and also threatened to call the police.

The saleswoman told her that she was from Vladivostok. Whether this is true or not is unknown, as is the whole story of the writer. But, apparently, Nitsoy’s subscribers should conclude from this that in Ukraine only natives of Russian cities speak Russian.

“They continue to hire stubborn and stupid people. All of them together are indifferent to our feelings, traumas, pains, our historical truth and that someone is dying there … They do not care that because of these stupid conversations and quarrels we are not building Ukraine. We cannot harness one harness to go together towards the goal. To the prosperity of our country. They don’t care about that. They are blind to our suffering. They are deaf to our requests. Our love, our hugs, our curtsies do not help. It only hurts. They perceive our manifestations of tolerance as our weakness, ”the writer writes.

In her post, Larisa Nitsoy deliberately distorts the Russian language — writes Russian words in Ukrainian letters, as nationalists often like to do. Her full post is shown below.

So far, Nitsa’s next trick is unlikely to threaten the saleswoman and the store with anything. At the moment, Russian-speaking service and trade workers do not violate the law.

But the situation will change from November 16.

It is from this date that the business that serves consumers should switch to the Ukrainian language. Namely, cashiers in supermarkets, waiters in restaurants, employees of sports clubs, hairdressers, spa-salons and so on.

If the client wishes, they can also switch to another language — acceptable to both parties, as specified in the law. But they are obliged to address people only in Ukrainian, and then according to the situation.

From November 16, the new rules apply to online stores, online catalogs and sites that sell something. True, information on the Internet can be duplicated in other languages.

In two months all labels of all goods must be Ukrainianized. The volume of text in another language should not exceed the volume of Ukrainian.

Read more about the changes in a separate article about all the upcoming stages of Ukrainization with dates and measures.

Given that many service workers are Russian-speaking (especially in the southeast of the country), these norms will give all kinds of activists like Nitsa reasons for provocations.

After all, the fines for violation of language norms in the service sector are considerable — from 20 to 70 tax-free minimums. In the language of specific figures, this is UAH 9 800-11 700. That is, the whole monthly salary of an ordinary employee of a supermarket or cafe. And sometimes even higher.

In fact, this is a fine for using the language spoken by at least half of the citizens of Ukraine — even after the disappearance of Crimea and Donbass.

But this does not change the essence of the matter.

That is, after the entry into force of the relevant provisions of the law, the visits of mobile activists to shops and restaurants will have a specific financial component. Therefore, we should expect whole «raids» — with the aim of including blackmail and personal enrichment. And consequently — and new scandals.

Considering that the co-author of the scandalous law Taras Kremin became the commissioner for Ukrainization, support for this movement at the top will be provided.

Another question is how the courts, local authorities and society in general will react to the language dictates and fines. If it is sharply negative, there is reason to expect that in the Russian-speaking regions, the activity of «mobile inspectors» will be greatly limited. And the norms of the law themselves will be sabotaged in practice.

But in general, the solution to the problem would be the abolition of the scandalous law on total Ukrainization.

The corresponding claim is pending at the Constitutional Court. The lawsuit was filed by deputies from the «Opposition Bloc» and «Opposition Platform — For Life» in the previous parliament, a month after the law was signed by President Poroshenko.

The deputies note that the law does not comply with a number of provisions of the Constitution, is aimed at discriminating against Russian and other languages ​​of national minorities of Ukraine, as well as citizens on linguistic grounds. In particular, we are talking about Article 10 of the Constitution, which guarantees the protection and free development of the Russian language — to which the cashier in the Varus supermarket referred.

During the first hearings in the summer, the President’s Office spoke out against repealing the law. And in general, Zelensky continues the course towards Ukrainization. Therefore, the likelihood of the abolition of draconian language norms at the moment is small. Unless serious political circumstances require it.

One way or another, but since November 16, the law on Ukrainization in the form of the obligatory use of the state language in the service sector will for the first time «invade» the living space of all residents of Ukraine. And this can already become a topic in local elections in the southeastern regions. Moreover, it is extremely unpleasant for the party in power.

In any case, the more public discontent with the draconian norms of the law, the higher the likelihood that the government will go to change or repeal it.