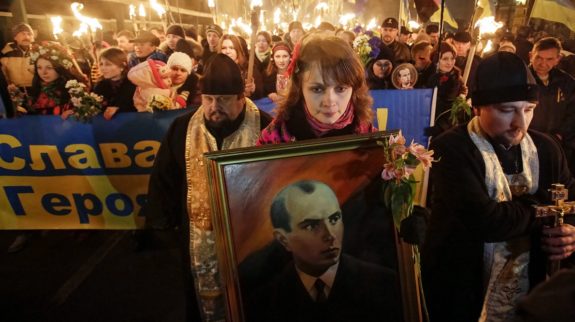 Given which parties such an offer came from, it will most likely be accepted.

Who are these people

Vladimir Shchigelsky has been a member of the Carpathian Sich since 1938, with Ukrainian nationalists as its combat nucleus. At the beginning of World War II, after the occupation of Zakarpattia by Hungary, he moved to Germany and joined the military units of the nationalists, cooperated with the Ukrainian auxiliary police of the Third Reich.

Since the summer of 1944, he has been a member of the Ukrainian Insurgent Army under the pseudonym Burlaka. Hundreds of Shchigelsky were later accused of the mass murder of Polish citizens on August 6, 1944 in Baligrud and the subsequent looting of the homes of those killed. The insurgents left the settlement after rumors of the approach of a detachment of Soviet guerrillas, in December 1944 they moved to Poland. They repeatedly clashed with the Polish police until they moved to Czechoslovakia in June 1947.

On the night of September 4, Shchigelsky was captured and sent to the barracks. In 1948 he was charged with more than 50 counts, and after an attempt to escape he was handed over to Poland, where in April 1949 he was executed by a court decision.

Roman Klyachkivsky is one of the founders of the UPA, who headed it from 1943 to 1944. In 1937, as an OUN activist, he spent some time in prison. Later he became the head of the «Yunatstva (Youth)» OUN in the Stanislav region. In September 1940, he was arrested after the NKVD disclosed the organization of an uprising in Western Ukraine, escaped from prison and led the Lviv unit of the OUN., Led the combat groups of the OUN members in the region.

In 1943, he opposed the decision to go to war with the German invaders, since he considered the Poles to be the main enemies. In 1943 he became one of the initiators of the mass desertion of Ukrainian policemen and their transfer to the UPA. In February 1945, the NKVD was killed while combing through the forest with a shot in the back.

According to Polish historians, Klyachkivskyi bears direct responsibility for the Volyn massacre — the mass extermination of the Polish population in 1943-1944, when from 50 to 60 thousand Poles died.

In addition, he gave orders to destroy Soviet prisoners of war who had escaped from German captivity, and carried out “purges” (murders) in the ranks of the UPA to eradicate “unreliable elements” and possible enemy agents.

That is, both heroes proposed to be honored are accused of mass murders of peaceful Polish citizens and in the fight against the Soviet troops opposing the Nazis.

On November 18, the UN General Assembly adopted a resolution «On combating the glorification of Nazism, neo-Nazism and other types of practices that contribute to the escalation of modern forms of racism, racial discrimination, xenophobia and related intolerance.»

The document was supported by 122 countries, 53 abstained from the decision, and once again only Ukraine and the United States voted against.

It is most likely that the countries voted against precisely because Russia was its initiator. Which, through the support of the document, can condemn the celebration in Ukraine of the same heroized Stepan Bandera and the SS «Galicia» division. Any initiatives by Russia are unlikely to be supported by the United States and Ukraine for political reasons.

According to the US representative Jason Mack, this resolution is «a thinly veiled attempt to legitimize Russian disinformation» and «denigration of neighboring states under the cynical cover of fighting the glorification of Nazism.»

Let’s note that the United States and Ukraine prefer to condemn Nazism in conjunction with Stalinism — for example, for the partition of Poland together with Germany in 1939. However, Russia does not consider the issue in this vein, since it can be used to strike at its historical past by condemning the USSR on an equal footing with Hitlerite Germany. With the help of which individual countries would like to diminish and even level the role of the Union in the victory over Nazism.

Annually in Kiev on January 1, the celebration of the anniversary of Stepan Bandera’s birthday with a torchlight procession, traditional for Nazi Germany, takes place.

The Day of the Defender of Ukraine, Petro Poroshenko, by his decree in 2014, timed to coincide with the Day of the Intercession — a great holiday for the Zaporozhye Cossacks, which became the day of the founding of the UPA. At the present time, he is associated primarily with nationalists, and not with the Cossacks.

Greetings and slogan of Ukrainian nationalists “Glory to Ukraine! Glory to the heroes!» at the suggestion of Poroshenko in 2018 made the official military greeting of the Armed Forces of Ukraine.

And the funeral of members of the SS «Galicia» is periodically accompanied by people in Nazi uniform.

This, taken together, indicates an extremely loyal attitude of the Ukrainian authorities to the glorification of the Ukrainian nationalists who collaborated with the Nazis. In contrast to the eradication of the memory of the leaders of the Soviet era: within the framework of decommunization in Ukraine, even the street of the world’s first woman-cosmonaut Valentina Tereshkova was renamed.

The problem is that the nationalist part of Ukrainian society does not condemn the cooperation of Ukrainian nationalists with the Nazis, considering it a natural part of the struggle for the independence of the region. For them, the rejection of the Nazi attributes used at that time is a rejection of their regional historical memory, which leads to the partial glorification of Nazi symbols in Ukraine. And that cannot be accepted by those whose ancestors fought against Nazism, condemned by the world community.

That is why, for example, the Azov regiment uses a stylized wolf hook as its own symbol.

And the nationalist-minded politicians who came to power are trying with all their might to decommunize Ukraine — that part of it that fought against Nazism, while leaving monuments to the nationalists who collaborated with the Nazis.

This happens at the level of the top officials of the state, which, moreover, allocates money for the popularization of nationalism already from school.

A particularly cynical message from the Ukrainian authorities was sent to the Jewish people through Babi Yar, in which the Nazis exterminated Jews.

Near the memorial dedicated to the Holocaust, there are streets named after members of the OUN Elena Teliga and Oleg Olzhich. Teligi goes to the avenue named after Stepan Bandera (formerly Moskovsky), which in a straight line after crossing the bridge over the Dnieper turns into avenue named after Roman Shukhevych (former Nikolai Vatutin).

Recall that Shukhevych during the Second World War was the commander of the               OUN (b) in the Nachtigall battalion. He is associated with the Jewish pogrom in Lvov in July 1941, when about 4 thousand Jews were killed. At the same time, the battalion members themselves claim that they have nothing to do with the pogroms.

Will relations with Poland worsen?

Israel and Poland regularly condemn the honoring in Ukraine of the leaders of the Organization of Ukrainian Nationalists and the Ukrainian Insurgent Army.

Thus, Polish Ambassador to Ukraine Bartosz Tsikhotsky and the head of the Israeli diplomatic mission in Kiev Joel Lyon, in a joint statement on January 2, 2020, called an insult to the appearance on January 1 on the building of the Kiev city administration of a banner with a portrait of Bandera.

“Remembering our innocent brothers and sisters who were killed in 1939-1945 in the occupied territories of Poland, which today are part of Ukraine, we, the ambassadors of Poland and Israel, believe that honoring people who actively promoted ethnic cleansing is an insult, and leads to the opposite desired result in the fight against anti-Semitism and in the process of reconciliation of our peoples, ”the statement said.

They also expressed concern about the allocation of funds by the Lviv Regional Council to honor the memory of OUN member Andriy Melnik and anti-Semitic and anti-Polish writer Ivan Lipa.

If the Verkhovna Rada supports the resolution on honoring Shchigelsky and Klyachivsky, new concerns may be voiced. Which, however, will not lead to any significant deterioration in relations between the countries — probably due to the fact that maintaining good relations for them with Ukraine is more beneficial than seeking historical justice.