Violation of the rights and legitimate interests of national communities in Ukraine (March 19-25, 2022) 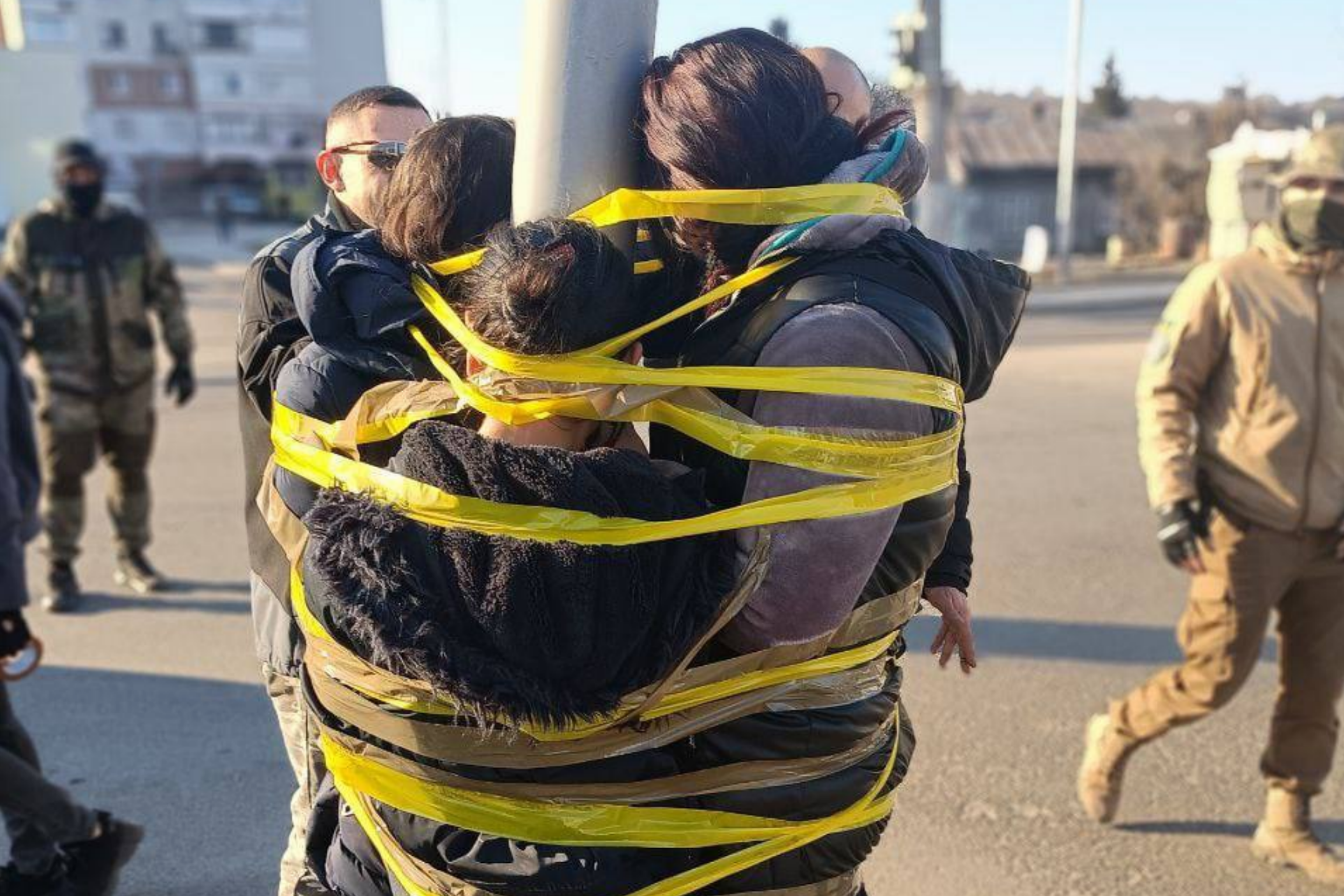 The situation in the sphere of observance of the rights and legitimate interests of various national communities living in Ukraine remains unsatisfactory. Monitoring of the information space in the period from March 19 to March 25, 2022 allows the following main facts and problems in this area.

President of Ukraine Volodymyr Zelensky and the National Security and Defense Council (NSDC) continue the practice of imposing illegal sanctions against political opponents. Thus, in violation of the procedures provided for by the current legislation and without a corresponding court decision, the activities of 11 parties expressing the interests of a significant number of predominantly Russian-speaking residents of Ukraine were suspended. The Verkhovna Rada of Ukraine also received a bill contradicting the Constitution on the prohibition of «pro-Russian parties» in the country.

Google has restricted the use of its services for residents of the Donetsk and Luhansk People’s Republics. In particular, users from the DPR and LPR no longer have the opportunity to purchase premium accounts on the YouTube platform. Residents of Donbass will be able to use Google Pay only after they confirm to the company that they do not live on its territory. The relevant practice erodes one of the basic principles in the field of human rights, according to which discrimination based on place of residence is not allowed.

Calls for illegal and cruel treatment of Russian prisoners of war continue to be heard in the Ukrainian media environment. Ukrainian border guards on the border with Moldova have spoiled the passports of Russian citizens — mother and child.

The detentions of journalists who are trying to objectively and comprehensively cover current events in Ukraine continue. So, in Odessa, the editor-in-chief of the Timer website, Yuri Tkachev, who for many years consistently and argumentatively advocated a peaceful resolution of the conflict in Donbass, was detained.

The Head of Kupyansk, Kharkiv region, Gennady Matsegora, who agreed to cooperate with the Russian Armed Forces, announced the capture of his daughter by SBU officers in Ivano-Frankivsk. The girl has nothing to do with the events taking place in the Kharkiv region and cannot be responsible for the actions of her father.

1. Prohibition of the activities of political parties that are in opposition to the current government and express the opinion of the Russian-speaking population of Ukraine.

On March 20, the NSDC and President of Ukraine Volodymyr Zelensky banned the activities of 11 political parties for the period of martial law, allegedly for «ties with the Russian Federation.» The list also includes one parliamentary party, the Opposition Platform for Life.

The following parties were banned in Ukraine:

At the same time, a group of deputies submitted to the Verkhovna Rada a bill banning political parties for «pro-Russian politics»(https://strana.today/news/382709-v-radu-17-marta-vnesli-zakonoproekt-o-zaprete-politpartij-za-prorossijskuju-politiku.html).

Elizabeth Trossell, the official representative of the Office of the United Nations High Commissioner for Human Rights, responded to the suspension of the activities of a number of political forces in Ukraine.

«The Government of Ukraine must ensure that such suspension of obligations is necessary and proportionate to the severity of the situation, as well as non-discriminatory,» the UN representative said/ (https://russian.rt.com/world/news/981333-uvkpch-oon-zapret-partii?utm_source=yxnews&utm_medium=desktop).

2. Discrimination of citizens of Ukraine in connection with their place of residence or formal registration.

YouTube video hosting has blocked premium accounts for residents of Donetsk and Luhansk People’s Republics, as previously for Crimea. The relevant explanations are provided by the platform’s support service in response to complaints from users who have stopped using this option. In addition, people with registration in the territories of the republics report that they are massively blocked in the Google Pay service. The accounts of only those citizens who have provided the company with registration documents on the territory controlled by Ukraine (including certificates of a migrant) are subject to unblocking) (https://strana.today/news/383323-premium-akkaunty-youtube-stali-nedostupny-dlja-zhitelej-ldnr.html).

Thus, Google, which owns the Google Pay payment service and the YouTube platform, seeks to «punish» the population of regions that have long-standing political differences with the Kiev authorities. The company’s actions are a manipulative attempt to persuade residents of the republics of Donbass to a negative perception of the actual government in this territory and discriminate against citizens based on their place of residence.

3. Violation of the rights of prisoners of war, as well as Russian citizens who are not combatants

The volunteer of the «First Volunteer Mobile Hospital» Gennady Druzenko said that the doctors working for him will castrate the captured Russians.

«I instructed my doctors to castrate all [captured] men, because they are cockroaches, not people,» Gennady Druzenko said on the Ukraine 24 TV channel .

Such statements undermine the authority of Ukraine,» reads the message signed by a number of well-known Ukrainian doctors.

Later, Gennady Druzenko wrote that it was emotions and apologized. Adviser to the head of the Office of the President of Ukraine Oleksiy Arestovich urged not to dehumanize the enemy and refrain from calls to mock prisoners or take revenge on the children of the military(https://strana.today/news/382713-arestovich-poprosil-ne-izdevatsja-nad-plennymi-rossii-.html).

«No matter what atrocities the enemy commits, no matter what the strong desire for communication, we should not break beyond the Geneva Convention, which allows destroying the enemy on the battlefield, but does not allow mocking prisoners of war and even more so making some calls for revenge… To do so is to act against the laws of military human honor… Prisoners are inviolable. Prisoners should be protected as well as their soldiers, or even more. The same applies to any calls to take revenge on children or peaceful citizens of the Russian Federation. This is absolutely unacceptable,» he said.

«The first mobile hospital does not castrate anyone and is not going to. These were emotions. I apologize,» Gennady Druzenko said on his Facebook page.

Ukraine plans to adopt a law on the treatment of Russian prisoners. Bill No. 7173 is published on the website of the Verkhovna Rada of Ukraine.

The detention of prisoners of war in correctional colonies and pre-trial detention facilities will take place in compliance with the norms of international humanitarian law and the requirements of national legislation.

Prisoners of war will be allowed to correspond by mail in envelopes.

State Duma deputy Artem Turov published a photo of the passport of a one-year-old boy from Russia, in which Ukrainian border guards left the inscription «child of a murderer» when crossing the Ukrainian-Moldovan border (https://t.me/avturow/435?single).
According to Artem Turov, they got it from the border guards and the mother of the child — in the woman’s passport they wrote «bitch you will die», «you all Muscovites will be in zinc coffins», «we will kill you all», after which they tore the last two sheets from the passport and defiantly burned them.

4. Arrests of public figures and journalists associated with the Russian national-cultural community in Ukraine and persons indirectly related to the conflict.

On March 19, in Odessa, SBU officers searched the house of the editor-in-chief of the Timer website Yuri Tkachev and detained the journalist. He was suspected under article 263 of the Criminal Code — illegal handling of weapons and ammunition (explosives were found during the search; according to Tkachev’s wife, explosives were planted)(https://strana.today/news/382751-jurij-tkachev-zhurnalista-otpravili-na-mesjats-v-sizo-posle-zaderzhanija-sbu.html).

As part of this case, the court determined Tkachev a preventive measure in the form of detention in a pre-trial detention center for 1 month with an alternative to paying bail in the amount of 1 million 230 thousand hryvnias. According to Tkachev’s wife Oksana, the journalist’s lawyers are preparing an appeal against the court’s decision. The family does not have such an amount for bail, so they hope for a mitigation of the preventive measure in the appeal.

«The case was opened on the grounds of articles 110, 111 (encroachment on territorial integrity and high treason), but suspicion was raised under article 263 — illegal handling of ammunition and explosives. As for the measure taken, initially the prosecution offered 2 months of detention or about 2 million hryvnia bail. As a result, the court decided to send Yura to jail for 1 month or to be released with a bail of 1 million 230 thousand hryvnias. According to the article presented to Yura, 263, the preventive measure could have been in the form of house arrest, or the bail amount was much lower, but they went the other way. Our lawyer considers this decision illegal and will file an appeal,» Oksana said.

After the arrest of Yuri Tkachev, a new channel allegedly started working in Telegram on his behalf, but friends deny that the channel belongs to a journalist.

Human rights activist Oksana Chelysheva commented on the situation with the arrest of Yuri Tkachev.

«All statements that Yuri Tkachev opened a new channel in Telegram after his alleged release from the SBU are lies.

I was able to contact Yuri’s wife Oksana. She said that Yuri is being interrogated by the SBU, and she has no way to enter her husband’s resources, because all the computers are in the hands of the SBU.

A lawyer is not allowed to see Yuri. Oksana said that they really need attention.

According to her, when Yuri opened the door of the apartment, he did not offer any resistance. Despite this, the SBU dragged him to the playground, laying him face down.

They also asked Oksana to leave the apartment. No violence was used against her.

Oksana claims that through the open front door she saw one of the SBU officers enter the bathroom and stay there for several minutes. It is in the bathroom that in a few minutes the SBU will «discover» «a grenade and a TNT block,» Oksana said.

After the man left the bathroom, the SBU took Yuri and Oksana back to the apartment, where the search began.

At the same time, they forced Yuri to undress. He was allowed to get dressed only before taking him away.

Oksana said that they are asking for maximum attention to the situation with Yuri. Please don’t write anything on Yuri Tkachev’s channels.»

The mayor of Kupyansk, Kharkiv region, Gennady Matsegora, who on February 27 announced cooperation with the Russian military, reported the abduction of his 20-year-old daughter Daria, who had been in Ivano-Frankivsk since the beginning of hostilities(https://strana.today/news/383176-obvinennyj-v-hosizmene-mer-kupjanska-matsehora-zajavil-chto-eho-doch-uderzhivajut-v-sbu-.html).

In his appeal, Gennady Matsegora said that his daughter was being held in the SBU. He appealed to the President of Ukraine Vladimir Zelensky with an appeal to judge him, not his daughter.

«Vladimir Alexandrovich, if you think that I committed an official crime and did not stand up to an armed army alone without a weapon, judge me,» said Gennady Matsegora.

5. Violations of the rights of believers belonging to the Ukrainian Orthodox Church of the Moscow Patriarchate.

Since the beginning of March, representatives of the so-called «Orthodox Church of Ukraine» (PCU) have seized six churches of the Ukrainian Orthodox Church of the Moscow Patriarchate in the Vinnytsia region. This was reported in the information and educational center of the UOC-MP(https://news.church.ua/2022/03/22/u-vinnickij-jeparxiji-pcu-prodovzhuje-rejderstvo-pid-chas-vijni/).

In particular, temples in the villages of Malye Krushlintsy, Lavrovka, Sosenka, Penkovka, Mezyakovsky Farms were subjected to raider attacks. Some attacks were carried out by the invaders in the presence of the police, who did not interfere with the attackers. It is reported that provocations are being prepared in the villages of Osipovka, Gurevtsy, Migalevtsy, Voronovitsa and Medvedka.

Violation of the rights and legitimate interests of national communities in Ukraine (March 9-18, 2022)