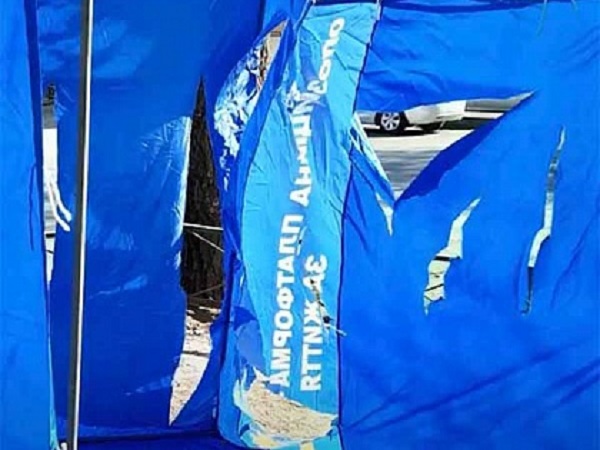 On October 20, in Rubizhne and Kremenna, in the Luhansk region, unknown persons with knives attacked the campaign tents of the OPPOSITION PLATFORM FOR LIFE.

According to eyewitnesses, the malefactors, dressed in black clothes and masks, acted according to the same scheme: two ran up to the tents with knives, cut up property, and the third filmed what was happening on camera. The attackers moved in two cars.

And if in Rubezhnoye only the tent was damaged at the hands of the attackers, then in Kremennoye the attackers used a gas canister in the attack — the injured agitators sought medical help at the local hospital.

The Luhansk regional organization of the OPPOSITION PLATFORM — FOR LIFE stated that such attacks are a political order, organized not without the participation of political opponents, and expressed the hope that law enforcement agencies will find the perpetrators and bring them to justice.

In turn, the National Police of the Luhansk region reported that on October 20, the Kremensky police department received an anonymous message that on the street. Friendship is a fight. The police at the scene found that unknown persons in black clothes damaged the campaign tents of one of the political parties and fled the scene in two cars.

In Rubezhnoye, an attack on a tent took place in the Central Market area — two cars drove up to the campaign tent, from which unknown persons in balaclavas emerged, cut the campaign tent with a knife and fled the scene.

«Now the police are conducting urgent investigative and operational actions, identifying persons involved in the commission of offenses and deciding on the qualification of these events,» the police said.