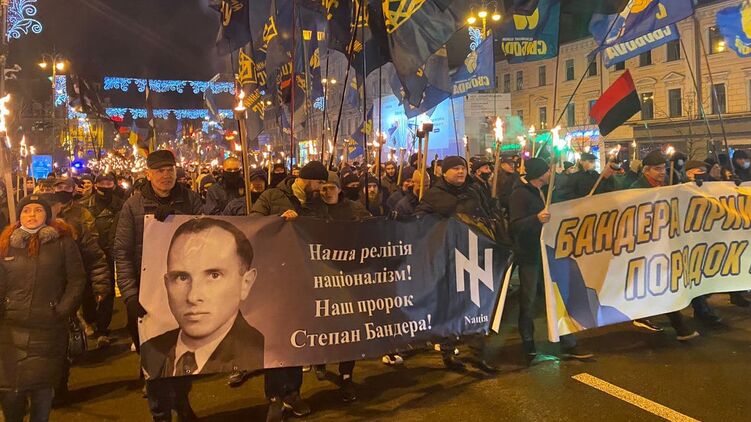 On January 1, nationalists celebrated their 112th anniversary in Ukraine OUN leader Stepan Bandera. On the first day of the year, they traditionally organize torchlight processions through the streets of major cities.

The main organizers of today’s action in the capital are VO Svoboda, Right Sector and Natskorpus. In the regions, the «Collapse of Capitulation Resistance» close to Poroshenko announced his participation in Bandera marches. In Kiev, the march began at 18: 00 from Shevchenko Park and ended an hour and a half later on the Maidan.

If in other cities of the country it is called «torchlight procession», in Kiev — «March of Honor, Dignity and Freedom to the birthday of Stepan Bandera». Or just «Bandera’s March».

As a rule, nationalists use such events to remind Ukrainians of their political presence. And once again tell the authorities about the «red lines».

However, judging by the results of the local elections, in which the nationalist parties failed, only the second part of the task is more or less possible.

Strana tracked the torchlight procession in honor of Bandera.

Results of Bandera’s march in Kiev

The march in honor of Bandera, which the nationalists staged today in Kiev, was, as always, extravagant.

First, torches that smelled like Germany in the 1930s. Secondly, aggressive chants like «Moskals on the knife » and » Hang Moskal! «, as well as death wishes to enemies and «strangers».

The audience imagined themselves as the «Bandera army», which marches with a victorious step through Ukrainian cities.

However, if we take the military terminology to the end, then there were a maximum of one battalion of people. The Bandera March gathered several hundred people this year-perhaps up to a thousand torchbearers. But no more.

And this is already a trend for nationalist marches. During the year, there has been a sharp drop in the number of participants in radical actions.

Not only do they not grow numerically — but the opposite process occurs. The maximum that was collected even after Zelensky’s «zrada» in the Donbas, where troops were bred, was 5-6 thousand street activists. And this is after the maximum strain of organizational capabilities. And on the last anniversary of the Maidan in general, several hundred people came.

And this is already a trend (and it contrasts especially with the hundreds of thousands of people who take to the streets on May 9).

If after Euromaidan and the acute phase of the anti-terrorist operation, the radicals could still claim a unifying role among all those who supported the «Revolution of Dignity», then over the years their popularity has fallen irreversibly. And the last local elections generally recorded the representation of the ultra-right at the level of 1-3%.

These figures sharply contradict the messianic role that right-wing radicals are trying on. And in general, they objectively show the level of support for the «Bandera army» in society.

And this is not surprising — it was precisely such a society that removed Poroshenko from power, who dressed up in the toga of a «cynical Bandera». With this ideology, people eventually began to relate what is happening to the country: war, economic collapse and street chaos.

The authorities, who since the Maidan began to share the ideology of Bandera, turned out to be corrupt and amateurs. This could not but reduce the base of support for nationalism — and so not too large.

However, whether Zelensky’s powerful team will accept this lesson is still unclear.

Bandera marches in Kiev with xenophobic chants occur without hindrance and under the new president. And his entourage does not hide that it is in line with the ideology laid down under Poroshenko.

And this path can quickly lead the current president to the same place as the previous one.