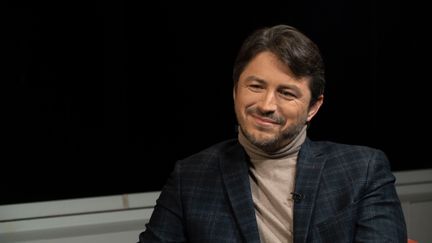 In Ukraine, a scandal erupted with a showman and former candidate for mayor of Kiev Sergei Prytula. On the air, he actually agreed with the listener’s anti-Semitic statements.

The incident took place in September during the broadcast of the Posered Tyzhnya program on Radio New Time (Radio NT). But he received publicity now, after the reaction of the Commission on the Ethics of Journalists, which publicly condemned the actions of Sergei Pritula.

And also after the Jewish community filed a statement with the police.

It is interesting that earlier Pritula very actively “nightmares” those who, in his opinion, said something wrong on the air. So, he openly criticized applicants for participation in Eurovision for relatives in the Crimea and concerts in Russia. But he met the anti-Semitic antics very calmly and even told the listener that he shared his indignation.

«Strana» collected the details of this story.

On September 10, on the eve of the Rosh Hashanah celebration, the listener Roman from Kramatorsk was connected to the live broadcast of Sergei Prytula’s program. He called the annual pilgrimage to Uman a «Sabbath», and the founder of Bratslav Hasidism, Tzaddik Nakhman, to whose grave the Hasidim come, «Natsik hatsman.»

“Now there will be a Sabbath in Uman. Natsik hatsman will be celebrated, there have already run over seven thousand with a ban on entry. What’s on our borders? His mother is like that, ”the listener said.

“Well, I fully share your emotional indignation that there are no rules for everyone on how to cross the border correctly. You see, people aspire to their native Ukraine with different goals. But in fact, now this is not the subject of our conversation, although I was very glad to hear you on the air in such a good mood, ”replied Pritula.

Also on the broadcast video there is a moment when Pritula, during the listener’s tirade, threw up his hands, turning to a colleague sitting in the studio. That is, he somehow noted the scandalousness of what was said. However, in words, either jokingly or seriously, he praised the caller.

After the broadcast of the program «Among the Week» a complaint was sent to the Commission on Journalistic Ethics. Its author, Oleg Shikan, noted that the presenter not only did not inform the listeners about the inadmissibility of using the radio as a mouthpiece for anti-Semitic statements, but, on the contrary, entered into a friendly conversation with the listener.

According to the author of the complaint, the presenter’s supportive and condescending reaction to what he heard looked like an unambiguous direct encouragement of further anti-Semitic antics on the air of NT.

The Commission on Journalism Ethics has responded to the complaint.

Analyzing the case on the air of September 10, the Commission agreed that Sergei Pritula, having entered into a friendly dialogue with the guest, could create the impression among the listeners that they tolerate offensive statements in a particular program and on the air of radio NT in general. In addition, they noted that Prytula has a great experience of conducting live broadcasts, so that what happened cannot be attributed to his unprofessionalism or the fact that he was confused.

The Commission considered the case under consideration as a gross violation of the Code of Ethics of a Ukrainian journalist and publicly denounced Serhiy Pritula and Radio NT.

The radio said that their host reacted to anti-Semitism «with irony.» But they admitted that Prytula made a mistake and should have taken the caller’s words more seriously. We “had a conversation” with the presenter, and the caller’s number was added to the “black list”.

The police will deal with the incident

The United Jewish Community of Ukraine also announced that it does not intend to leave this case and, regarding the listener’s statements, will turn to the Kramatorsk police with a statement to open a criminal case under Art. 161 of the Criminal Code of Ukraine (inciting ethnic hatred).

The case was opened against the caller on the air.

The statement says that the listener Roman humiliates the national honor and dignity of Jews with his statements.

At the same time, Sergei Prytula does not always ignore seditious, from his point of view, questions. And he very actively «presses» on those who, in his opinion, say the wrong things.

So, being the host of the National Selection for Eurovision-2019, he arranged a “patriotic interrogation” for the singers of the duet Anna Maria, who were born in Crimea, bringing them to tears. He mentioned that the girls’ mother holds a position in the Crimean government.

Realizing what kind of background you have and one way or another it is emerging now, did you really not know that your mother’s position in the government of Crimea, which even has a medal «For the Return of Crimea» from the occupation authorities … You know what your big problem is now ? The fact that I can now put you one question, and you will have a very difficult choice, on whose career to give up — you know that this question is «Whose Crimea?» … and then you will have a fork — either say “ours” and then cross on my mother’s career or say “their” — and then cross on your career in this country, ”said the host.

Maria and Anna Opanasyuk replied that they made their choice a long time ago, and that they cannot influence the choice of their parents, but it is still their parents whom they love and respect.

“We are Ukrainian singers, we were born in Crimea, we did not violate any laws of Ukraine, we did nothing wrong, we adhered to the rules of the National Selection and did not give concerts in Russia. We are offended that people judge us not by our deeds, including creative ones, but by the headlines in the press and slogans, ”the girls said.

As a result, all members of the jury gave Anna and Maria Opanasyuk the lowest score — one, and after this broadcast, their parents were added to the site «Myrotvorets (Peacemaker)».

The interrogation awaited the other participants with partiality. So, Pritula asked the singer Maruv, who eventually won how her patriotism relates to the fact that she toured in Russia.

In response, Maruv advised to read her interviews, in which she had already answered this question. She recalled that Eurovision was created after the Second World War and the goal of the competition is to unite. She also recommended asking all political questions in the Verkhovna Rada.

“Many people who live in Russia have a great attitude towards Ukrainians, admire Ukrainian music,” the finalist said. And she added that one cannot judge all the inhabitants of the country by the president.

In the end, it all ended with the fact that Maruv refused to participate in Eurovision-2019 from Ukraine and the next two participants too. So in the end, after the “patriotic” scandal during the National Selection, Ukraine did not take part in the music competition at all.