Hungarian MEP got on «Myrotvorets (Peacemaker)» 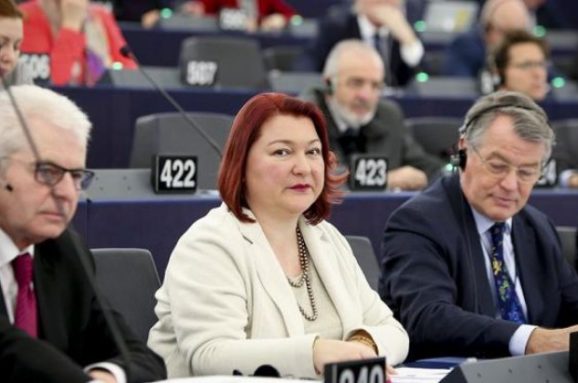 MEPs urge Ukraine to deal with the «Myrotvorets (Peacemaker)». According to them, the «death list» only incites hostility towards members of the European Parliament and members of the Hungarian community in Ukraine.

The conflict between Ukraine and Hungary over the rights of Ukrainian citizens of Hungarian origin has been going on for several years. Another reason for a new round of tension was the inclusion of MEP Andrea Bochkor in the «death list» on the site «Peacemaker». What reason? Center «Peacemaker», (which does not hide cooperation with the Ukrainian authorities), accused the Hungarian deputy, neither more nor less — of an attempt on the sovereignty and territorial integrity of Ukraine.

“Despite the fact that Andrea Bochkor is a native of Beregovo and a citizen of Ukraine, in the European Parliament she represents the interests of the political party Fidesz, whose leader is Hungarian Prime Minister Viktor Orban,” the website says.

According to «Peacemaker», Bochkor uses his powers as a deputy mainly to exacerbate Ukrainian-Hungarian relations and criticize the Ukrainian authorities at the level of the European Parliament.

In a letter to David Sassoli, the head of the Fidesz delegation, Tamas Deutsch, draws attention to the fact that Andrea Bochkor has been a member of the European Parliament and a representative of the delegation of the Hungarian People’s Party since 2014, and also represents Hungarians living in Ukraine.

Let us remind you that Andrea Bochkor called the searches of the SSU in the Society of Hungarian Culture in Zakarpattia as political pressure and intimidation.

A group of MEPs criticized the actions of the Ukrainian authorities against the Hungarians living in Ukraine after the SSU officers conducted searches in several Hungarian organizations in Zakarpattia. The parliamentarians asked the head of European diplomacy, Josep Borrell, for an explanation when the EU would take measures and stop hushing up cases that threaten the existence of national minorities in Ukraine. Political analysts believe that the situation with the Hungarians in Zakarpattia seriously harms the image of Ukraine and may lead to a decrease in financial assistance to Brussels.

The parliamentarians added that since 2017, the Ukrainian authorities have systematically violated the rights of national minorities — this was initiated by the adoption of laws on education and the state language. According to them, hate speech against Hungarians is heard in the media in Ukraine, hate crimes are committed, marches and provocations are organized by paramilitary nationalist groups and the Myrotvorets website.

Another aggravation of the conflict between the countries occurred during the local elections in 2020. Then the Hungarian authorities called on Ukrainians in Zakarpattia to support the «Party of Hungarians of Ukraine». On October 26, Ukraine banned two high-ranking officials from Hungary from entering because of campaigning.

On the Day of Dignity and Freedom, November 21, the deputies of the Syurt Territorial Community in Transcarpathia, after taking the oath, sang the hymn of Hungary. The Hungarian Embassy in Ukraine said that it was not a hymn, but «the national prayer of the Hungarians.»

The situation was similar in 2019. Then the Minister of Foreign Affairs of Hungary Peter Siyjarto took part in public events in the Transcarpathian region at the invitation of the candidate for people’s deputies Vasily Brenzovich and conducted an open campaign.

And in October 2018, the Ministry of Foreign Affairs of Ukraine declared the Hungarian consul persona non grata in the Transcarpathian city of Beregovo. This happened because a video of the issuance of Hungarian passports at the Hungarian consulate in Beregovo appeared on the network.

Earlier, in 2017, a law on education was adopted in Ukraine, according to which, in schools of national minorities, teaching in the native language was left only in grades 1-4. The Hungarian government believed that this law violated the rights of national minorities (in particular, ethnic Hungarians in Transcarpathia) and demanded that it be repealed. After that, Budapest began to actively block the holding of meetings of the NATO-Ukraine Commission at the level of ministers and leaders of states, and continues to do so to this day.

Also in 2017, Hungarian Deputy Prime Minister Zsolt Chemien advocated the autonomy of Hungarian communities living abroad, in particular, in Zakarpattia. As for the passport conflict with Hungary, it has also been dragging on for several years. Back in 2014, Orban spoke about dual citizenship and autonomy for the Hungarians of Zakarpattia.

What Political Scientists Think of the Looming Conflict

Ukraine and Hungary began to conflict long ago. Experts say that since the days when Viktor Orban came to power (he took over as prime minister back in 2010).

Andriy Martynov, a leading researcher at the Institute of the History of Ukraine of the National Academy of Sciences of Ukraine, believes that as long as this government with tough nationalist rhetoric remains in power, a periodic exacerbation cannot be ruled out.

“The current phase of the conflict has been ripening since the local elections on 25 October. Istvan Grezhe, the Hungarian government’s representative for Transcarpathia, made a lot of efforts to win the «Party of Hungarians of Ukraine» in the areas of compact residence of Hungarians in Transcarpathia. We need to get the situation out of a purely bilateral conflict. Hungary as a member of the EU and NATO has certain problems with the Hungarian minorities in Slovakia, Serbia, Romania, ”Martynov says.

Oleksandr Khmelevsky, Ph.D. in Economics, an independent expert, is convinced that Hungary seeks to establish control over Zakarpattia and actively interferes in the internal affairs of Ukraine, demands the creation of an autonomous Hungarian region, distributes Hungarian passports to Ukrainian citizens, and the like.

“Hungary is trying to put pressure on Ukraine through the European and North Atlantic structures. In particular, it has been blocking Ukraine’s negotiations on NATO membership for several years now. However, Hungary itself has a scandalous reputation in Europe. Thus, certain norms of its national legislation do not comply with EU requirements. Hungary recently vetoed the EU budget and the program to save the EU economy from the consequences of the epidemic, which caused discontent among other EU members, ”says Khmelevsky.

Political analyst Serhiy Bykov noted that if the authorities in Hungary in Transcarpathia continue to consistently defend their interests, it will soon seriously hit the budget of Ukraine.

“Indeed, the Ukrainian authorities have repeatedly asked for help, begging for money from the EU, either for infrastructure projects or charity. Hungary’s statements as a member of the European Union harm the image of Ukraine and may subsequently lead to the fact that Brussels will reduce its financial assistance, «the expert commented.