Brass knuckles, bats, tear gas: UOC believers about the storming of the church in Mikhalche 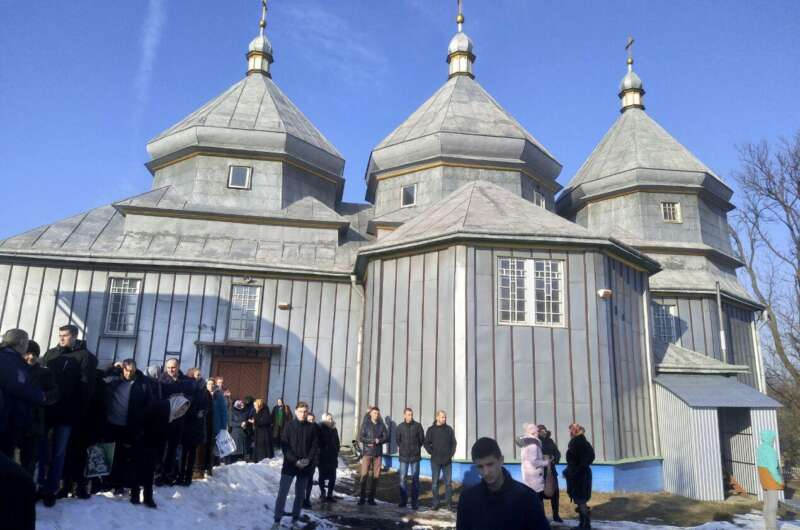 Believers of Mikhalchi, who have been standing in prayer for almost two years and have been on duty at their church, spoke about today’s attack by supporters of the OCU.

Participants of the next assault on the Holy Dormition Church in the village of Mikhalcha, Storozhynetsky district, Chernivtsi region, which took place on December 12, 2020, came to seize the UOC temple with brass knuckles, sticks and tear gas. A video with eyewitness comments was published on the Pravoslavniy Zhurnalist («Orthodox Journalist».) YouTube channel. “

Today is the year and ten months since we are doing the prayer stand. Today there was an attack by strangers and residents of the village of Mikhalcha, supporters of the OCU, on our church. They sprayed gas at us, beat us with shovel cuttings. Look what they have done with our church — they are not people, but some vandals, ”said the Orthodox residents of Mikhalchi.

The believers noted that this is the third attack on their temple. After the previous ones, the last of which was in November 2019, members of the UOC community are on duty around the clock on the parish territory, and have also installed video cameras and a warning siren.

This morning, they said, supporters of the OCU damaged the cameras, blew off the siren and pushed those on duty behind the church fence, blocking their entrance. To prevent the believers of the UOC from entering the territory of the temple, they hung chains on the gate. People who tried to approach their church were pushed out with the words «Moscow on the way out.»

When the abbot ran to the temple, according to eyewitnesses, church raiders began to beat him in the chest with sticks — so that the priest fell to the ground.

“They called themselves patriots of Ukraine. And what kind of patriots are they when they destroy their temple? Brass knuckles were seized from one of them and, apparently, many were hiding brass knuckles under their mittens. This is not the first trip of people with such weapons to our temple, but the Lord has mercy on us. Today the iron sledgehammer was taken out, a whole armful they had prepared to beat people. The police also filmed that there were firecrackers, smoke bombs, ”said believers of the UOC in the village of Mikhalcha.

As the UOJ reported, on the morning of Saturday, December 12, 2020, raiders from the OCU staged another assault on the Holy Dormition Church of the UOC in Mikhalche. Before the arrival of the police, OCU activists, most of whom were specially brought to Mikhalcha to seize the church, tried to enter the church through the vestibule, but did not manage to get inside.

Recall that since February 10, 2019, the religious community of the UOC in the village of Mikhalcha has been performing a prayer stand for peace in Bukovina and the right to freely profess the Orthodox faith. The community was illegally re-registered into the OCU against its will, and supporters of the newly formed structure carry out regular raider attacks on the Holy Dormition Church. During a previous takeover attempt, activists knocked out the doors of the temple with a homemade ram. On December 23, 2019, the Mikhalchi village council supported the transfer of land under the UOC temple to the OCU supporters.