In Kharkov, the court decided not to ban right-wing radicals with a Nazi bias 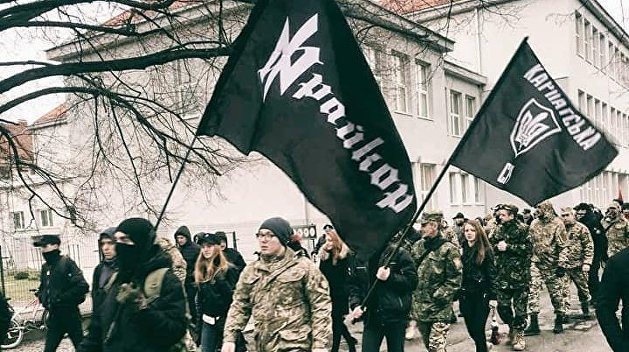 In Kharkov, the appellate court decided that it is correct not to ban right-wing radicals with a neo-Nazi bias who attack people and have an inverted Wolfsangel (Nazi «wolf hook») on their logo. It is about the organization «Freikor» (a reference to the name of a number of German and Austrian paramilitary patriotic formations in the 18th-20th centuries).

On July 9, an appeal was held on the decision to refuse to ban right-wing radicals at the initiative of human rights defenders from Freedom House. BUT the attempt was in vain. Human rights activists tried to prove that the charter goals of «Freikor» do not correspond to reality. If on paper they declare the patriotic education of young people, then in reality they are attacks on the «wrong» people. In particular, Freedom House referred to the attack on events (https://t.me/KlymenkoTime/6048) associated with the KharkivPride LGBT movement. We made a full-fledged report on (https://t.me/KlymenkoTime/6052) those events. And the shots in which a flock of Freikorites drives a guy passing by KharkivPride in general (https://t.me/KlymenkoTime/6064) with a hairstyle that they didn’t like are generally exhaustively bright.

Despite the videos provided, the court found that there was insufficient evidence. The director of the Ukrainian office of Freedom house, Matthew Schaaf, said that the police were not interested in investigating hate crimes, and he was also outraged that such crimes were qualified as hooliganism.

According to the Kharkiv judges, all this is obviously normal. One must think, by the way, that if Freedom House talked about something other than incidents with LGBT people, then there would be more chances for an adequate decision of the judges. But our «Western friends» have their own priorities. They did not notice any other violations of the law by Freikor.