In restaurants, banks and cemeteries. The service sector will be transferred to Ukrainian 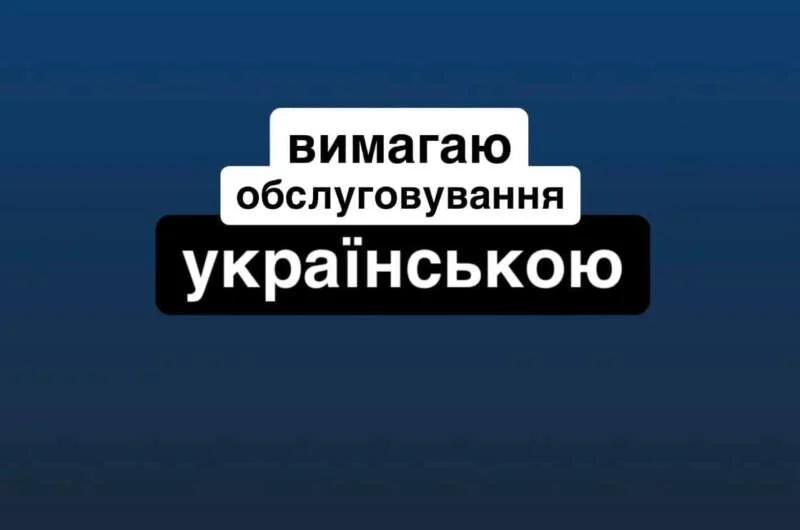 The Ombudsman for the Protection of the State Language Taras Kremin reminded Ukrainians on Facebook that from January 16, 2021, in accordance with Article 30 of the Law of Ukraine «On ensuring the functioning of the Ukrainian language as a state language», consumer services will be conducted in Ukrainian. The seemingly harmless postik had the effect of an exploding bomb and divided society in two. Some said that this was not even stupidity, but a crime. Second, that communication in public space should be conducted in the state language, and at home everyone can talk as he wants. Vesti.ua figured out how hard the new language requirements are and how they were perceived in the service sector.

The Law of Ukraine «On ensuring the functioning of the Ukrainian language as a state language» entered into force on July 16, 2019. The final and transitional provisions to the law provide that some of its articles have a deferred effect. Thus, the notorious Article 30 «State language in the sphere of consumer services» comes into force 18 months after the adoption of the law, i.e. January 16, 2021.

It provides, in particular, the following items:

• the language of customer service in Ukraine is the state language (that is, Ukrainian).

• enterprises, institutions and organizations of all forms of ownership, individuals — entrepreneurs, other business entities serving consumers, serve and provide information about goods (services), including through online stores and online catalogs, in the state language. Information in the state language may be duplicated in other languages.

• at the request of the client, he can be served in another language acceptable to both parties.

• all information about the product must be provided in the state language, but may be duplicated in any other language.

More specifically, which enterprises the requirement concerns, the language ombudsman explained. “In a supermarket and an online store, in a cafe, in a bank, at a gas station, in a pharmacy or a library, wherever you are — the service should be in Ukrainian. Only at the request of the client, his personal service can be carried out in another language,” he wrote and invited everyone who was not served in Ukrainian to write complaints to his email address.

The procedure for considering a complaint is spelled out in Article 55 of the Law. It must contain the surname, name, patronymic, place of residence of the applicant and the essence of the complaint. If the complaint is made in writing, it must be signed and dated. In the electronic complaint, you must indicate the email address to which you will receive a response. After the transfer of the complaint to the ombudsman, he has 10 days to familiarize himself with the document and make a decision, and this can be:

1) language expertise in accordance with the procedure established by the Cabinet of Ministers of Ukraine;

2) control over the use of the state language;

3) leaving the complaint without consideration.

After making a decision, the language ombudsman has another 30 days to consider the complaint, that is, to fulfill the first or second paragraph. This period may be extended.

The Commissioner can independently do control over the use of the state language. Its functionality is spelled out in Article 56, which, however, does not at all give an understanding of how the ombudsman or his representative will, for example, check whether they serve in Ukrainian in a particular store. Logically, Kremin should become something of a mystery shopper, but the law says for the most part that he can get the necessary documents and information. The result of the check is an act describing the violations found.

The violator is issued a warning and within 30 days from the date of drawing up the act, he is obliged to correct, according to Article 57. If within a year he violates the law again, the authorized person or his representative writes out a protocol and a fine, a fine in the amount of three hundred to four hundred non-taxable minimum incomes of citizens or 5100 -6800 hryvnia.

How the news was perceived in Kiev

“Have you ever thought about the fact that if prostitution is legalized in Ukraine, then prostitutes will have to communicate with clients exclusively in Ukrainian?” — Political expert Denis Gorokhovsky mocked on Facebook. “You may not have known, but this is the only reason why the idea of legalization is no longer discussed. And all after the adoption of the law on the functioning of the Ukrainian as a state, ”- they quipped in response.

Amid a bitter controversy on social media over the language of customer service, those who will have to serve these customers remain calm. The representatives of the catering sector, with whom Vesti.ua spoke, for the most part admitted that they had not yet studied the document thoroughly, but did not see anything threatening in it. “We know that there have been scandals on the basis of language, when they refused to serve visitors in Ukrainian, or vice versa, did not serve those who made an order in Russian. We want our guests to feel comfortable, so we will try to please them in the future, ”they told us in a restaurant located in a residential area of ​​Kiev. They say that among the restaurant’s customers there are many who have recently moved to Ukraine, and these are Mongols, Vietnamese, Kyrgyz, Tajiks, citizens of African countries. Some of them try to learn Ukrainian or Russian, so they have to express themselves in every possible way. Also, the transition in communication with customers to other languages ​​in the establishments of the city center is not a problem.

The owner of a confectionery shop, who is also a seller, explains that entrepreneurs in Ukraine are dependent people, and every day they have to accept new conditions of the game. “In our family, everyone speaks Ukrainian. If the buyer speaks in Russian, we switch to Russian. Will this be a violation? I hope we’ll figure out how to communicate, ”the woman says.

People in creative professions are least aware of innovations. The beauty salon in the center of Kiev does not follow the news at all. “Will you need to speak Ukrainian with the client? Well, I don’t have to talk at all, it’s my job to cut, although for some reason many believe that they should pour out their souls to the hairdresser, ”jokes the salon master Alina. The girl says that they often go to her by acquaintance, so she does not think that someone will complain about her for questions in Russian.

What about the regions

With the capital, everything is more or less clear. And the law here, judging by how the quarantine restrictions were observed, will also be enforced.

But in social networks, users rightly ask themselves what will happen to Odessa, Kharkov or Dnipro. In one of the branches of the discussion, Odessans wondered why, in an eternally Russian-speaking tourist city, suddenly everyone should speak Ukrainian. In response, they were told that a person living in Ukraine is obliged to know the state language, period, and they gave examples that in France the sellers in shops speak French, and in Germany — in German. The question arises: were Ukrainians well enough taught to speak Ukrainian in order to conduct a dialogue with a client, and if not, then wouldn’t it be better to give them the right to speak the language they probably know, that is, Russian.

Last April, the head of the parliamentary committee for culture and spirituality, Mykola Knyazhytsky, promised that centers would be created in all regions of Ukraine that would teach the Ukrainian language free of charge. And until the time the penalties start to take effect, everyone will be able to learn some more.

So far, we have not heard of any centers. Thus, all responsibility for the Ukrainization of personnel lies with the management of the companies and the people themselves. Of course, knowing Ukrainian is necessary and important, but often Ukrainians confuse knowledge of Ukrainian with surzhik or think that they already speak Ukrainian if Ukrainian vowels are substituted into Russian words or pronounced in a Western Ukrainian manner. But if speech hurts the ear, then this is not a concern for the interests of the consumer. And judging by the mood on social networks, many do not want to be served in Ukrainian.

In addition, as representatives of various spheres note, they often simply do not have a developed terminology.

“Once upon a time we were introduced to the clothing terminology developed by specialists from western Ukraine. There were such words that you will never understand what they mean. And if we spoke such Ukrainian with customers, they would look at us with round eyes, ”an employee of an international chain of clothing stores told Vesti.ua.

How will it end

To soften the blow from the entry into force of the new provisions of the law, the linguistic ombudsman assured that there will be no total control for the purpose of punishment. They say that his task is not to punish, but to protect the rights of citizens to receive information in the state language.

In a comment to the PavlovskyNews telegram channel, Taras Kremin said that during the quarantine they would not arrange inspections to organizations, since everyone is living people, and employees should not be risked during a pandemic.

He also expressed the hope that problems with the transition of customer service to the Ukrainian language will be avoided, and that the law will be enforced. In case of complaints, explanatory work will be carried out. “I hope it will not come to penalties … we are for a smooth transition to the Ukrainian language. We are for tolerance, ”said Kremin.

Doubts that the requirements of the law will turn into far-reaching consequences and the deputy from the Servant of the People faction Max Buzhansky. “… A couple of denunciations, a couple of scandals, one eternal linguistic examination with no result. The mechanism will not work, but it was not planned, the cream has already been skimmed, ”he predicted on Facebook. Buzhansky also recalled that he was trying to achieve the repeal of the law. “The Constitutional Court had to cancel, literally in a day this crisis happened. And there is no will, no one cares. Nobody is protesting near the Rada because of this, ”said the People’s Deputy.