In Kharkiv, another attack was made on the office of the OPFL 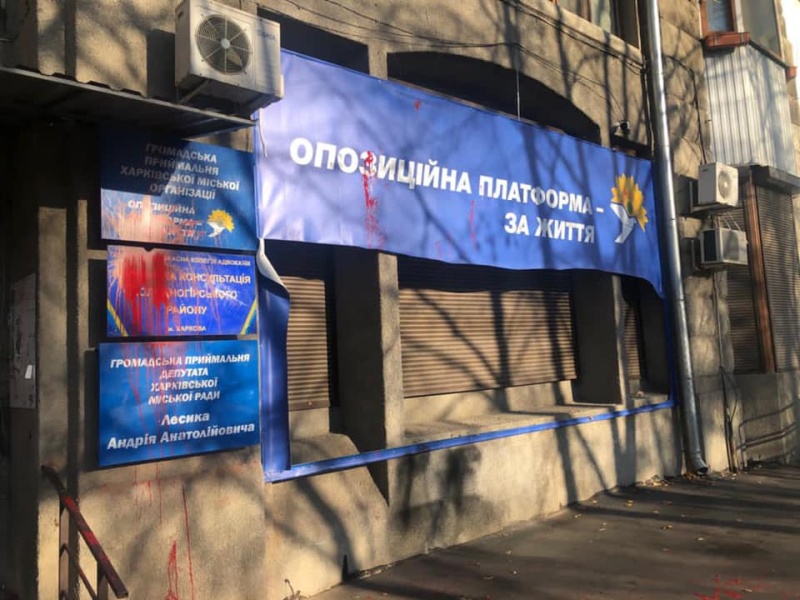 On the night of December 7-8 in Kharkov, another attack was made on the public reception of the city organization of the Opposition Platform — For Life Party and the city council deputy Andrey Lesik.

“This is the sixth attack that pseudo-patriots have made on our reception area in the last three months! As a result of the act of vandalism, the signs and the facade of the building were damaged, and the attackers on their pages in social networks are also proud of their act, publishing posts about it, ”stressed Andrey Lesik.

The politician said that these attacks are carried out solely for political reasons «right next to the building of the Kharkiv Regional Security Police Department, which is adjacent to the public reception area, where the video surveillance cameras are located, but law enforcement officials have not yet brought the attackers to justice for any attack.»

“To commit acts of vandalism is all that pseudo-patriots are capable of! We transferred video from surveillance cameras to police officers and we hope that they will still try to find the intruders. The video shows that one of the attackers, pouring paint on the facade of the office building, got dirty. I think this will help identify the attacker. The video also shows how his comrades photographed their actions and later published a photo on social networks, explaining their action by the fact that it was, they say, a sign of protest against the expression of the will of Kharkiv citizens, who elected the deputies of the «OPFL» are trying to intimidate us! .. We will never retreat from our ideas, but we will continue to protect the legitimate interests of Kharkiv citizens! » — summed up the head of the Kharkiv city organization «Opposition Platform — For Life» Andriy Lesik.