In the village of Zabolotsy in Volyn, the UOC temple was seized 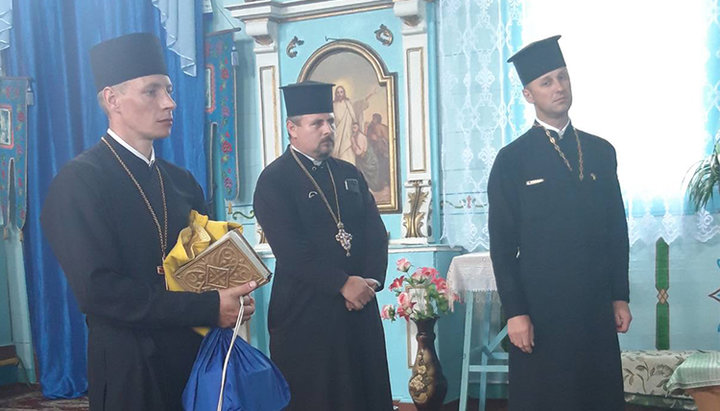 On July 26, 2020, representatives of the OCU broke the locks on the doors of the Holy Cross Church of the UOC in the village of Zabolotsy, Ivanichevsky district, Volyn region. This was reported to the UOJ by the rector of the church, Archpriest John Sybir.

He said that in the morning the believers came to the temple to perform the service. However, the temple turned out to be open, and inside there were already four OCU clerics “serving”.

According to the priest of the canonical Church and his parishioners, the keys to the church were with the headman, and representatives of the schismatic structure broke the locks on the doors to enter the church.

“Today, for the first time since the opening of the church in 1906, the Divine Liturgy has not been sounded in it! Divine services were held during the German occupation, and during the godless Soviet regime, and during the time under Poland. And today, under a legal democratic government, which «makes sure that constitutional rights are not violated,» in particular, the right to freedom of conscience, the temple was sealed and in an arrogant, barbaric way they disrupted the service, «Archpriest John commented on the incident.

Believers of the UOC had to perform in the courtyard of their own church, since the antimension and all church utensils were at the disposal of the schismatics.

The interlocutor of the UOJ Lyubov noted that there were no threats or announcements of intent to seize the church on the eve of the raider attack, but earlier the OCU activists had repeatedly walked around the temple and examined something.

After the “divine service” of the OCU, the believers of the canonical Church and representatives of the schismatic structure closed the temple into two locks and signed a paper stating that no one would enter the temple until the court decision.

During the communication between the believers of the UOC and representatives of the schismatic structure, police officers were present. The rector of the church of the UOC filed a statement to them about the illegal entry of the OCU activists into the territory of the church.

On February 24, 2019, in the village of Zabolotsy, OCU activists voted to transfer the local church under the jurisdiction of the new church structure. According to eyewitnesses, adherents of the schismatic religious structure used the support of the local authorities — elder Alexander Tsibukhovsky, who also participated in the illegal transfer of the UOC church in the village of Belichi to the OCU.

On April 5, 2019, representatives of the authorities re-registered the temple of the canonical Church in Zabolotsi in the OCU.