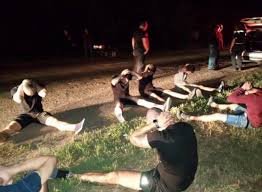 With regard to nine persons involved in this case, the court issued decisions on November 20 and 23.

Six more were released on Tuesday 24 November. According to Shiryaev, the release of the radicals proves that the court’s decision is politicized. “Back in August, President Zelensky thanked law enforcement officers for the prompt detention of the attackers and instilled confidence in us, saying that neither the color of political flags nor political convictions can prevail over the law. But, as we can see, the words of the head of state are at odds with the actions, ”said the coordinator of Patriots For Life.

As Shiryaev said, after identifying the suspects in the pre-trial detention center, the prosecutor’s office of the Kharkiv region initiated a retraining of criminal proceedings, replacing the article “Attempted Murder” with “Hooliganism”.

“What is hooliganism? This is a gross violation of public order with the use of physical force. But everyone saw that it was a cynical attempted murder. Everyone saw the video of the attack on the bus. In broad daylight, the radicals of the National Corps stopped the bus, set it on fire to “smoke” unarmed people from the passenger compartment, after which they began to beat them with sticks, poison them with gas, and shoot at them. Many of the victims have injuries of varying severity and gunshot wounds, ”Shiryaev said.

The organization’s coordinator is outraged by the court decision. “In this case, we did not receive due satisfaction from the Ukrainian justice. We were attacked and we were left without protection from the state, ”he explained.

Shiryaev is also confident that the release of the attackers took place on direct instructions from above. “We know that the decision was dictated by the Office of the President to the Prosecutor General’s Office and from there it was sent to the prosecutor’s office of the Kharkiv region. The police identified all the participants in the attack, but the law enforcement officers told us in plain text: “We cannot do anything. There is a team from the prosecutor’s office and even higher, ”said the coordinator of Patriots For Life.

According to him, President Zelensky personally protects the radicals of the National Corps. “The elections have passed and Zelensky needed them today. Perhaps he feels a threat from citizens whom he wants to «put under house arrest» by introducing another lockdown in the country. No one is defending Zelensky now, neither bloggers nor politicians, and these villains are not costing him much. He thinks that these guys have strength and weapons, so he decided to rely on them and use their hands to eliminate those who disagree with his government, ”Shiryaev said.

At the same time, the coordinator of Patriots For Life stressed that the members of the organization are not afraid of further attacks by activists of the National Corps and are ready to defend themselves. “No, taking up arms is not our method. We will fight in a legal manner, we will go to court. They want to intimidate us. Nobody’s afraid of these bastards. But this has to come to an end, ”summed up Shiryaev.

As reported, in August near Kharkiv on a highway, a group of people blocked the movement of a minibus, in which there were representatives of the public organization «Patriots — For Life», and forced it to stop. After that, several people got out of Mitsubishi, fired at the minibus from traumatic weapons and fled in their car. As a result, 4 people were injured and hospitalized (three with injuries from traumatic weapons, the fourth with a traumatic brain injury).

In the «National Corps» at first they dissociated themselves from the attacking radicals, but later they even awarded them with diplomas and titles. They said that similar attacks will continue, and if law enforcement officers do not fight the political organizations of the current opposition, then «the work of the police, the initiative will be taken by the Ukrainians.»