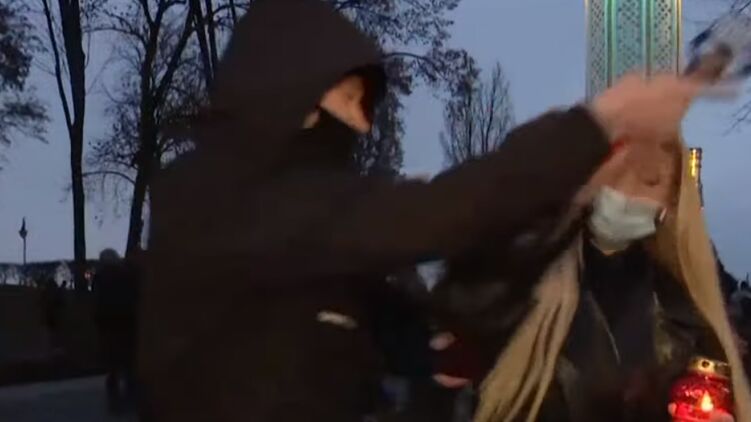 While covering the events at the commemoration ceremony for the victims of the Holodomor in Kiev, an unknown assailant attacked NEWSONE TV journalist Violetta Tovkes.

The video of the incident was posted on the broadcaster’s YouTube channel.

NEWSONE TV channel correspondent talked about the events on the occasion of the Holodomor Remembrance Day on the air. At 16:03 a guy in a mask approached her and knocked out the microphone and the memorial candle, after which he began to push the journalist. The man accompanied his actions with furious shouts.

After some time, the attacker left. After the incident, Tovkes showed the broken microphone and stated that she intends to turn to law enforcement officers on the fact of the attack on her.

In turn, the broadcaster released a statement on today’s attack.

“NEWSONE TV channel demands from law enforcement agencies to initiate criminal proceedings on the fact of an attack on a TV channel journalist, which occurred during a live broadcast on November 28, 2020, and to bring the culprit to justice (Article 345-1 of the Criminal Code of Ukraine). The TV channel also takes control of the investigation into this fact of violence. We would be grateful for providing information and information about the identity of the attacker. We guarantee anonymity and reward, ”the TV channel’s press service said.