Why Hungarians in Zakarpattia were again accused of separatism 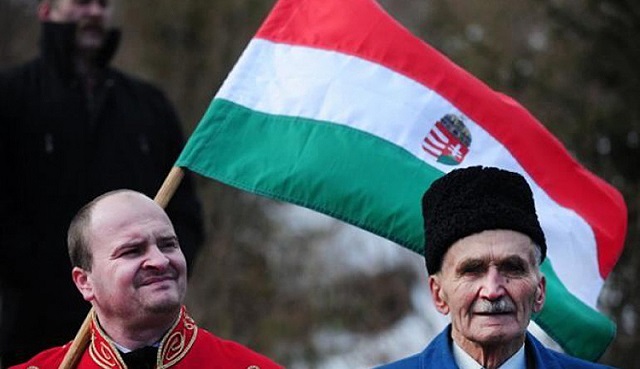 In Zakarpattia there is a scandal around the local Hungarian community, whose leaders were searched by the SSU.

We are talking about the Hungarian fund «Egan Ede», which finances Zakarpattian entrepreneurs, ethnic Hungarians, and which is credited with «activities aimed at violating the state sovereignty of Ukraine.»

The leader of the local Hungarian party and the head of the foundation, Vasily Brenzovich, is suspected of “subversive activities to the detriment of Ukraine” and of “treason”.

His office was searched and leaflets were allegedly found that popularize the so-called Great Hungary and the creation of autonomy in Zakarpattia.

The foundation, which has been operating for several years, dismisses accusations of separatism and explains that, on the contrary, they are helping to develop the economy of Zakarpattia and stop mass labor emigration.

The Society of Hungarian Culture of Zakarpattia stated that in fact this is a planned operation carried out on fabricated political accusations, the purpose of which is not only to exclude the activities of Hungarian organizations, but also «to intimidate the Hungarians of Zakarpattia and their leaders.»

Hungary has already reacted to the searches, summoning the Ukrainian ambassador to the carpet and promising to complain to NATO.

“We will defend the Zakarpattian Hungarians in all international forums,” said local Foreign Minister Peter Siyarto.

We found out what the attack on the Zakarpattian Hungarians is connected with, for the second time in the last two years.

Under Poroshenko, a few months before the elections, the SSU had already opened a case against the fund on charges of separatism. In addition, «Egan Ede» was accused of double-entry bookkeeping, embezzlement of money and fictitious performance of contracted work by entrepreneurs.

Brenzovic at the beginning of March 2020 addressed an open letter to the leadership of the SSU, demanding an end to the political persecution of the leaders of the Hungarian community of the region and «to close all these shameful criminal proceedings that have no real basis.» The leader of the Transcarpathian Hungarians then also said that hopes that the pressure on the Hungarian leaders of Zakarpattia would stop with the election of a new president did not come true.

There are several versions of why the fund was attacked again under Zelensky.

According to one of them, the background lies in the formation of a coalition in the local regional council, where the Hungarian party has a «golden share».

“The Hungarians have taken 8 seats. Servants of the People and Native Zakarpattia (a project of the influential Balog family in the region) have 11 and 12 deputies. Without the Hungarians, they cannot glue the coalition together. It is not possible to come to an agreement on good terms (like under Poroshenko, who wanted to gain the support of the Zakarpattian Hungarians before the elections), they decided to act through criminal cases. But hitting the fund can turn into big problems for the authorities — in response, Hungary can block the smuggling schemes from which they feed in Kiev, and this will hit the pocket of Zelensky’s inner circle. Therefore, the operation is questionable, ”a source in the regional department of the SSU told us.

Another version, which our sources in the power structures of Transcarpathia speak about, speaks of a certain plan of Poroshenko, who lost in the region (the EU took only 6 mandates in the regional council — the same as the OPFL).

“Governor Petrov, who is about to be dismissed, headed counterintelligence under Poroshenko and remained loyal to him, and also has influence on the special services. Now Poroshenko, with the hands of Petrov, is conducting a special operation to create a political crisis between Kiev and Budapest, further spoil the already difficult relationship. And at the same time, to embroil the Hungarian party with the authorities, disrupting the creation of a coalition in the regional council, ”a source tells us.

By the way, Viktor Baloga condemned the searches, called them «a provocation of the special services» and said that such actions lead to the destabilization of the situation in Transcarpathia, to the deterioration of Ukraine’s relations with Hungary and the European Union.

Although no one has made territorial claims to Ukraine yet, Budapest has been issuing passports to Zakarpattiaan Hungarians in large quantities for several years and is helping this Ukrainian region in every possible way.

“The matter may go to the split of Ukraine, the Magyars have invested a lot of money in Transcarpathia for the elections (who do not know), so that the KMKSZ passed, everyone was intimidated. They threatened to take help from the Hungarians, threatened that they would never again have their feet in Hungary if they did not vote for the KMKSZ and their candidates, ”writes the anonymous author on one of the Zakarpattian sites.

Employees of the Hungarian foundation, in a conversation with Strana, disown accusations of separatism and insist that their organization is intended only to help ethnic Hungarians.

“The Fund was established four years ago, with five regional offices — in Mukachevsky, Uzhgorodsky, Beregovsky, Vinogradovsky and Tyachevsky districts of Zakarpattia. Loans are issued for starting their own business in the fields of tourism (for owners of hotels, restaurants) and agriculture. The main goal is the economic development of Zakarpattia, the creation of new jobs, to enable people to return from abroad and provide their families with a stable income at home, in their native land, «said the director of the fund, Marianna Berki, to Strana.

More than 16 thousand Zakarpattian entrepreneurs have already received money to open their own business. Budapest plans to increase funding for Zakarpattia.

According to Ivan Gergardt, an activist from Beregovo, at the expense of Hungarian money, kindergartens, schools, hospitals are being built in the region and financial aid is being paid.

“A children’s hospital was repaired in Mukachevo for 4 million forints (half a million hryvnias). The Hungarians have erected new buildings for the Beregovo District Hospital, send textbooks, computers, desks and blackboards to schools, and build roads, ”he says.

Meanwhile, the «Separatist» theme is being fueled by a new scandal around the taking of the oath in the OTG in Syurt, Zakarpattia, where the head, along with the deputies, sang the Hungarian anthem. “It turns out that they swore allegiance to the neighboring state? We are preparing a Crimean scenario, and then they will cry and moan about the loss of Zakarpattia? It seems the script has been rolled back, ”wrote the author of the video with the anthem on YouTube.