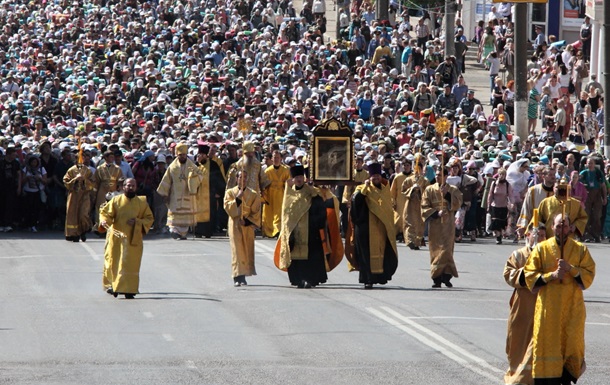 The National Security and Defense Council of Ukraine called the processions «an effective instrument of the Russian hybrid war» and warned the organizers of peace forums about criminal liability. The corresponding statement by the NSDC Secretary Alexei Danilov was published on Friday, September 18, 2020.

“One of the effective tools of the Russian hybrid war against Ukraine is the use of religious structures in the format of holding“ conferences ”,“ round tables ”,“ international forums ”,“ processions ”and the like,” Danilov said, commenting on the main risks and threats associated with with the process of preparing and holding the upcoming elections to local councils. «The purpose of such events is to promote the ideas of the so-called» Russian world «, to justify the Russian aggression against Ukraine, to promote anti-Ukrainian theses of Russian propaganda.»

According to him, it was “such a long-term activity of the special services of the Russian Federation” that led to the occupation of Crimea and part of the territories of Donetsk and Lugansk regions.

“The organizers of various“ peace forums ”would like to remind about the criminal responsibility for anti-state activities and note that the NSDC Office of Ukraine is closely monitoring the situation in the state on the eve of the elections, and the law enforcement agencies of Ukraine will react to any attempts to undermine the internal political situation,” he stressed.

Let us remind you that on August 17, the Holy Synod of the UOC decided to hold a peacemaking forum «People of the World». The organizing committee of the forum, which will be held on September 21 at the Svyatogorsk Lavra, includes well-known Ukrainians who support the peacemaking initiatives of the Church. The purpose of the forum is to develop a program of action to end the conflict and restore peaceful life in eastern Ukraine.

Let people speak better than cannons, said the UOC department manager in response to criticism of the peacemaking initiatives of the Ukrainian Orthodox Church.

The head of the UOC, Metropolitan Anthony of Boryspil and Brovary, urged not to stifle the desire for peace of the Ukrainian people with information cannons. The hierarch responded to criticism regarding the movement towards peace in Donbass on his Facebook page.

On September 18, the secretary of the National Security and Defense Council of Ukraine called the peace forums «anti-Ukrainian activity» and warned the organizers about criminal liability.

Metropolitan Anthony compared the discussions around the peacemaking process with the Gospel story, which describes the healing of the withered Christ on Saturday and the indignation of the Pharisees about this. According to the interpretation of this story, St. John Chrysostom, Christ put the sick in the middle (see Luke 6, 8) so that the Pharisees would be ashamed and soften the sight of his suffering.

“If we transfer these realities to our reality, then I would like to ask several difficult questions,” the hierarch noted. — Is it possible that death, injury, destruction and grief of ordinary people, our brothers and sisters, do not soften the hearts of modern «scribes» and «Pharisees»? What other cup of suffering must we all drink, so that real talk about the world, and not formulations justifying its rejection, can finally sound from all sides? How much longer can you drown out the aspirations of the majority of ordinary people, who are the real and only source of power in our country, with volleys of real and information cannons? «

Vladyka Anthony warned that the peacekeeping process cannot last forever, and if one repels the desire for peace, guided by cliches, then there will be no one to reconcile.

“From the outside, the corresponding manipulations look like a stubborn repulsion of the drowning man from the life buoy,” he compared. — After all, the last one is “the wrong brand, the wrong shape, the wrong one, etc.”. And a drowning man cannot stay on the water forever. And at some point, all these arguments will simply become irrelevant, since there will be no one to save … ”.

The hierarch called for dialogue and building the necessary communication.

“Let people speak better than tools. And let love, kindness and mercy become the basis of this interaction. That mercy, which once, having broken the shackles of dry dogmas and moral teachings deaf to someone else’s grief, became the beginning of the miracle of healing a withered one, ”summed up Metropolitan Anthony.

Danilov’s statement about the UOC does not correspond to his status as a state official and constitutes discrimination, Ruslan Bortnik believes.

The threats and accusations of NSDC Secretary Oleksiy Danilov regarding the peacemaking initiatives of the Church are groundless, and his statement in a state governed by the rule of law would entail his resignation, Ruslan Bortnik, director of the Ukrainian Institute for Policy Analysis and Management, said in a comment to the UOJ.

“Such statements can be regarded as elements of outright unprofessionalism, discrimination or political order,” the expert noted.

A politician can use such value judgments. But a government official, on the contrary, must provide all the opportunities for the Ukrainian Orthodox Church for any forums and events. The UOC is a legal structure, the largest church organization in Ukraine. An official must protect her. «

Danilov’s statement shows that he does not understand what a civil service is, the political scientist suggested.

“In a normal state, such statements would lead to resignation. If something similar were said by an official in the United States or Germany, he would immediately be dismissed, ”he said.

According to the political scientist, the accusations voiced by Danilov are not true.

“On what basis does Danilov draw his conclusions? Obviously not on the basis of some kind of investigation, because the NSDC cannot investigate anything, ”the expert emphasized.

The political scientist advised to invite the NSDC to the peacemaking forum, which will be held by the UOC in the Svyatogorsk Lavra, in order to convey objective information to government officials.

Based on materials from the UOJ