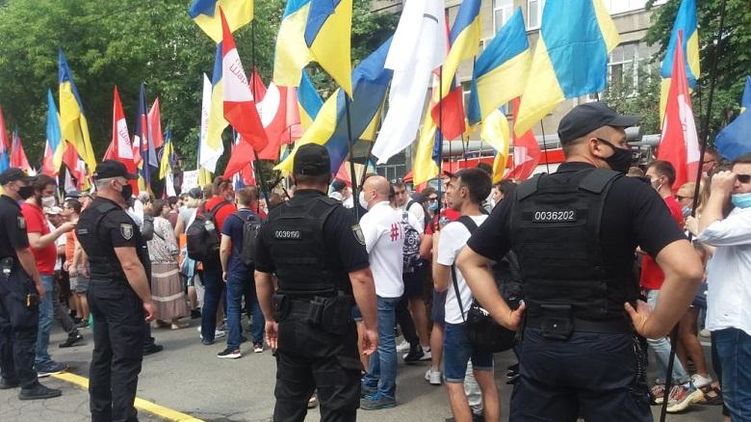 On June 17, during a rally of Ukrainian journalists near the President’s Office in Kiev, members of the “Democratic Ax” public organization began throwing eggs and stones at the Sharia Party supporters. This is reported by the telegram channel Klymenko Time.

“ Democratic Ax came — from their side eggs, stones and bottles of water were thrown at the participants of the action Shariy. Well, nothing else was expected from, forgive, Poroshenko’s utyrkov. Some protesters prudently took umbrellas and opened them. New chant — «Police — work!», — wrote on the channel.

“The fotos, which clearly shows how Yuri Gudimenko from Democratic Sokira (what he is — has already been told many times) gives the command to throw the action of Anatoly Shariy under the OP with eggs and stones.

An obvious provocation, with a threat to the life and health of people. The police pushed back the attackers only after the throw. Nobody has been detained, ”added the telegram.

Later, the police nevertheless began to detain radicals who staged an attack on a column of supporters of blogger Anatoly Shariy in the center of Kiev.

Let us remind that many publications announced their readiness to attend the rally: Vesti, Strana, Shariy.net, Klymenko Time, Pavlovsky News and others.

The initiator was the blogger Anatoly Shariy. The reason was the attack on journalists by radical activists and law enforcement officers on trial over the murderer Sergei Sternenko on June 15.