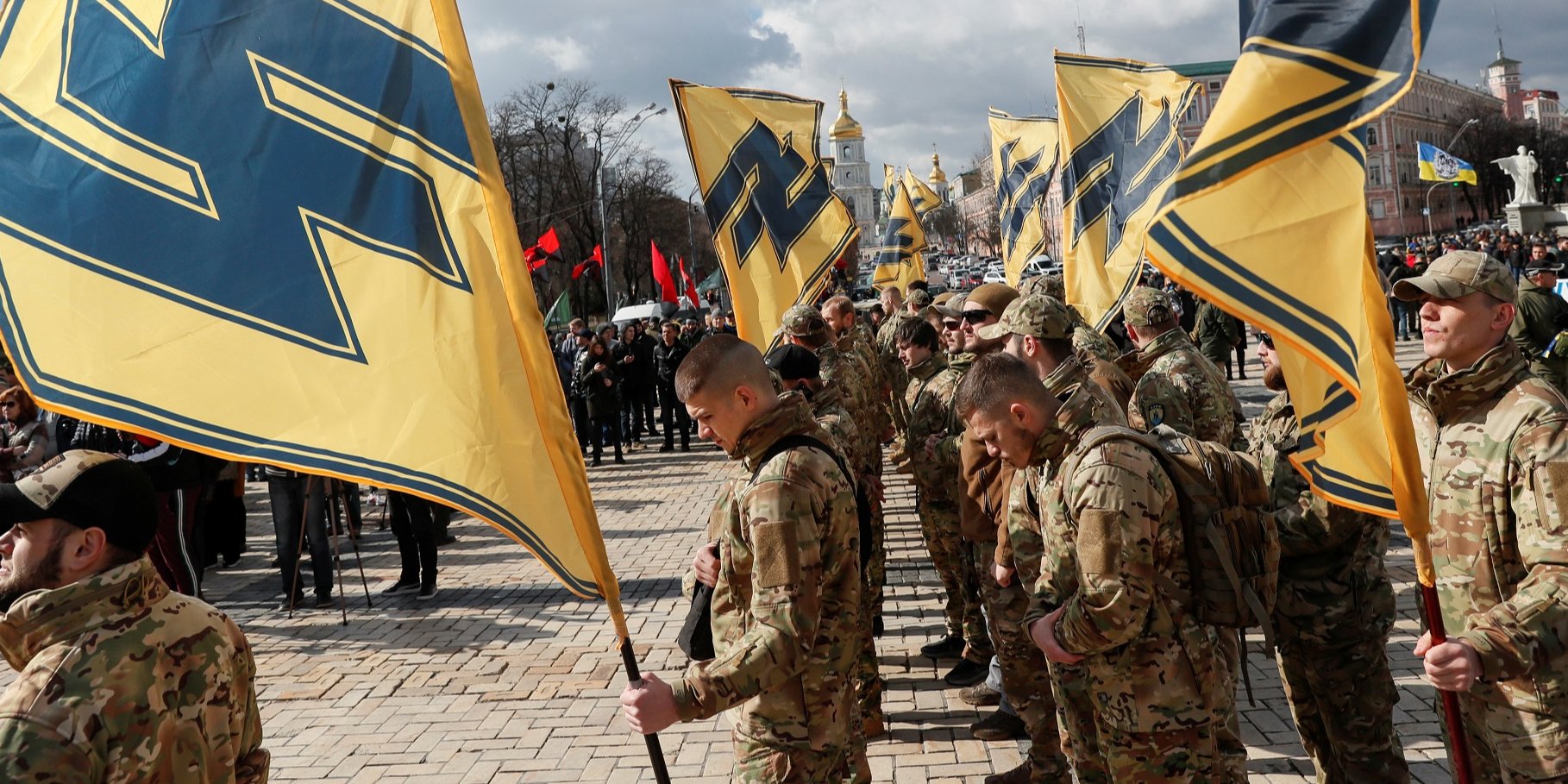 A street war of “activists” began in Ukraine. This is evidenced by the daily reports of the clashes of political opponents. So far, nationalists from the National Corps organization and their conditional opponents represented by adherents of the Sharia party and the power bloc of the Opposition Platform for Life, organized by Ilya Kiva, are participating in the confrontations. The first large-scale clash took place in Rivne, causing many problems for the police. Closer to the elections, the number of skirmishes may increase and become explosive. Of course, if law enforcement agencies do not take drastic measures.

Vesti.ua figured out how Ukrainian street politics will now look like.

How it all started

The trigger that launched the street confrontation in Ukrainian street politics was the rally of the Sharia Party in Kiev. About a thousand people in party T-shirts made a fuss in the center of the capital, and then, in the metro, there were several clashes with the National Corps. In one of the cases, Shariy’s supporters beat a nationalist, in the other, a representative of the blogger’s party got it.

The nationalists were offended by this situation and organized a «safari» on Sharia activists. In their groups, the regional leaders of the National Corps posted a video calling for the capture of the Shariites. They were joined by nationalist organizations in the regions like the Kharkov «Freikor».

The Sharia Party said that their supporters were severely beaten in Zhitomir, Poltava, Vinnitsa, Kharkov, Kherson and other cities. In Poltava, they attacked not only party members, but also their relatives. In Zhitomir, Shariy’s supporters were beaten right in the office. In Kherson and other cities, the facades where the party’s offices are located were painted and painted, including with obscene inscriptions.

The most brutal attack on Shariy’s supporters took place on the evening of June 24 in his base Kharkov. The party activist who led the column at the Kiev action was beaten on the head with bats, almost killing him.

Anatoly Shariy called for strengthening the security of the party activists. The regional headquarters formed a plan to defend against attacks. The offices are equipped with signal buttons to call security, activists are armed with traumatic weapons to protect themselves from attacks. Shariy also assures that the Office of the President, the SBU and the Ministry of Internal Affairs were involved in the attack on the activists of his party.

Vesti.ua sources claim that some of the Sharia Party supporters, frightened of attacks by nationalists, decided to stop active activities. Only ideological supporters remained with the blogger.

“ The opposition platform for life (OPFL)”could not stay away from the street performance of its competitors from the“ Party of Sharia ”.

Ilya Kiva, a people’s deputy from the OPFL, created a public organization “Patriots for Life”. In its statutory documents, in addition to Ilya Kiva, his colleague Viktor Cherny is listed — an honorary member of the Combat SAMBO Federation of Ukraine, the head of a security company.

Political strategist Dmitry Raimov told Vesti.ua that Ilya Kiva and his power unit will try to protect the agitators of the OPFL. There is a possibility that radicals will attack their tents during the election campaign.

“The history of any power wing of the party is always a war for the street. So that your rallies are not dispersed by competitors, so that your agitators are not persecuted. The NSDAP and the communists had military organizations. They destroyed rallies of opponents and defended their own, ”the expert says.

According to one of the participants in the movement, athletes from martial arts clubs are being recruited into it. The piquancy of the situation is that these same athletes often participate together with the activists of right-wing organizations in business projects. For example, against developers or raider takeovers.

There is also information that employees of the security firms “Vityaz” and “B24” were included in the organization “OPFL”, although these data are not confirmed in these structures.

Kiva created his movement to «restore order and protect state interests.» The first battle «Patriots for Life» took in the Rivne region, when nationalists tried to put pressure on the majoritarian from Servant of the People Sergei Litvinenko.

If you believe the police reports, then mainly Kiev athletes arrived in the village of Bereznoye. There, naturally, not peaceful protesters were waiting for them, but the same sports guys from the National Corps. The battle turned out to be spectacular, but very painful for the Patriots.

Representatives of the “National Corps” claim that the police practically did not interfere with Ilya Kiva’s people during the clash. Police reports say the opposite: the cops detained more than twenty Kiev «supporters of the People’s Deputy Litvinenko.»

Our sources assure that the majority of the athletes after such a collision refused to take part in the actions of «OPFL» in the future.

In the thematic groups of nationalists, immediately after the incident in Rivne, they announced «Safari for OPFL.» In a couple of days, the radicals managed to attack the office of the OPFL in Kryvyi Rih, slightly damaging the facade of the building.

Political strategist Yekaterina Odarchenko is sure that the power wing of the OPFL is needed only for high-profile information campaigns. It is far from a fact that soon they will not give up on it.

“Kiva has the image of a right-wing security official. This image is not entirely acceptable to OPFL voters. Supporters of this party want to see the ideal economic leader. Boyko is the ideal leader for them, Rabinovich plus or minus. Kiva is a passionate speaker, like Lyashko, everyone watches and listens to him, but no one votes for him. Such a wing is needed for information campaigns, including information and protest campaigns, ”says Odarchenko.

Until recently, exclusively right-wing radical organizations ruled on Ukrainian streets, which are considered to be controlled by the SBU and the Ministry of Internal Affairs. They were sometimes adjoined by situational allies, but the main core was associated with the country’s leading security agencies. They attacked ideological opponents, not giving them a chance even for a peaceful action. During the time of Petro Poroshenko, not a single action of his opponents was complete without the participation of radicals.

After the change of power in 2019, organizations associated with the SBU went into the shadows. C14 moved to the “Municipal Warta” and now scares away children drinking beer, their satellites have completely stopped active actions. The most active remains the National Corps, which has long been associated with Arsen Avakov.

Now, in opposition to the right, activists of the Shariya Party, the power wing of the OPSL named after Arsen Avakov’s friend Ilya Kiva, and the Brothers organization have taken to the streets. The latter sometimes provide free military assistance in carrying out, among other things, peaceful actions. Ideologically, they are close to Shariy and the OPFL and they try to protect everyone who needs it from nationalists.

Former Deputy Interior Minister Mikhail Kornienko in a commentary to Vesti.ua said that the security forces should act as tough as possible in relation to radicals of all sorts. In the event of open conflicts on the streets, all violators of the law, without exception, must be sent to police wagons.

The police must take all measures using the rights granted by the constitution. They have the right to use special equipment, weapons and physical force. Depends, of course, on the situation. The law on the National Police allows in this case to use physical violence, to carry out physical actions, ”says Kornienko.

Roughly speaking, if the police do not begin to be selective in their duties, arresting only unwanted activists, nothing good will come of it. Ideally, the security forces should prevent conflicts in the bud, as in Rivne. Over the past week, it seems that the nationalists have firmly entrenched themselves on the “street”, having suppressed in the bud the opposition’s attempts to declare themselves with direct action. But the situation can change dramatically, especially if the struggle entails the death of representatives of one of the parties. This will be a serious test not only for the Interior Ministry, but also for the central government, which is still pretending that nothing is happening.