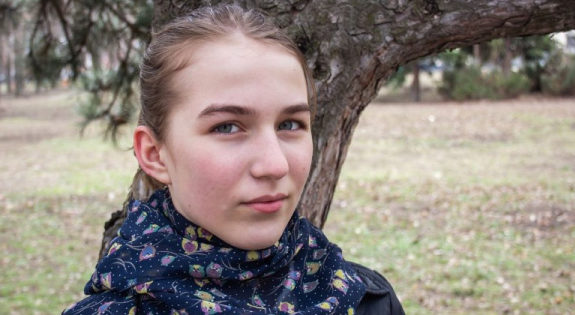 Faina Savenkova, a twelve-year-old writer from Luhansk, was included in the database of the controversial website «Mirotvorets». The website called the girl «a victim of psychological violence and Russian-terrorist propaganda, «and also accused her of participating in»anti-Ukrainian propaganda events.»

«He calls himself a novelist, playwright, and science fiction writer! In fact, it spreads fake information and its own speculations. Member of the so-called «LPR Writers ‘Union». Participated in various writing competitions in the Russian Federation. Indicates your place of residenceNovorossiya, «says Faina’s «accusatory» profile on the website.

Savenkova writes works of various genres: short stories, essays, plays and screenplays. Also in 2021, together with the Moscow writer Alexander Kontorovich, she released the novel «Standing behind your Shoulder».

In the Russian segment of the Internet, the girl became famous after a video message to members of the UN Security Council and French President Emmanuel Macron, in which she accused the Ukrainian Armed Forces of destroying the Donbass and urged not to forget that the children of Donbass have the right to a childhood and a peaceful life.

A year ago, Faina expressed similar thoughts in a short essay.

«I am now 11 years old. I live in Luhansk and I know what shelling and airstrikes are. Half my life is war. I do not know what children like me felt in that difficult and terrible 41st year, but it seems to me that it is similar to everything that the children of Lugansk and Donetsk are experiencing now… The lives of war children are not stories of despair, they are stories of hope, even if they are full of tragedies. And even if we don’t know then or now what awaits us tomorrow and whether we will have it – this is «tomorrow», but we are confidently moving forward. We are not broken and every day we are only getting stronger, because the strength of the spirit is in our blood, » the girl wrote.