A stumbling block: how and why nationalists fight against Catherine II 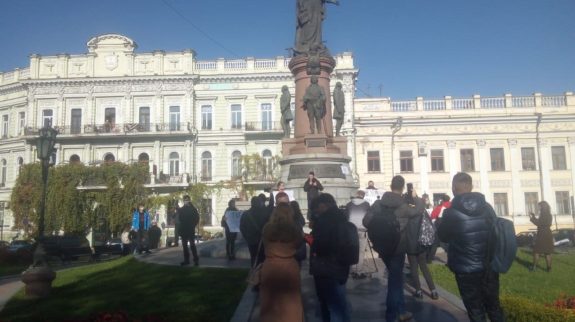 They are trying to demolish the monument since the time of Poroshenko — they write petitions, go to courts and hold rallies

A very old humanitarian topic, which goes back to the days of Viktor Yushchenko’s presidency, was brought up in Odessa the other day. It is about the desire of the public initiative «Decolonization of Ukraine» to demolish the monument to the founders of the city. This monument is called the monument to Catherine II, since the figure of the empress is central to the composition.

At Klymenko Time we figured out what arguments were put forward by the ideological opponents of Catherine, what are the prospects for their initiatives and how easily history is politicized in our country.

History of the monument

For a start — a little background of the monument. For the first time, a monument to the founders of Odessa was erected at the beginning of the last century with the money of caring Odessa citizens. Its opening took place on May 6, 1900. The central place of Catherine II in this composition was justified by the fact that it was she who, with her rescript from 1794, laid the foundation for the construction of the city and the Odessa port. The monument was located on the square, which was named Catherine Square.

With the advent of Soviet power, monuments to the former rulers were massively dismantled. This partly brings the processes of the fight against monuments together and the excesses of the decommunization of today. The sad fate and the monument to the founders of Odessa did not pass. In 1920, the monument was removed. In its place, a sculptural composition was erected in honor of the rebel sailors of the battleship Potemkin.

The monument to the founders of Odessa was restored only in October 2007 — as part of a large-scale reconstruction of Yekaterininskaya Square, which by that time had already returned its historical name. It is indicative that the reconstruction and reconstruction of the monument took place during the cadence of Eduard Hurwitz, who at that time was a member of Viktor Yushchenko’s political force «Our Ukraine» and who was actively supported by nationalists as mayor.

However, the position of Hurwitz, aimed at restoring the authentic appearance of Catherine Square, largely contributed to the return to the site of the sculpture of Catherine II. The monument to the founders of Odessa was recreated in its original form based on preserved photographs and historical documents.

In addition to the protests, there were attempts to demolish the monument through the courts. In 2012, the Primorsky District Court, and in 2015 the Odessa Court of Appeal, rejected claims for the demolition of the monument. The plaintiff was the Association of Cossack Societies «Sich», and its official claim was … to return the Soviet monument to the Potemkin sailors to the center of Yekaterininskaya Square.

A little unexpected step as for nationalists?

One way or another, after a three-year litigation they lost the lawsuit, and the topic of demolishing the monument was off the agenda for several years.

Several times nationalists tried to re-actualize this topic, but it did not cause any significant public outcry. In this sense, a petition from 2018 to the President of Ukraine on the demolition of the monument is very indicative. The appeal received only 102 signatures in support of the required 25,000, which in itself indicates a lack of public interest in the issue of dismantling the monument.

A new attempt to bring the issue of the monument to Catherine II for a wide public discussion is unlikely to be more successful. Considering that about 30 people came out to the rally of nationalists on November 8 this year on Ekaterininskaya Square.

According to the leaflet of the opponents of the monument, who lived more than two centuries ago, Catherine II is «incriminated» with the following list of claims:

• destroyed the Hetmanate and the Zaporozhye Sich;

The last point is most surprising, because it was the annexation of the Northern Black Sea region and Crimea by Catherine II following the wars with Turkey that served as a historical prologue for their entry into the Ukrainian state. Although after the attempt by the nationalists to return the Soviet monument to the sailors-socialists to Yekaterininskaya Square, this should not be surprising. Apparently, in the fight against Catherine II, they are ready for anything, even for the recognition of Turkish claims in the region.

As for the issue of serfdom, it is incorrect to blame Catherine alone for this. Serfdom in our lands existed long before the decree of 1783, arose in the Polish period and was a practice widespread in the countries of Eastern Europe of that historical period. In some of them, for example, Austria, this practice was canceled earlier, in others — later.

Moreover, the unfortunate decree, which strengthened the dependence of the peasants, was then happily accepted by the Ukrainian elders — in fact, he helped them become the new «nobility» of the empire. The Ukrainian peasantry fell directly into serf dependence on the Ukrainian noble stratum, and not on the Empress who lived in distant Petersburg.

It is also easy to answer the claims related to the «liquidation» of the Cossacks. The fact is that historically the Cossacks played the role of a shield and barrier on the border with the steppe, repulsing numerous Tatar raids and Turkish campaigns on Ukrainian lands.

However, after the annexation of most of the territory of the Northern Black Sea region in the Russian Empire following the results of the Russian-Turkish war of 1768-1774, this important function of the defenders of the borderlands was actually lost. For the first time in its history, Zaporizhzhya Sich found itself not on the border with a dangerous steppe, but deep in the rear. The result of this transformation was the transformation of the Sichey foreman into large landowners and local oligarchs, as well as the actual loss of the “rear” Cossacks of their military and strategic importance.

It is worth paying attention to one important point that is often overlooked. The Zaporozhye army was not completely eliminated, but rather transformed. Created as a result of the abolition of the administrative autonomy of the Siche territory, the Army of the Loyal Cossacks existed until 1792 and managed to lay the foundation for two new Cossack organizations: the Kuban Cossack army and the Black Sea Cossack army — both counting direct succession from the Zaporizhzhya Sich.

Given their territorial localization, one can speak not about the elimination of the Cossacks as a military unit, but about moving closer to the borders of the state and to the front of hostilities, where the Cossacks have always been in demand. The Black Sea Cossack army, stationed between the Bug and Dniester, subsequently turned out to be closely connected with the history of the Odessa region, which is sufficiently reflected in the toponymy of Odessa.

One way or another, we see that the claims of the opponents of the monument to Catherine II are not only not consistent historically and did not find support in the Ukrainian courts, but also very little concern the citizens themselves, which is also confirmed by the survey of Odessa residents conducted by the Klymenko Time team.

If the monument to the founders of Odessa could not be dismantled during the time of Poroshenko, then it is all the more unlikely that they will do it in the current situation. The potential reputational costs are too great for anyone who sets out to seriously fight the history of a seaside town.