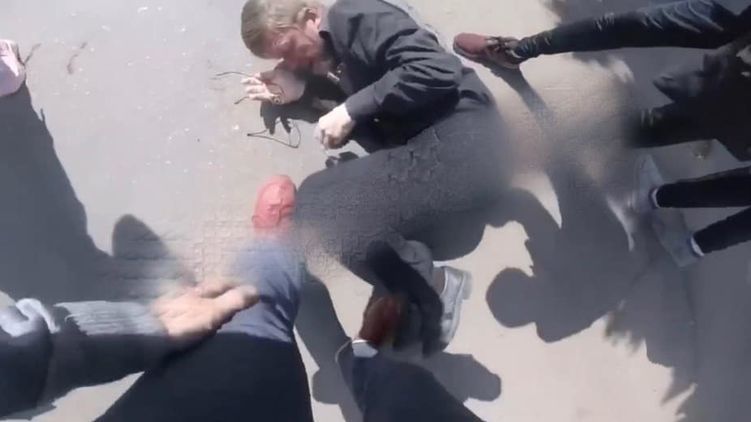 In Vinnitsa, representatives of the National Corps kicked a party supporter Shariy and broke his ribs. This was announced by the leader of the political force, media expert Anatoly Shariy in his Telegram channel.

“The terrorist organization National Corps attacked our supporter in Vinnitsa. An absolutely harmless man. They knocked down, kicked, broken ribs, threatened one lung. It is easy to beat up peaceful people in a crowd when you are covered by the Ministry of Internal Affairs, SBU and the Office of the President. The guarantor approves, ”the head of the party wrote.

Also in Kharkiv, representatives of the National Corps attacked two supporters of the Sharia Party, the leader of the political force said on Twitter.

During the attack in the direction of the activists, they sprayed a can of gas and poured green paint on them. In this case, one of the victims at the scene was assisted by ambulance doctors.

“The National Corps attacked our activist in Kharkiv. The President continues to hide behind his assassins and terrorists. The Ministry of Justice does not prohibit the activities of the terrorist organization covered by the OP, ”Shariy wrote.

He also posted photos and videos from the scene of the incident.

Earlier, Shariy said that in Kharkiv they tried to kill an employee of the Shariy Party, Nikita Rozhenko, who was leading a column of protesters on June 17 in Kiev during the action «The dumb president is not my president!» The attack took place on the night of June 25, when a party employee was beaten on the head with bats. The victim ended up in intensive care.

Rozhenko was hospitalized in the 4th Kharkiv City Clinical Hospital of Emergency and Emergency Medicine with craniocerebral trauma and concussion.

A police spokesman said that a report to the 102 service about the attack and beatings came from an eyewitness who was nearby. According to the law enforcement officer, the attack was carried out by three or four people.

A little later, law enforcement officers explained why the attempt was assessed as hooliganism.

On June 27, the police reclassified the article on the attack on the representative of the Sharia Party in Kharkov, Nikita Rozhenko, from hooliganism to attempted murder.

We will remind, in Cherkassy, representatives of the National Corps beat up the servicemen of the Armed Forces of Ukraine, mistaking them for supporters of the Shariy’s Party.

Before that, representatives of the Sharia Party were attacked in Cherkassy and Zhitomir. At the same time, in Zhitomir, one of the attackers was identified as Roman Borovik from «Azov», and in Cherkassy, ​​unidentified persons beat a party representative with a hammer on the back right outside the house.

Earlier, Shariy posted a video of the start of a metro fight between opponents and supporters of his party. The video shows how a group of Sharia’s opponents attacked people from behind and beat them, and the crowd was already kicking and punching the already lying ones.

It was also reported that the radical tried to attack the supporters of the Sharia Party, but was rebuffed. One of the attackers said that he was a veteran of the ATO, and threatened those present with revenge and future reprisals.

Prior to this, representatives of the National Corps broke the windshield during the attack on the bus with Shariy’s supporters.