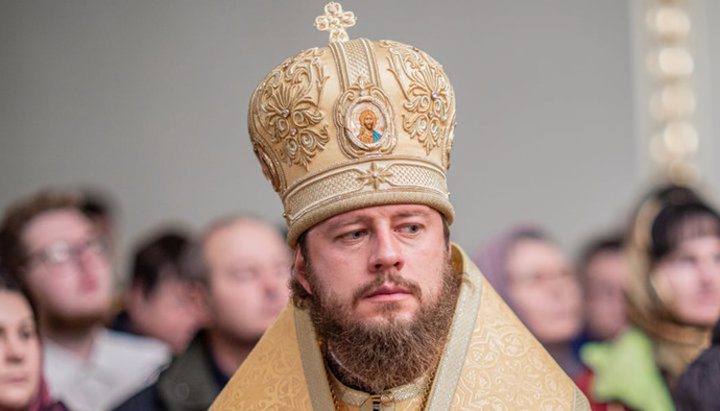 The topic of violations of the rights of believers in the UOC has become the subject of wide discussion at the OSCE forum, said the head of the UOC Representation to European international organizations.

In recent years, 122 churches were taken away from the Ukrainian Orthodox Church by force and with many offenses and 220 parishes were illegally re-registered in the OCU. Bishop Victor (Kotsaba) of Baryshevsky, Bishop of Baryshevsky Viktor (Kotsaba), spoke about this in an interview with the Greek resource news-politics.com regarding his participation in the OSCE annual Supplementary Human Dimension Meeting (SHDM) on Freedom of Religion or Belief, dedicated to religious freedom and human rights protection.

“This year, on behalf of the Ukrainian Orthodox Church, I appealed to the international community for assistance in stopping the ongoing violation of the rights of believers in Ukraine,” said the hierarch of the UOC. “The seizures of churches, beatings of our believers, burning of churches, the adoption of discriminatory laws, unfortunately, continue, and we are extremely concerned that these offenses are not properly suppressed by the Ukrainian authorities.”

He noted that similar offenses against the UOC began back in 2015, when supporters of the UOC-KP seized about 40 churches, “while attempts at seizures were numbered in the hundreds,” and after the creation of the OCU at the end of 2018, force seizures were continued by activists of this organization. created by combining two non-canonical structures.

“As a result of this, in recent years and up to the present, the Ukrainian Orthodox Church has lost 122 churches, which were also forcibly transferred to the OCU, with many violations of the law,” Bishop Viktor said. “In addition, 220 parishes of the UOC were illegally re-registered by state bodies in favor of the OCU”.

The hierarch emphasized that the reason for the acts of hatred towards the UOC is the preservation of the spiritual, which has nothing to do with politics, canonical connection with the ROC, and “unfortunately, the UOC believers are gradually making an“ enemy image ”:“ This is done by individual media outlets, representatives authorities and politicians who want to speculate on the topic of war, using the UOC in this dirty business, because it is much easier to take away the church from ordinary believers than to prove their patriotism on the battlefield. «

Bishop Victor noted that at the OSCE forum this year, the topic of violations of the rights of believers in the UOC has become the subject of a fairly wide discussion.

“Thus, according to a number of human rights organizations, violations of the rights of believers in Ukraine have the same reasons as in Montenegro and North Macedonia. In all these countries, the politicians in power seek to use the religious issue to achieve political results, want to forcibly break the historical and canonical ties of the believers of Montenegro and North Macedonia with the Serbian Orthodox Church, and in Ukraine with the Russian Orthodox Church.

As a result, this leads to massive violations of the rights of ordinary believers. Therefore, we have to convince the international community that it is necessary to publicly criticize the actions of those politicians and government officials who try to include a sensitive religious issue in their election campaigns and use believers for their political projects, ”explained the head of the UOC Representation to European international organizations.

As the UOJ reported, at the OSCE forum, which took place on November 9, 2020, Bishop Viktor (Kotsaba) of Baryshevsky called on the international community to more actively respond to systemic violations of the rights of believers in the UOC.