Harassment of the Russian language in Ukraine is getting worse: nationalists are looking for a new victim every day 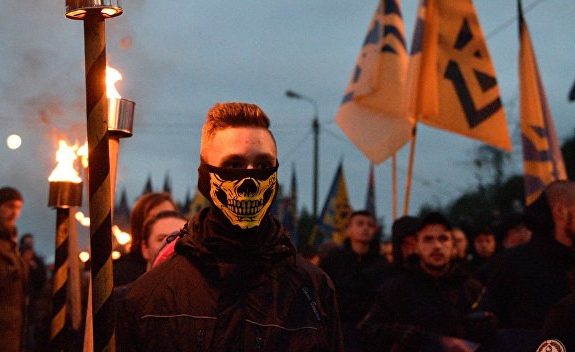 In recent weeks, there are more and more cases when pseudo-patriots arrange real harassment

Ukrainians continue to push their heads together, because the internal conflict over the Russian language is only heating up every day. Taras Kremin asks to engage in «snitching», which is what residents of Ukraine do. In the past week alone, the Language Ombudsman Institute has received 195 complaints about Russian-language services. Recall that since January 16, the norms on the Ukrainization of the service sector have come into force in our country.

Nationalists disperse” zrada”(betrayal) every day and try to put strong pressure on those who do not speak Ukrainian. In recent weeks, there are more and more cases when pseudo-patriots arrange real harassment. Earlier, Klymenko Time wrote about some of them. However, nationalists are looking for new victims every day.

At the beginning of 2021, the Kherson Educational School «School of Humanitarian Labor» received a letter from Kremin. According to him, the school allegedly violated the law on ensuring the functioning of the Ukrainian language and now the school must be checked.

It should be noted that this is a boarding school, where 486 children study. The school is intended for training, education and accommodation of children with chronic non-specific diseases of the digestive system.

It seems to us that the language Ombudsman would do well to learn Ukrainian himself, since the official letter contains many spelling mistakes.

Later, Kremin said that a complaint was written against the school’s director Artem Kiyanovsky, because he gave an interview about the school in Russian. They even attached a screen from the corresponding YouTube video to the document.

Kiyanovsky told the media that it looks like an attempt to close the last school in the region that teaches in Russian. According to him, the pedagogical collective in the educational institution does much more than Kremin himself.

— We have never had any complaints about the school or teachers. We fully comply with the requirements for the percentage of lessons in Russian, 20-40-60%. We teach Ukrainian language programs for schools with advanced study of the Ukrainian language. We have barely achieved the allocation of such textbooks, — he told the media.

Scandal with the veterinary clinic

On January 24, a message from Galina Lekunova, who is a tenant of the premises for the Zapadny veterinary care center in Mariupol, appeared on Facebook. She complained that the facade of the building was painted and the sign was broken. Lekunova believes that this was done by «patriotic citizens».

— Well, what could you expect from «patriotic citizens»? The clinic’s facade was vandalized. The clinic has a terrible smell of nitrous paint, all the animals in the hospital are under terrible stress, obviously knocked on the windows. Mobile wrestlers with kittens and puppies, real heroes! – the message says.

Judging by the video that she posted, the inscriptions were left very creepy: «Last warning», «Death to enemies», «We are watching you», «Wash the blood off your hands» , etc.

The threats began after the veterinarian jokingly announced that Russian speakers will get a 50% discount on all types of services, according to «News of Donbass».

Apparently, the action opened a portal to hell, from where all the pseudo-patriots were sent. Note that across Ukraine, such discounts are often made for Ukrainian-speaking citizens.

According to Lekunova, she and her family faced curses, threats and death wishes. The Mariupol police opened criminal proceedings under the article hooliganism, however, most likely, no one will be found.

Ukrainian poet and Dragomanov University lecturer Yevhen Bilchenko also came under a wave of hate because of the post in Russian. She is a professor at the Department of Cultural Studies and Philosophical Anthropology.

A week ago, she criticized the norms on Ukrainization, saying that this is the least of the problems. Bilchenko stressed that because of the principle, she will now speak Russian in stores.

— On the contrary, I am now consciously switching to Russian in the service sector: I have been speaking mov automatically for years, I don’t think about what I am thinking right now, but it is painful to see how my poor invincible people are being transformed into a new senility in fear, — she wrote on Facebook.

Of course, the» patriot » of all Ukraine, the murderer Serhiy Sternenko, immediately appeared. Under each post of the university where the professor teaches, he wrote the same phrase: «Why does Bilchenko work for you, who promotes the Russian world and calls the Russian-Ukrainian war a civil war?»

Moreover, the nationalists launched a whole campaign to get the poetess fired from the Kiev university. Like-minded people of Sternenko leave comments under the university posts: «Whose Crimea is it?».

They even got to the rector Viktor Andrushchenko, the nationalists demanded that he dismiss Bilchenko or go to Rostov. Single messages turned into real bullying. In Facebook, they began to mock the appearance of the professor.

As a result, Bilchenko recorded a video message, where she recalled that President Vladimir Zelensky had previously promised not to divide Ukrainians into right and wrong. She stated that she was warned about her dismissal and loss of her professorship. However, on January 24, the poetess shared that the rector would not dismiss her.

— Disrespectful gentlemen extremists, neo-Nazis and other hooligan commentators! I just had a conversation with the rector of NPU Viktor Petrovich Andrushchenko. Obviously, he is under pressure. But! I received an assurance from him that he was responsible for what he said and that he was not going to fire me PERSONALLY,- the message says.

It remains only to wait for the right-wing radicals to «break through the bottom» once again and hunt down another Ukrainian for his «wrong» views.

Right-wing radicals have also reached a student from Africa, Olani, who now lives in Ukraine. Earlier, he criticized the language law, as he believes that everyone should have freedom of choice.

The video message of a student from medical university was published in the telegram channel “ОпустиВату» «, whose administrators constantly expose the personal data of those whose position does not agree with the opinion of pseudo-patriots.

— I speak Russian and live here in Ukraine, in the eastern part of the country. People here speak Russian, and I study in Russian. Am I supposed to go to jail for this right now? — said the foreigner.

In his opinion, people who believe that everyone in Ukraine should speak the same language are «beggars»and» narrow-minded».

Now the right-wing radicals have declared a «hunt» for the foreigner. Channel administrators now collect any information about the student.

Olani told to Vesti.ua that he never said anything bad about Ukraine and its inhabitants. He considers the Ukrainian language very beautiful and wants to learn it.