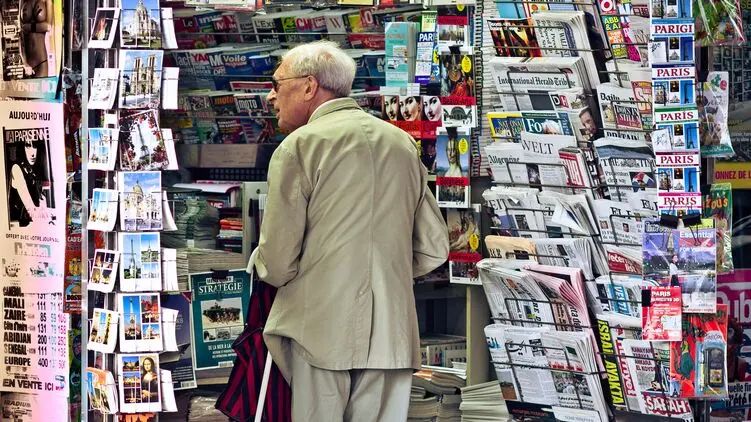 Hard times are coming to the print media market in Ukraine. According to the law on total Ukrainization, from January 16 next year, all print media in Ukraine must be published in the Ukrainian language. More precisely-to print at least half of its circulation in Ukrainian. But for the vast majority of publications that can’t afford to publish versions in two languages at once, this means a requirement to switch to Ukrainian.

An exception is made only for regional media, which will be required to switch to the Ukrainian language from July 2024.

Publications in indigenous languages, official EU languages, and English are also not subject to these restrictions.

But it is obvious that the Russian language, in which a large number of Ukrainian newspapers and magazines are published, does not belong to any of these categories.

Strana found out which edition will produce two versions of the newspaper at once, why crosswords will disappear, and how the reader will react to the innovations.

Publications that ignore the law and continue to publish in Russian will be fined.

«For violators, a fine is provided from 400 to 500 non-taxable minimum incomes of citizens (6,8-8,5 thousand hryvnias). Repeated violation during the year provides for a fine of 500 to 700 tax-free minimums (8,5-11,9 thousand hryvnias),» the State Committee for Television and Radio Broadcasting reminded.

However, the language Ombudsman will be able to bring violators to administrative responsibility only from July 16, 2022.

Deputy Director of Soyuzpechat Agency AlexeyBabansky told Strana that some publishers are already trying to circumvent the law and re-register media outlets under a regional certificate in order to remove the issue of switching to Ukrainian until 2024.

«And someone, in principle, without waiting for January, already publishes issues in Ukrainian,» he said.

As explained to» Country » in the points of sale of the press, customers have been asking for a month whether there will be Russian-language publications on the shelves, but there is nothing to please them with.

«There are no problems with the assortment now, but the era of newspapers is coming to an end. People often ask if there will be Russian-language newspapers in January, especially people who have been buying a signet from me for 10 years. But there is nothing to console them with. They definitely won’t read in Ukrainian, because they don’t think in that language. Accordingly, sales will drop significantly, «the seller told Strana.

He added that now 60% of publications in Russian are presented on the counter.

«And from January everything, almost 90% will be in Ukrainian. But maybe we’ll figure something out, » he said.

Mediaexpert Serhiy Cherniavsky told Strana that there are fewer than 580 national newspapers left in Ukraine.

«At the same time, their number has decreased by almost 20% in two years,» he said.

One of the provisions of the law on total Ukrainization obliges print media outlets to distribute at least 50% of the titles of publications in the state language.

Soyuzpechat is already preparing for changes.

According to the deputy director of the Soyuzpechat agency, AlexeyBabansky, if the publisher has printed 100 copies of the magazine in Russian, then it is obliged to print another 100 copies in the state language.

«And the distributor can deliver 100 copies only in Russian. If, according to clause 4 of the law, my journals are included in these 50% by the name of other languages — then both he and I fulfill the requirement. And the rest of the print run in Ukrainian is sent by the publisher, relatively speaking, to Lviv, »  Babansky said.

That is, formally, the law allows you to simultaneously publish in Russian (and any other language). Of course, most newspapers can’t afford such a format, since they will have to print an equal number of copies in both Russian and Ukrainian (despite the fact that Russian-language publications will be read in the latter, of course, much less and they will simply have to be handed over to waste paper).

Therefore, publishers are not ready to print two versions at once.

«We will act within the framework of the current legislation, which comes into force on January 16. Two versions of the newspaper in both Ukrainian and Russian are very expensive to publish, because the main costs are paper, printing and sales. That is, expenses will double if you make two versions at the same time, » Bogdanova said.

According to a media expert According to Sergey Chernyavsky, many print publications will not survive the transition to the Ukrainian-language version, not to mention the issue of circulation in two languages at the same time.

«For example, if for an investor of a large TV channel, an overpayment of 10 million for translation and dubbing will not make the weather worse, because if the leaders among TV channels are all unprofitable, then for a print publication that builds media as a profitable business, this is a blow,» Chernyavsky said.

He suggested that the people who pass these laws probably don’t read the newspapers.

«The average age of Rada deputies is not included in the target audience of print media. Newspapers are mostly read by people aged 50+, » he added.

According to the general Director of the publishing house «Mega-press Group» Roman Greba, newspapers «Programka», «Program TV», «Telekurrier» i «TV Guide» from the first issue of January will be published in Ukrainian.

«Already this year, in some publications, we have started posting some texts in Ukrainian in order to understand how the reader will react to this. After the release of issues in «mixed» languages , readers did not cut off the phones in the editorial office with indignation,» he said.

However, there are other reviews of this practice. Serey Chernyavsky says that he already had experience with readers who threatened to cancel their subscription to the newspaper because of materials in Ukrainian in the Russian-language version.

«Until mid-2016, I headed the newspaper of the Dnipropetrovsk Regional Council, which was published in Ukrainian and Russian. When we put some material in Ukrainian in the Russian-language version to save on printing, readers called the editorial office and said that they would refuse to subscribe, as they were used to reading in Russian,» Chernyavsky told Strana.

For some publications, it was decided to publish parallel issues. For example, the publication Gordon Boulevard has two language versions.

«The newspaper has been published in two languages since October. But the print runs in Ukrainian are still incommensurable with the Russian version. Nevertheless, a loyal audience prefers the language in which they are used to reading, » Roman Greba said.

He added that the cost of publishing a newspaper in another language is quite expensive.

«The cost price becomes higher, as the amount of money spent on editorial training increases: payment for proofreaders, literary editors, typesetters, and most importantly — translators, and work is also added to the sales service,» Roman Greba said, without specifying the specific amount of additional expenses.

Experts note that the transition of newspapers to the Ukrainian language by their main audience (older people) in large cities and in the south-east will be perceived negatively.

«The target audience of newspapers is people aged 50+ who are used to reading in Russian, so this will be a big problem for publications,» said Sergey Chernyavsky.

According to the editor-in-chief of ”CP in Ukraine” According to Oksana Bogdanova, the editors will carefully observe how the reader reacts to the innovations.

«Our publication has a core of readers who are used to reading this publication in its current form (that is, in Russian —Ed.). The reader always reacts painfully when we remove some permanent headings or change the TV program. Will the Ukrainian-language version bring new readers? I hope that those who made the decision to translate print media into Ukrainian will en masse subscribe to 10-15 publications for at least a year, » Bogdanova said.

One of the publishers told Strana that the translation into Ukrainian can finish off the publishing business.

«National newspapers are already in an extremely difficult situation. Circulation drops every year. Print versions of publications are being closed. The process of Ukrainization will speed up this process, because the audience of newspapers is very conservative. These are older people. In some places, the local press is still kept. But after the translation into Ukrainian in the south-east, most likely, a significant part of newspapers will cease to exist, » the publisher says.

Meanwhile, as Strana found out in the department «Ukrposhta» it is no longer possible to subscribe to newspapers in Russian, only in Ukrainian.

«Many people ask and ask in Russian, but the law does not allow this,» one of the branches said.

Crossword puzzles will be smuggled in

The transition of newspapers to the Ukrainian version may also lead to an increase in printed products from Russia on Ukrainian shelves. First of all, in the mass segment. For example, crosswords.

«Crossword players are people who solve crosswords in the language they think they need. If you suddenly translate all the crosswords into Ukrainian, then this is equivalent to giving such a reader a crossword puzzle in French. The reader will not accept it, because he does not think in Ukrainian. Such a reader will either refuse to buy crosswords, or will look for contraband publications from Belarus or Russia on the market, and such publications may well appear, » says Roman Greba, General Director of Mega-Press Group.

Alena Lazutkina, a book publisher, is confident that the demand for printed materials from Russia will continue to grow.

Experts note that in May 2021, at a press conference in UNIAN, publishers of the crossword puzzle group asked for a postponement of the introduction of this norm for national publishers or tax cuts and submitted proposals to the Committee on Humanitarian and Information policy.

«However, the committee ignored the industry’s proposals. At the same time, when the state budget finances the Dom channel, which broadcasts in Russian, this is considered normal. However, no one cares about older readers who are used to reading articles and solving crosswords in Russian in cities in eastern Ukraine, » Chernyavsky said.

Mediaexpert Larisa Drozdova believes that as a result, the transition to Ukrainian for print media will be extremely difficult for both readers and publications.

«Some of the publications simply won’t be able to pull financially and will be closed. I am in favor of people learning the Ukrainian language, but I am against being broken through the knee in this way, » Drozdova said.

Sergei Chernyavsky noted that small and medium-sized businesses suffer because of the solution of political issues.

«The implementation of printed media is small and medium-sized businesses. In the case of the transition of printed publications to Ukrainian, business suffers. In the future, this will lead to a reduction in tax payments, loss of jobs, but we have a political solution to the issue that is above the interests of the entire print industry,» Chernyavsky concluded.