In Zaporozhye, the police terrorized the car run 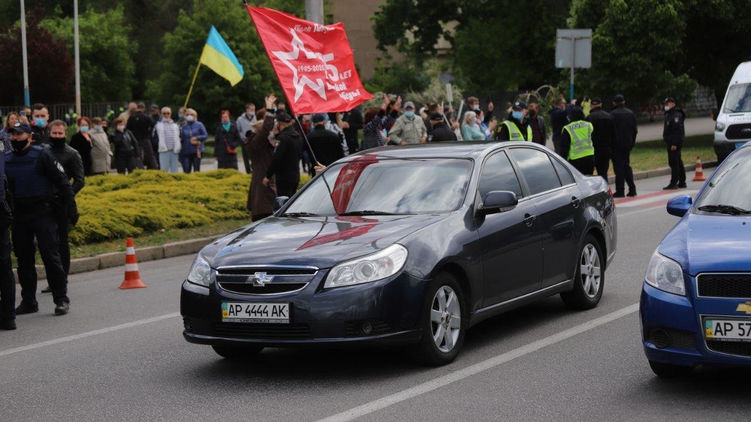 In Zaporozhye, local police searched the Victory Regiment organization all night long, which has been organizing rallies for the fourth year by May 9. An attempt was also made to stop the action itself.

Participants and journalists stated this on Facebook, the correspondent of PolitNavigator reports.

In particular, the Kiev blogger Myroslava Berdnik reported that since May 8, searches have been carried out in the cars parked at the office of the Victory Regiment. According to her, more than 20 police officers cordoned off the office.

“They confiscated Chinese masks with asterisks that the organization had purchased to distribute to people during tomorrow’s rally. They seized flags, some newspapers and everything related to the holiday. Allegedly for an examination, but the subject of this examination is not clear — there are no prohibited symbols on the seized items. The only reasonable explanation for these actions is an attempt to disrupt tomorrow’s rally in honor of Victory Day, ”Berdnik said.

She also wrote, referring to the head of the «Pobeda Regiment» Andrei Ivanov, that the organization has been holding events with these symbols for several years and no one has made any claims.

“According to him, this did not happen even under Poroshenko. Peaceful action before the Victory Day — a public holiday! With allowed symbols! It just looks like intimidation! ”Berdnik summed up.

Today, May 9, the police again attacked the rally. “And we have done everything to disrupt the rally of the Victory Regiment. All night — searches of the organizers. Andrei Ivanov was released only after the start of the rally, «Zaporozhye journalist Pavel Volkov also wrote.

He added that in the course of the movement, the police pulled out one car after another from the convoy, and then the convoy was stopped altogether without any comments.

“They held them, fumbled, and then released them, forcing them to remove the flags, although they did not have any prohibited symbols. Thus, the police simply destroyed the convoy agreed with the city authorities, ”Volkov said.

In addition, according to the journalist, the radicals from the National Corps, who arrived at the beginning of the event, «hung out side by side and left.»