In Zolochiv, masked militants smashed the fence of the priest’s house of the UOC 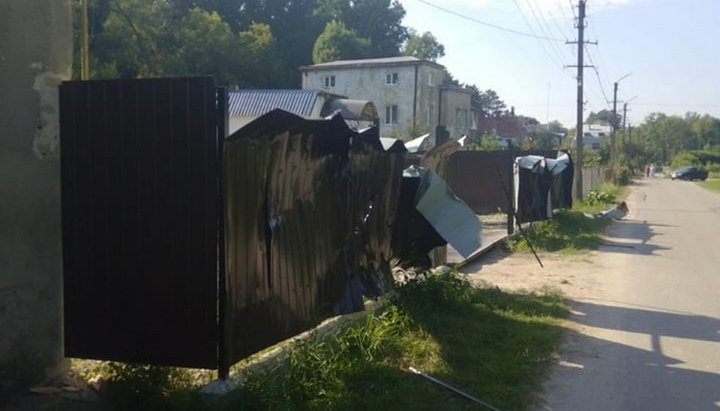 On August 6, 2020, in the private house of the UOC cleric Priest Maksim Yoenko, who was accused by the representatives of the UGCC and local authorities of illegal construction of a church in the courtyard, local activists destroyed the fence. The priest told the UOJ correspondent about this.

According to him, at about half past nine in the morning 20 masked young men approached the fence and destroyed it with hammers.

The police, who arrived half an hour after the incident, interviewed witnesses.

Archpriest Nikolai Danilevich, deputy head of the Department for External Church Relations of the Ukrainian Orthodox Church, commented on the destruction of the home of the priest of the UOC in Zolochiv by the masked militants. Comment posted on Facebook.

He noted that in the south of Ukraine, the UGCC does not interfere with the construction of its churches, while in the Lviv region inter-confessional conflicts are constantly provoked against the UOC.

“Greek Catholics are quietly building churches in the south of Ukraine (the village of Zatoka, Belgorod-Dnestrovsky district, Odessa region), and none of the Orthodox or local authorities are throwing hysterics, as was recently the case in Zolochiv (Lviv region), where the Greek Catholic fathers raised the whole city against the UOC community. That is, Orthodox Christians cannot even exist in Zolochev, while Greek Catholics can build in Zatoka. These are our regional realities, ”wrote Fr. Nikolay.

As reported by the UOJ, the conflict around the private house of a priest of the UOC began due to the fact that the clerics of the UGCC protested against the construction of a temple of the canonical Church. After that, priest Maxim’s gates were painted with insults and Nazi symbols, a veche was held near his house against the UOC, he and his family were offered to leave the city, and later the authorities installed a video surveillance camera in the priest’s courtyard.