In Zolochiv, the priest’s house of the UOC was attacked again 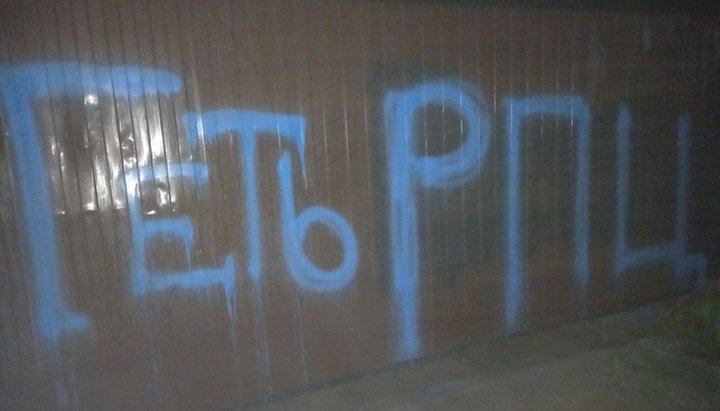 On the night of September 28, 2020, in Zolochiv, Lviv region, unknown persons carried out another attack on the house of the priest of the Ukrainian Orthodox Church, Priest Maxim Yoenko. Vandals put on the fence the inscriptions «Get out of the Russian Orthodox Church» and «Zolochev is not Brody», and also threw red paint and brilliant green on the walls.

In a comment to the UOJ, Priest Maxim said that the attack took place in the early morning.

“At 5:45 am we heard some kind of knocking — like a blow on metal,” he said. — We looked at the monitors of the camera — there was no one, but literally a minute later we saw a man who approached the gate and began to bend metal. Later we rewound the recording on the camera and saw that there were two guys, both in hoods, so we can’t see their faces. «

When the priest went out into the courtyard, the young man who attacked his fence demanded: «Get out of Zolochev, otherwise you will burn.»

In the yard, the priest saw fresh inscriptions on the fence and «bloody» spots painted on the walls with red paint. Also, he said, night guests threw brilliant green and a half-liter jar with an unknown substance in the direction of the trailer on its private territory, which did not break.

Father Maxim called the police, who arrived at the scene of the incident and drew up a protocol.

In addition, on the same night, unidentified persons re-attacked a children’s store in Zolochiv, which belongs to a parishioner of the UOC — the inscriptions “sponsor of the Russian Orthodox Church” and “boycott” were written on the walls of the building. As the believer told Priest Maxim, this time the second small warehouse-store belonging to him also suffered.

As the UOJ reported, the day before, priest Maksim Yoenko answered questions from human rights activists who will present a case on violation of the rights of believers of the UOC in Zolochiv at the 45th session of the UN HRC.

Recall that since July 2020, in Zolochiv, Lviv region, the persecution of believers and the priest of the UOC Priest Maksim Yoenko continues, in which representatives of local authorities take part. Accusing the cleric of the illegal construction of the UOC temple, the Zolochev mayor’s office installed CCTV cameras and through the courts is seeking the forced dismantling of the fence on its private territory.