Is there a problem of anti-Semitism in the country? 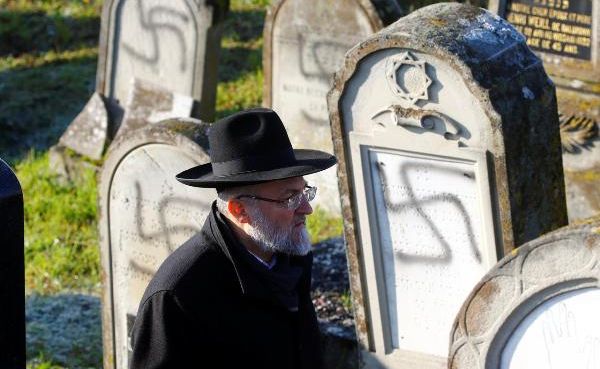 Anti-Semitism in one form or another is present almost everywhere. But in Ukraine, the phenomenon is of a special nature: its manifestations are generally not characterized by aggression, but it is periodically recorded in the political and even diplomatic environment.

Klymenko Time analyzed what is happening in Ukraine on this topic.

Showman, member of the Golos (Voice) party and ex-candidate for mayor of Kiev Sergei Prytula got into an anti-Semitic scandal. During a live broadcast on radio Novoye Vremya (New Time), a listener called his program and voiced anti-Semitic insults. In response to which Prytula smiled, said that he «shares the emotional indignation» of the caller and «very glad to hear him on the air in a good mood.»

Which, given Prytula’s reaction, may indicate his support for things voiced by the listener.

In response to the incident, the Jewish community of Ukraine filed a statement with the police.

And the Commission on Journalistic Ethics condemned Pritula, noting: “The specificity of the live broadcast provides for the periodic occurrence of situations in which citizens who speak provocatively or discriminatory gain access to the microphone. In this case, each edition has its own prescribed algorithms of actions, which recommend the presenters a line of correct behavior. «

The commission emphasizes: “The host entered into a friendly dialogue with the guest and thus could create the impression for the listeners that in a specific program and in general on the air of radio NT, a tolerant attitude towards offensive statements is“ normal ”. According to the Commission, Pritula should have interrupted the guest, pointing out the inadmissibility of insults on ethnic grounds, and after drawing the attention of the audience to the fact that there was a gross violation of human rights and the editorial office does not share such views. Which he didn’t.

As of November 13, neither Pritula nor Radio NT did not comment on the incident.

In 2018, the level of anti-Semitism in Ukraine was the lowest in Eastern Europe.

According to the report of the United Jewish Community for 2019, when a “green” team was already working in the government, one can distinguish:

— Prime Minister Alexei Goncharuk’s visit to the concert of the ultra-right group «Sokira Peruna (Ax of Perun)», whose lyrics are anti-Semitic and xenophobic;

-Adoption of the Verkhovna Rada resolution on the celebration of memorable dates and anniversaries in 2020 with the honor of individuals who are accomplices of the Nazi regime in World War II.

At the same time, the number of cases of anti-Semitism in 2019 decreased compared to 2018.

Most of the cases recorded in 2019 relate specifically to anti-Semitic vandalism: vandals attacked synagogues, painted swastikas on them and «mined» them, put anti-Semitic inscriptions, smashed Jewish memorial plates and desecrated monuments.

At the same time, as in 2018, not a single case of the use of physical force on anti-Semitic grounds was recorded.

The official position of the Ukrainian authorities

In 2018, in response to the case of manifestation of anti-Semitism on the part of the representative of the «Right Sector» Tatiana Soykina, Minister of Internal Affairs Arsen Avakov said that public anti-Semitic calls in Ukraine are unacceptable and are «cave medieval».

On October 10, 2019, President Volodymyr Zelenskyy announced during a press marathon that there is no anti-Semitism in Ukraine.

On June 27, 2020, while visiting the Chabad synagogue in Kherson, Zelensky said: “… the most important thing is that all people see that there are Ukrainian citizens in Ukraine. And, despite their nationality, religion, all of them are protected by the state of Ukraine. (…) This is a hybrid war when they say that we have xenophobia, anti-Semitism. (…) In Ukraine, the level of anti-Semitism is very low. If there are attempts, we prevent them. «

Zelensky repeated a similar thesis in an interview with The Jerusalem Post in September 2020, commenting on the restrictions on Hasidim visiting Uman this year. “Anti-Semitism is a poison that has no place in Ukraine. And in this case, we faced many disinformation campaigns, ”the president said.

In 2013, the Jewish World Congress added the Freedom Party to the list of neo-Nazi organizations.

At Euromaidan, anti-Semitic statements were also sounded from individual speakers, but this was not of a systemic nature. For example, the nationalist poet Diana Kamlyuk ended her speech on the Maidan stage with the phrase “So that you put the squeeze on and not be led to the prayers of the Jews! The Ukrainian blood of a white man flows in our veins! » No one on the stage condemned such her words. On the night of January 1, 2014, Svoboda member Bogdan Benyuk played a Christmas nativity scene that actualized anti-Semitic stereotypes. There have also been cases of anti-Semitic vandalism.

In general, anti-Semitic propaganda was recorded on a small scale on both sides of the confrontation.

At the same time, the «Jewish hundred» under the leadership of Nathan Khazin, who jokingly called himself and his supporters «Jewish Bandera», which is an oxymoron, was also present on the Maidan. After 2014, right-wing radical movements began to gain popularity in Ukraine, often sharing anti-Semitic views. The situation got complicated to the point that in 2018, American congressmen wrote a letter about anti-Semitism in Poland and Ukraine, giving more attention to what was happening in Ukraine.

The letter drew attention to the Azov battalion, which is part of the National Guard of Ukraine. During marches in honor of the Ukrainian Insurgent Army, its participants allegedly demonstrated a Nazi greeting. Director of the Institute of National Remembrance Vladimir Vyatrovich called this statement «a mixture of incompetence and deliberate distortion of information, a mixture of truth and lies.»

The Association of Jewish Organizations and Communities of Ukraine (VAAD) in the report for 2019 recorded a number of anti-Semitic materials and statements of politicians in Ukraine, including: Oleg Tyagnibok, Andriy Biletsky, Dmitry Yarosh, Andriy Tarasenko, Ruslan Koshulinsky, Bogdan Benyuk, Yuriy Sirotyuk , Andrey Omkhnik, Irina Farion, Yuri Mikhalchishin, Igor Miroshnichenko and others. That is, exclusively supporters of nationalism and right-wing radicals.

Of the oppositionists, only Nadezhda Savchenko was recorded as having an anti-Semitic statement. At the same time, there is no information that any of the named persons was liable under the law.

Based on what is happening, we can conclude that anti-Semitism exists in Ukraine, but it is not a large-scale or systemic phenomenon, and is more typical of nationalist and right-wing radical forces in Ukraine. It is also common at the household level.

What are Jewish organizations and diplomats saying?

The VAAD of Ukraine stated that Ukraine has never supported Holocaust denial, as well as the absence of anti-Semitic violence in the country.

At the same time, the organization periodically publishes condemning statements related to acts of anti-Semitic vandalism, as well as annual reports recording cases of anti-Semitism in Ukraine.

At the same time, Jewish organizations regularly condemned torchlight processions in Ukraine. The march in honor of Stepan Bandera’s birthday on January 1, 2020 was also condemned by the head of the Israeli diplomatic mission in Ukraine, Joel Lyon.

“We, the ambassadors of Poland and Israel, believe that honoring people who actively promoted ethnic cleansing is an insult and leads to the opposite desired result in the fight against anti-Semitism and in the process of reconciling our peoples,” the diplomats said in a joint statement.

The most revealing case was the case of Vasily Marushchinets, the consul of Ukraine in Hamburg, who was removed and fired for denying the Holocaust, anti-Semitic and xenophobic statements on his social network page. However, in December 2019, by a court decision, he was returned to work at the Ministry of Foreign Affairs, which caused a wave of international condemnation, including in Israel. In addition, Marushchinets also received compensation from Ukraine in the amount of more than UAH 230 thousand.

From which it can be concluded that the Ukrainian authorities and courts secretly either support such manifestations of anti-Semitism, or try to close their eyes to them. But this happens, most likely, in conjunction with the support of nationalist ideology as a whole as a new course of the Ukrainian state after 2014, which periodically becomes a component of anti-Semitism.

For this reason, it is likely that Pritula and Radio New Time will be held responsible for the anti-Semitic scandal only if the Jewish communities and human rights activists actively control what is happening. Otherwise, they may try to «forget» what happened.