“Kill Portnov and Kiva”. Right-wing radicals have created an analogue of the Myrotvorets (Peacemaker) in Telegram 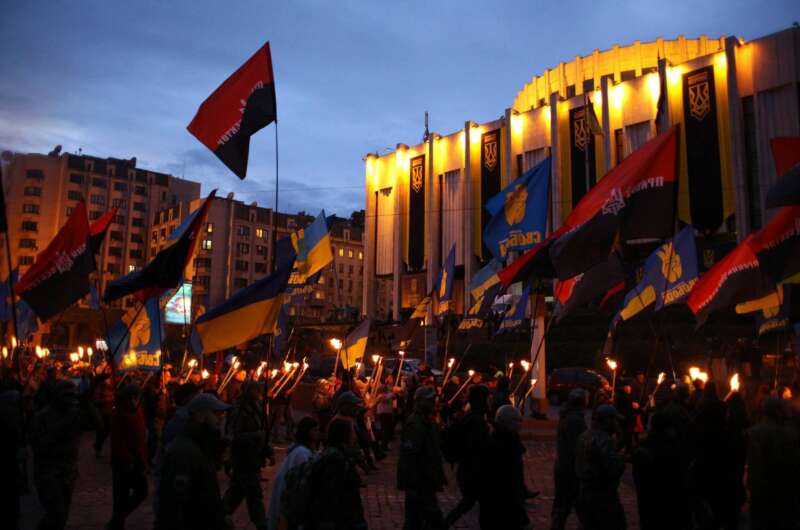 Right-wing nationalists in their Telegram channels publish the accounts of activists opposing violence and traditional values, anti-fascists and dissidents, calling for reprisals against them. The public «Aviary», which is supervised by an associate of the head of the right-wing radical organization «Brotherhood» Dmitry Korchinsky, has more than 1,500 subscribers.

So, in the public they publish photos and links to accounts on social networks of left-wing activists, artists, journalists and politicians. In their posts, they publish personal information, sometimes addresses and other data of people who, in their opinion, act “not in the interests of Ukraine” and call on right-wing activists “to pay attention to them”. In terms of its message, the channel resembles the Myrotvorets base for a narrower circle of right-wing radicals.

“We want to drive all the leftists into a kind of enclosure — a public base, so that we could limit their destructive and harmful activities for Ukraine,” the founder of the public said anonymously.

For example, they recently «leaked» social media links to a 19-year-old LGBT activist who removed a right-wing poster that she said «offended the community’s feelings.» The channel published her name, photo, as well as the names of her parents. Also previously published pictures and data of the Ukrainian artist Vladimir Vorotnev. The public called the artist a “leftist destructive element” and added that he “wants to be buried in a flowerbed”.

Although the channel notes that “no one is being called to violence,” the rhetoric of the publications testifies to something else: it is about “physical influence”, remarks about the advisability of “liquidating” or “non-liquidating” individuals. Videos are also published in the channel, in which they are pursued and sprayed with tear gas on those whose photographs are posted in the «Aviary». In one of their posts, they directly called for “active action” — to beat up activists or “send them to hospitals” with grave consequences. “The most courageous,” they say in public, are the right-wing radicals who decide to commit an atentat, that is, a political assassination.

“If you have chosen the necessary target for the assassination attempt, there are two ways. An open attempt on the life of the UPA, or anonymous liquidation of the enemy, ”they write in the channel.

And they add that in the case of a successful operation «to liquidate some Kiva» (People’s Deputy from the Opposition Platform – For Life Ilya Kiva, — Vesti.ua), the attacker will receive «the high status of a Ukrainian political prisoner, very cool media coverage and a criminal term of 10-15 years.» , which supposedly have to mow up to 5 years because of «public support». In addition, they suggest that for «liquidation» you can use the «services of a crime», that is, hire a hitman or members of an organized criminal group. They even provide rates for contract killings and methods for escaping to other countries after the incident.

“If you decide to go on the assassination attempt of the Portnov (lawyer, ex-head of the Presidential Administration Andrey Portnov, — Vesti.ua), then we wish you good luck. From us there will be transfers to the pre-trial detention center, and help with a lawyer, ”the channel writes.

According to Vesti.ua, the public is supervised by a right-wing radical activist, ATO veteran Oleksiy Svinarenko, nicknamed Stalker, who was a suspect in the murder of Berkut fighters on February 18, 2014 on the Maidan. He repeatedly organized actions and came to the rallies of left-wing activists.

For example, on January 19, 2020, at a rally in honor of the anniversary of the murder of journalists Stanislav Markelov and Anastasia Baburova on European Square, his associates threw stones and eggs at activists, and on March 8, at a women’s solidarity rally in Kiev, he and his associates shouted “Death to feminists” … He is the leader of the National Resistance public organization and is in close contact with the head of the Brotherhood organization Dmitry Korchinsky.

Note that this is not the only Telegram channel on which right-wing radicals publish addresses and other personal information of left-wing activists and opposition politicians. So, the public «Put down the vatniks (rude nickname of russians)» appeared in early March 2020 and it published information, for example, about People’s Deputy Maxim Buzhansky, the head of the organization «Patriots for Life» Oleg Shiryaev, and in fact announced the war to all the associates of the «Party Sharia», calling on subscribers channel to reprisals against them.

Shiryaev said in an interview with Vesti.ua that the public is hosted by the nationalist Alexander “Volkov” Demidov, who appeared in the incident with the attack on the former adviser to the Secretary of the National Security and Defense Council of Ukraine on the issues of reintegration and restoration of Donbass, Sergei Sivokho.

“The admin there is Aleksandr Demidov, they released a video about how they beat me and showed me my phone number … Threats started flying, in the format“ we will get you and your family ”. They put a funeral wreath under my parents’ house, ”Shiryaev told us.

As attorney Yuriy Zakharchenko told Vesti.ua, Telegram channel administrators can be prosecuted, but this will be difficult due to the fact that the channel is conducted anonymously.

“It is obvious that the actions are illegal — criminal information is being disseminated, there are frank calls for murder, incitement to hatred. There is responsibility for this. However, it is difficult to prove the involvement of the head of the channel, even taking into account that the police will know his name. In addition, a person definitely knows what he is doing, so it is almost impossible to admit that he is the author of the channel, ”the lawyer says and adds that it is technically impossible to establish who runs the Telegram channel.