Lavra round table: Anti-Church law must be repealed urgently 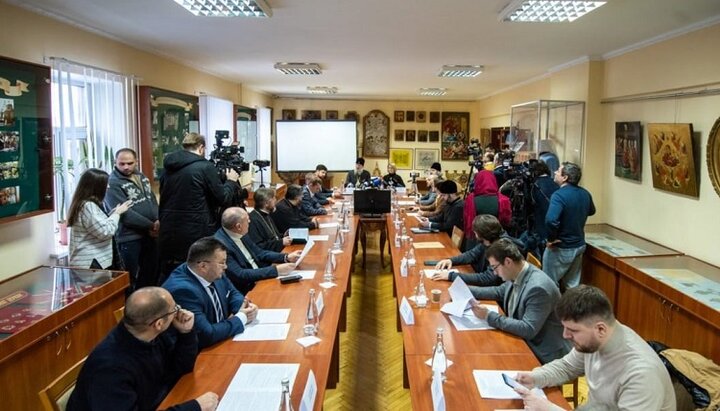 The law on renaming contradicts the principles of freedom of conscience, the Constitution and international legal documents, the participants of the meeting in the Lavra decided.

You need to immediately cancel the so-called The law on forced renaming, which contradicts the basic principles of freedom of conscience, the Constitution of Ukraine and international legal documents, and also threatens interfaith peace in the country. This is stated in the document adopted on December 20, 2021 at a round table in the Holy Dormition Kiev-Pechersk Lavra on the topic: «Three years of attempts to forcibly rename the Ukrainian Orthodox Church: consequences, assessments, prospects,» the UOC Information Center reports on its Facebook page.

Attempts to portray the UOC and its millions of loyal citizens as «enemies of Ukraine», «fifth column», someone’s agents, on the basis of which to deprive the Church of its name and impose some other name on it are called provocative, manipulative and insidious. The participants of the round table stressed that such attempts at the legislative level are especially dangerous.

It is indicated that the implementation of the anti-church Law for three years led to the impossibility of registering new religious organizations of the UOC and their leaders, making changes to existing charters and updating data in the state registers of Ukraine. It is noted that the ongoing cases of illegal re-registration of religious communities of the UOC in the OCU (almost 500 corresponding offenses) are also largely related to the consequences of the adoption of this Law.

The participants of the round table called on the authorities to immediately repeal the anti-church law and expressed hope for the wisdom and truly state, and not populist and adventurous thinking of the current convocation of People’s Deputies of Ukraine. «Possible ways to solve this problem could be the decision of the Constitutional Court of Ukraine on the unconstitutionality of this Law or recognition by the Verkhovna Rada of Ukraine of the current convocation of the error made by the previous convocation of the Verkhovna Rada, the illegal nature of this Law and correction of this error by repealing this Law,» the results of the round table say.

At the same time, it is noted that the authorities have not yet responded to the appeal of more than 1 million believers of the UOC, who in April brought to the Presidential Office in Kiev an appeal to Vladimir Zelensky about the persecution of their Church. Therefore, the participants of the round table consider it appropriate to announce a new collection of signatures of citizens under the appeal on the need to repeal the anti-church law.

«We are convinced that such an appeal will be supported not only by the faithful of the UOC, but also by everyone who cares about the observance of fundamental rights of citizens in our country and the Constitution of Ukraine, ensuring inter-confessional peace, social harmony, and, consequently, a decent future for our country. Everyone who is a patriot of Ukraine not in words, but in deeds, who values and respects the citizens of Ukraine, regardless of what church they go to, what language they speak, or what national community they belong to, » the authors of the document concluded.