Nationalists threatened judges with reprisals: how SS «Galicia» was recognized as legal 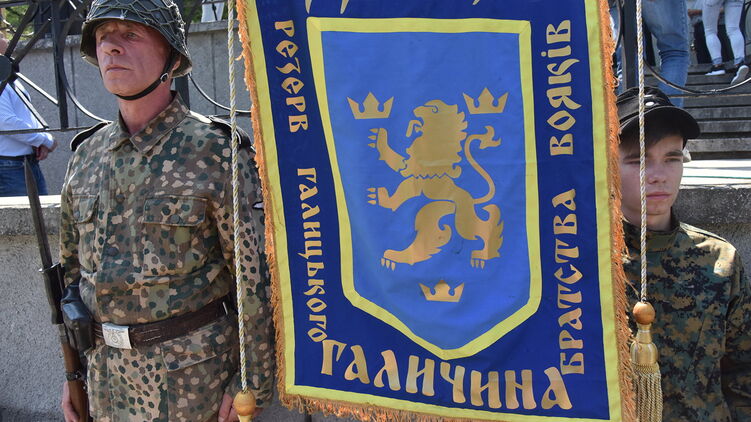 The Kiev Court of Appeal overturned the decision recognizing the symbols of the SS «Galicia» as Nazi.

But after such a decision, the two judges who accepted it publicly announced the threats to their lives from the radical nationalists.

Why, almost a year and a half after the «collapse of the pig farm», nationalists continue to nightmare the courts? And what exactly is the SS Galicia division? We understand the new material.

In simple terms, the court did not recognize the symbols of the SS «Galicia» as Nazi. And thus supported the «Ukrainian Institute of National Memory», which, even after the departure of the odious Vladimir Vyatrovich, continues to whitewash the dubious image of the SS division.

It all started with the fact that on May 27 of this year, the District Administrative Court of Kiev recognized that the symbols of the SS «Galicia» division were Nazi. And the policy of the Ukrainian Institute of National Memory and its former head Vyatrovich is illegal and unacceptable.

The decision was taken at the suit of a resident of Kiev, a certain Natalia Myasnikova. Brave woman! In fact, in May, a Ukrainian court banned the symbols of the SS Galicia division.

This military formation was created by the Nazis, in Lvov, in 1943. After the so-called «revolution of dignity», at the suggestion of the new authorities, the members of the division were elevated into a cult, made heroes of Ukraine.

According to the May court decision, Ukrainian officials are prohibited from exaggerating the myth that the division’s symbols do not fall under the law banning communist and Nazi symbols. For the following words against Vyatrovich, it was possible to initiate a criminal case!

Meanwhile, Vyatrovich’s replacement, Anton Drobovich, immediately announced that the Institute of National Memory entrusted to him would definitely appeal the court decision. And really — what’s wrong with the glorification of Nazism?

In her claim from Kiev, Myasnikova noted that the SS Galicia division was part of the Waffen-SS troops, which the Nuremberg Tribunal recognized as a criminal organization in 1946. According to the applicant, the Institute of National Memory grossly distorts historical facts and exceeds its authority. And then, in May, the court accepted her arguments.

However, the May District Court decision canceled out yesterday’s Court of Appeal decision. Themis made a very strange decision … But not everything is so simple!

The judges of the Administrative Court of Appeal were threatened by nationalists on the eve of hearings in the case of the SS Galicia division. Due to the incoming threats, two judges turned to the police at once — Elena Kuzmishina and Natalya Buzhak. Two out of three judges hearing this case.

The judges complained that they received threatening SMS. Anonymous “patriots” declared the judges “accomplices of the Putin-Kremlin separatists and their lackeys in power,” and promised to punish them if the previous court decision was not canceled.

And the threats of the Natsik worked — the decision of the Kiev District Administrative Court was canceled, and now Vyatrovich and Drobovich can again use the symbols of the SS Galicia division. Peremoga!

The glorification of the SS «Galicia» division at the official level began immediately after the 2nd Maidan, when the Institute of National Remembrance appeared. It was headed by the ardent decommunicator Vladimir Vyatrovich, a professional propagandist and clinical Russophobe.

At the same time, the Verkhovna Rada adopted a law banning communist and Nazi symbols. True, Ukrainian politicians of a pro-Maidan style flirtatiously bypassed the second part of the law’s title. Emphasis was placed on the prohibition of the communist symbols. And not a word about Nazism!

Ukrainian cities and villages were thoroughly cleared of the Soviet communist heritage. By August 2017, as part of decommunization, more than 2 thousand monuments to Lenin were dismantled in Ukraine. A titanic work, worked tirelessly!

However, after all the Ilyichs were knocked down, people had a reasonable question: what about the fight against the symbols of Nazism?

The same «Galicia» clearly falls under the law banning communist and Nazi symbols. This division was formed in the structure of the SS — recognized by the results of Nuremberg as a «criminal organization». SS «Galicia» was created by personal order of Hitler. And her symbolism is appropriate, purely SS.

Lawsuit against Vyatrovich because of SS «Galicia»

However, Vyatrovich remained adamant: the SS Galicia division fought for Ukrainian independence and symbolizes «good» and «justice». It was after this that a lawsuit was filed against the head of the Institute of National Memory, which was considered for three whole years. Or they could solve everything in a month. Historical facts — at a glance!

In April 1943, the ceremony of creating the SS Galicia division was held in Lvov. The governor and future SS Gruppenfuehrer Otto Wächter was personally present in the building of the occupation administration — the Galicia district.

The Ukrainian division as part of the SS was led exclusively by German officers, who also recruited people. In fact, it was a combat unit of the Third Reich. For example, SS Reichsfuehrer Heinrich Himmler welcomes the SS division of Galicia. Well, what more proof is needed? Poke Vyatrovich’s face into this photo — and let him say something!

But we have what we have. In Lvov and other cities and villages of Western Ukraine, the Nazi division was glorified … and glorified at the official level. Monuments, memorials are protected, marches are organized in honor of the SS division.

So, in April 2018, Lviv officials decided to widely celebrate the 75th anniversary of the creation of the SS Galicia division. They organized a noisy March of embroidered shirts, which moved from the Bandera monument to the Shevchenko monument.

And for the dubious anniversary, the Department of Education of the Lviv City Council organized a drawing competition among children. The theme of the competition is «Ukrainian volunteers in the ranks of the SS Galicia division». Leaflets calling for participation in the competition were distributed on the streets of Lviv and on the Internet.

Do you understand, do you? If a boy or girl draws a good SS man or a meeting of Reichsfuehrer Heinrich Himmler with the personnel of the division, he will receive a well-deserved prize — 3 thousand hryvnia.

Pay attention, friends! The apology of Nazism, unfortunately, continues under Zelensky. By the 77th anniversary of the SS Division of Galicia, in May this year, a nice congratulation on the anniversary of its creation appeared on the official website of the Lviv Regional State Administration. At the same time, they decided not to mention the fact that the division was part of the SS troops of Nazi Germany.

But it is especially «touching» to listen to old men-veterans of the SS division of Galicia, who, at least in Lviv, feel like heroes. Unlike the veterans of the Soviet army.

Can you imagine, friends, what it feels like to see and hear the bravura speech of the old SS man to the veterans-liberators of Ukraine? There are already less than 20 thousand of them left in our country.

How do they feel when they turn on the TV and see how the Ukrainian government honors those against whom they selflessly fought in their distant youth? And they won a heroic victory!

Some veterans of the Great Patriotic War, abandoned by the state to their fate, go to desperate deeds!

This is how our veterans live. And after yesterday’s decision of the SS court «Galicia» is held in high esteem again!

Fortunately, Natalia Myasnikova and her lawyer from Kiev are not going to surrender, and they promise to file a complaint with the Supreme Court of Ukraine so that a final decision can be made there as to who the members of the SS «Galicia» division were — heroes, fighters for independence Ukraine, or villains and servants of the Wehrmacht?

However, one can hardly count on a fair decision of the Supreme Court. The local judges can also receive threatening SMS!

How good it is that we live in a civilized, legal power.