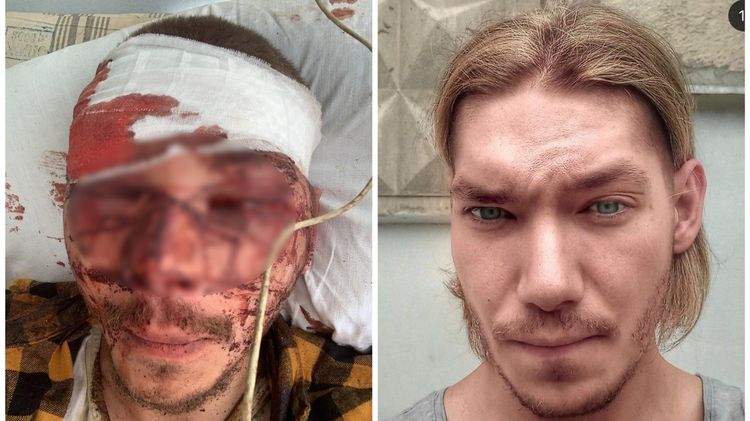 On June 25, in the morning, blogger Anatoly Shariy posted photos of the beaten guy on his Telegram channel. According to him, Nikita Rozhenko is a member of his party, who has previously received threats from the National Corps. Focus has collected everything that is known about this situation.

This morning, blogger Anatoly Shariy said that a member of his party in Kharkiv was beaten with bats by representatives of the National Corps.

Two hours before the incident, the young man allegedly wrote a statement to the police about the threat to life from the National Corps. In support of this information, Anatoly Shariy published a coupon from the police about registering an application.

Judging by the ticket, the beaten guy’s name is Nikita Rozhenko. On his Instagram profile, which probably belongs to him, the young man does not hide his membership in the Sharia Party.

Anatoly Shariy claims that specific people from the National Corps, Konstantin Nemichev and Maxim Zhorin, were involved in the attack. Yesterday, on June 24, Nemichev announced on his Facebook a protest rally near the office of the OPFL. In his post, Konstantin argues that «the Kremlin’s agents from the OPFL and the synthetic project for discrediting everything Ukrainian called the Shariy party pose a direct threat to national security and undermine the foundations of Ukraine’s sovereignty.» In addition, he promised to «catch up» with every political opponent in any effective way.

Maxim Zhorin, the head of the central headquarters of the National Corps, also posted on his Facebook posts about a «new wave of greetings» to Sharia’s supporters.

On June 16, Maxim Zhorin, in his video message, called Shariy a «rat» who uses his supporters «like cannon fodder» and said that they were «regularly killed like cattle.»

The police of the Kharkiv region confirmed the fact of the attack, saying that on the night of June 25, two unknown persons attacked a 28-year-old citizen and inflicted bodily harm on him. Investigation under Art. 296 of the Criminal Code (hooliganism).