Radicals from the National Corps beat up photo correspondent 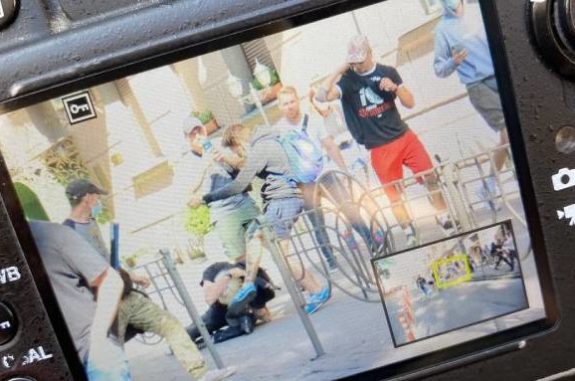 August 14 after actions of the National Corps «Stop capitulation» «peaceful» protestants beat up Alexander Kuzhelny, a photojournalist for the «Letters» publication. The attackers filmed everything that happened and later published a video of the attack, according to the publication.

According to Kuzhelny, even during the rally, an unknown person in a balaclava in an imperative form demanded that he leave. After that, the photojournalist, who has recently been attacked, decided to leave immediately after the event, so as not to provoke the situation, but did not have time.

from. But they didn’t let go, they started saying that I was a “leftist”. I suggested that they approach Andrey Biletsky, who will confirm that I am a journalist. They didn’t agree to go anywhere. One started hitting me on the leg, the other somewhere in the head, and I fell»— said Alexander Kuzhelny.

He also noted that one of the attackers, before using force against him, recalled the attack that took place on July 21 in front of the court., where was the meeting held in the case of Alexey Bolenkov, and the attacker-Russian neo-Nazi Mikhail Shalankevich, nicknamed «Hans».

«When it all started, more guys were pulling up, and one of them exclaimed:» Oh, this is the one that Hans gave a f****!». In the photo you can see that the same person is kicking me on the head», — said Alexander Kuzhelny.

According to him, after other journalists approached, the attackers retreated. Kuzhelny wrote a statement to the police. He assesses his condition as satisfactory, fortunately escaped with bruises and abrasions.

But the severity of the injuries in this case is not as important as the degree of impunity and permissiveness felt by radical «patriots» who believe that they have the right to beat people in the center of the capital in broad daylight. And if our valiant law enforcement officers again get off with a» fatherly » preventive conversation or admin panel for hooliganism, next time such an outburst of brutalized youngsters from the National Corps may end in tragedy for their next victim.

Recall that today’s clash under the Office of the President of representatives of the National Corps with law enforcement officers personally commented Minister of Internal Affairs of Ukraine Denis Monastyrsky. He said that criminal proceedings had been initiated on the fact of causing injuries to police officers and promised that all those responsible would be brought to justice. I would very much like to hope that this also applies to those who beat Kuzhelny.