Registration of the status, the issue of housing and payments from the state. How Ukrainian refugees are settling in Germany 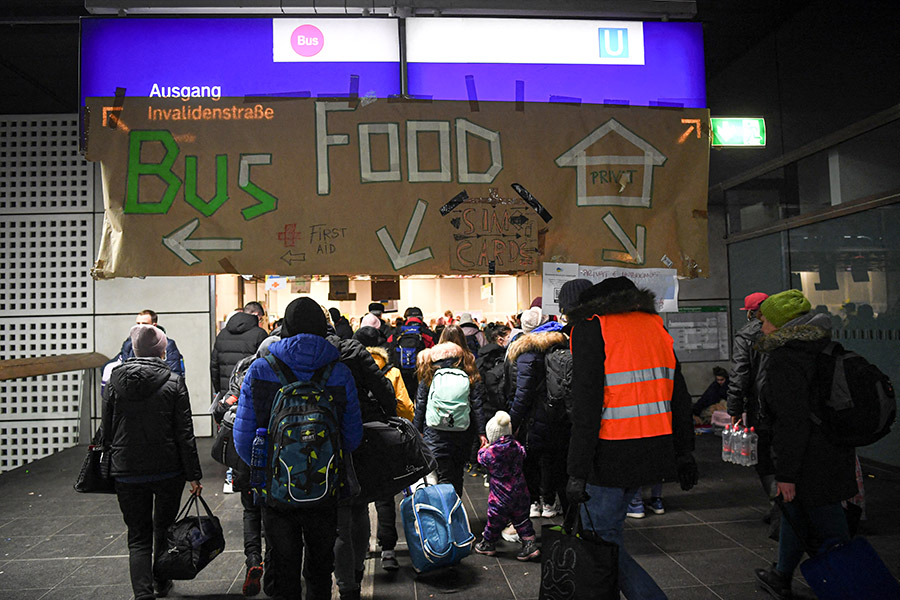 At the moment, only a part of the refugees from Ukraine have passed the initial registration and, according to German officials, there are much more who came from Ukraine than the official figure of 146,998 people (as of March 13, 2022). Anna, a large resident of Kiev, shares her personal experience, who traveled 66 hours with her large family (husband, two sons and daughter) from the suburbs of Kiev to the south of Germany.

«My husband and three children and I drove to the EU on March 1, two days later we reached our destination in the provincial town of Saabryukken with a population of 175,000 people, like our Melitopol or Bila Tserkva. My mother, a pensioner, was already here, who arrived a week before the start of the war to visit and, fortunately, did not have time to return home. After studying the information for 10 days, we realized that we are war refugees and can apply for temporary asylum in Germany in accordance with § 24 I Aufenthaltsgesetz. This is a kind of «mix» of a residence permit and political asylum, allowing social benefits, financial assistance and at the same time have the right to work. Terms from one to three years,» says the Ukrainian.

In practice, few people in Germany have managed to get such a status yet. We managed to communicate with five Ukrainian families in different parts of the country, and none of them has yet passed this procedure. After all, the innovation was adopted at the federal level, but each land has not yet mastered the process itself in practice. «In Berlin, we have already visited the central station and the refugee registration places several times, but we were sent home. Like, nothing is clear yet. They promised to accept the documents after March 16,» says Bogdana from Kiev, who arrived in the German capital with two school-age sons. They were sheltered by friends in their private home.

The Commissioner of the German government for Migration, Refugees and Integration, Rima Alabali-Radovan, said that Berlin is ready to accept an unlimited number of refugees from Ukraine, Deutsche Welle reports. However, those who are now arriving in the capital are distributed further by region. And the documents are first of all made to those who are in a refugee camp. And then not immediately. To begin with, you need to undergo mandatory quarantine for 7 days (even if you have a full course of vaccination or a certificate of recovery after coronavirus), then take a covid test and only then you can contact local clerks.

If Ukrainians have a place to live in Germany (they stayed with relatives and friends or found a place to rent), then the government asks them not to rush with the registration of the so-called «war refugee». After all, according to the «visa-free», you can stay in the country for 90 days and 90 additional days due to the war. Moreover, the state made concessions, due to the large number of appeals from Ukrainians, and provided an opportunity to submit documents to the social service at the place of temporary residence in order to receive financial assistance immediately. We are talking about the amount for food, it is about 370 euros for an adult, 220 euros for a child. Allowances for seasonal clothing are expected once a quarter.

«We arrived in the Sozialamt of our town after an unsuccessful attempt to apply for documents in a refugee camp. There was utter chaos going on there, the employees themselves didn’t seem to understand until the end of the procedure. Crowds of people, no organization and, most importantly, information. But in the social service everything was at the highest level. Electronic queue, Russian-speaking employees who help to fill out the form correctly. There are treats and toys for kids in the corridors. The employees are sympathetic, no quibbles about the documents. The reception takes about half an hour. During this time, the data is processed. It is important to have passports, know your temporary shelter address and have someone familiar with a bank account. He will receive the first payments. They promised to process the application within 7-10 days. We are still waiting for the result by e-mail,» says Anna from Brovary.

By the way, some German banks have already started opening accounts for Ukrainians. To do this, you need to make an appointment at a specific branch and come with a passport. Ukrainian credit cards work everywhere in Germany, you can pay or withdraw money at an ATM without commission, but at the rate of 34.6 UAH for 1 euro (the rate is relevant for Raiffeisen Bank on 03/15/2022). and there is a limit on the amount of no more than 10 000 UAH per day. But cash hryvnia in Germany is almost impossible to exchange.

There are a dozen applicants for one apartment

Also, the social service will help you with the registration of payments for accommodation, if a Ukrainian has found an apartment for himself. They take over the payment of rent and utilities, which on average account for another 20-30% of the cost of rented housing per month. The amount that the state covers varies depending on the region and the composition of the family. Below are the prices of the Saarland in the south of the country. Due to the large number of «new arrivals», it is quite difficult to rent an apartment now. Ukrainians who have been living in Germany for a long time recommend considering villages rather than large and popular cities. «We have been monitoring ads for a week and going to viewings. There are a dozen applicants for one apartment. And not all owners want to deal with government payments. Therefore, it is quite difficult to find at least something,» says Tatiana and Oleg, a family of Odessa residents.

They are looking for a «two-piece» in the city of Saarluis. Prices bite. The lowest cost is 500 euros. And that’s for the bare walls. Without furniture, household appliances and sometimes even without sockets with lamps. Moreover, German landlords want to see that a potential tenant works officially, has a stable income and can provide a deposit in the form of payment for two to three months. For many refugees, this is simply too much. But then the social service comes to the rescue again, which is ready to pay rent, communal services and even a deposit directly to the apartment owner (although this amount will be on account of other benefits). In addition, reimbursement of expenses for furnishing housing with essentials (kitchen furniture, stove, refrigerator and washing machine for families with children) is provided. Naturally, these should be budget brands and not the most sophisticated models. The refund of funds spent on household utensils is made upon application, supported by checks.

If in Berlin for 500 euros a month (without heating, water, light) you can rent only a one-room apartment on the outskirts next to the Syrians. Then in the province for this money you can find a three-piece in a decent area of 70-80 sq.m.

The benefits of a war refugee

There is also an opportunity to officially work. After all, legal employment is prohibited on a tourist visa. The situation in German towns and villages is more than positive. Ukrainians are warmly welcomed. They turn a blind eye to the lack of insurance for the car (the so-called «green card») or minor traffic violations. Protests against the war and support for Ukraine are taking place everywhere. Many municipal buildings in the center are highlighted in yellow and blue or decorated with our moisture. Even ordinary Germans hang yellow and blue symbols in the windows as a sign of solidarity.

There are a number of announcements about the settlement, when the owners of houses rent out the ground floor or share part of their living space. Basically, these offers are for moms with one child.