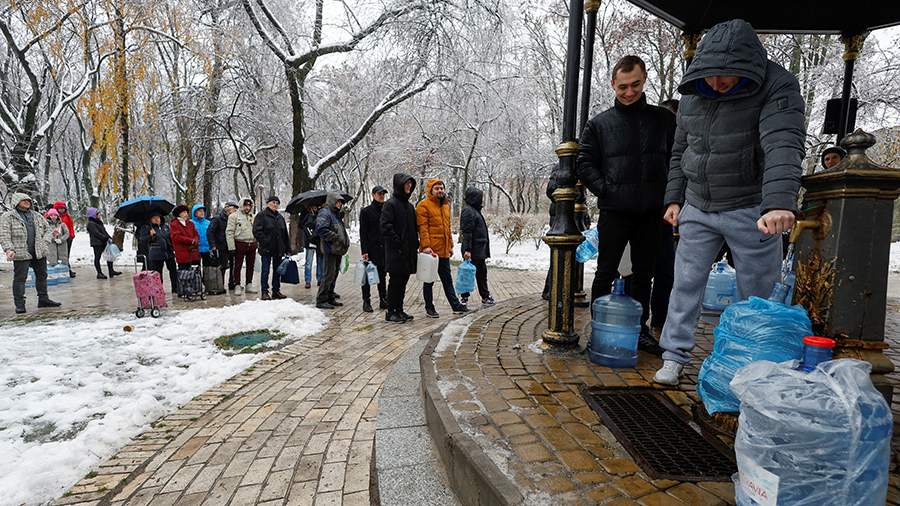 «Kiev Vodokanal» recommended the residents of the city to stock up on water for household and technical needs, since in the event of a prolonged power outage, problems with water supply may begin. This was reported on December 10 by the Ukrainian edition «Страна.иа «.

The utility company explained that in the event of a prolonged absence of electricity, it would be impossible to establish autonomous operation of the equipment, so citizens were urged to make supplies.

Kyivvodokanal also announced the imminent appearance of water spill points in the city. Now the company is trying to purchase generators to provide centralized water supply.

On December 7, the mayor of Kiev Vitali Klitschko warned residents that the city could lose water, light and heat. According to him, the heating points prepared by the authorities will not be enough for all residents of the capital. At the moment, there are about 500 such points, and 3 million people live in the city.

The mayor of Kiev stressed that «an apocalypse, like in Hollywood movies, when it is impossible to live in houses because of the low temperature,» is quite possible.

On December 1, Klitschko said that Kiev risks being left without heat and water supply until spring if heating is lost in the city for at least one day. According to his estimates, in the event of a heat shutdown, the recently deployed heating points of citizens will not be enough.

Before that, on November 23, Klitschko warned that the city could face the worst winter since World War II due to a power outage. In this regard, the mayor called on European countries to help Ukraine with humanitarian aid, primarily with electric generators, warm clothes, etc.

Russian troops began to strike at the facilities of the military administration, energy and communications of Ukraine on October 10. As Russian President Vladimir Putin explained, this was a response to the terrorist actions of the Kiev regime, in particular, on the Crimean Bridge.

The special military operation to protect Donbass, which Putin announced on February 24, continues. The decision to hold it was made against the background of the aggravation of the situation in the region due to shelling by the Ukrainian military.