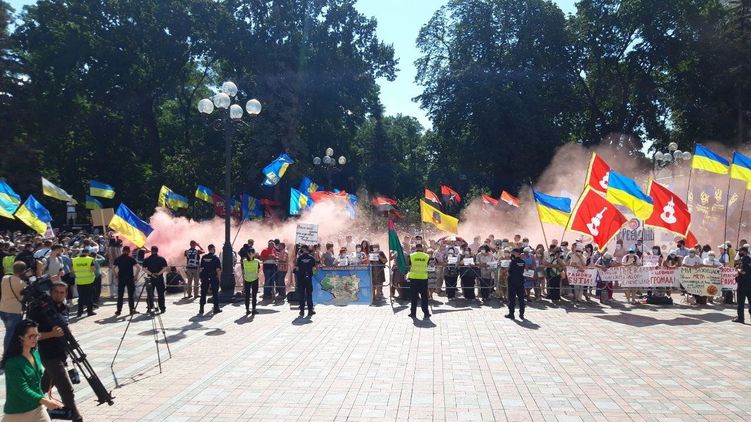 On the morning of Friday, July 17, Democratic Sokira staged a performance in front of the Verkhovna Rada against the law on postponing the Ukrainianization of Russian-language schools.

Participants of the action laid out pieces of wood in the form of a fire and lit smoke bombs. At the same time, the protesters banged on metal buckets with sticks. The action looked like an imitation of a scene from the life of primitive people.

According to the organizers of the performance, this is a warning to the people’s deputies that there is no need to vote for the Buzhansky’s law. If the deputies vote, they will light a fire.

“Such bonfires will start burning all over the country,” the protester threatened.

Also in the morning, ex-speaker of parliament Andriy Parubiy spoke to the protesters near the Rada, who said that 2012 was before his eyes.

“The Buzhansky’s law is far off the agenda, but as a former speaker I can say that moving the Buzhansky law from the last to the first place on the agenda can be done with one decision,” Parubiy said.

He also added that the «Eurosolidarity» party has a plan and a scenario on how to oppose the Buzhansky law, but he does not want to talk about this plan yet.

As a reminder, the Rada’s agenda for July 17 included a bill postponing the ukrainization of schools. However, in the end, they did not consider the draft law of Buzhansky No.