Stepan Bandera, Roman Shukhevych, OUN-UPA: the Jewish Committee told for whom the Kyiv City State Administration calls them to pray 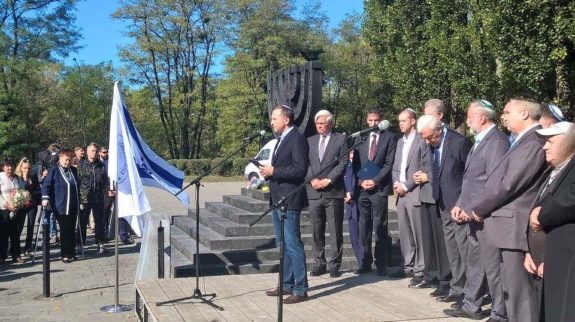 Director of the Ukrainian Jewish Committee Eduard Dolinsky released a letter in which the Kiev City State Administration (KSCA), on the occasion of the Defender of Ukraine Day, calls on Jewish communities to pray for historical characters and organizations with a controversial reputation.

He wrote about this on his facebook page and posted the corresponding document.

In it, the Kyiv City State Administration, referring to Poroshenko’s decree, calls on the Jewish communities to hold a prayer service in order to honor the defenders of Ukraine of all generations.

According to Dolinsky, such controversial characters as Simon Petlyura, Roman Shukhevych, Stepan Bandera are meant among them.

“The Kiev administration, referring to Poroshenko’s 2014 decree, recommends that the Jewish communities hold on October 14, the day the OUN-UPA was established, a prayer service“ to honor the defenders of Ukraine of all generations ”. The phrase «defenders of Ukraine of all generations» means: Bohdan Khmelnitsky, Simon Petlyura, Stepan Bandera and Roman Shukhevych, OUN-UPA. The holiday on October 14 was established by Poroshenko in 2014 at the initiative of Vyatrovich in honor of the founding of the OUN-UPA, as a replacement for February 23 «,— Dolinsky wrote.

Modern Ukrainian ideology has risen to a completely new level of immorality. Rabbi, President of the Federation of Jewish Communities of Russia Alexander Boroda writes about this on the pages of Nezavisimaya Gazeta, giving an assessment of the Kiev authorities, which demanded prayers from the Jewish priests for the glory of their executioners from the UPA.

According to Boroda, it is generally unacceptable for the state to interfere with the freedom of religious life and tell believers what and when to pray for.

“Of course, when there are some massive upheavals or, God forbid, tragedies, representatives of all faiths turn to the Almighty. So, now, during the pandemic, we are praying for the world to get rid of this disease, and the Orthodox and Muslim communities of Russia do the same. But it would be at least strange if the Ministry of Health of the Russian Federation sent us an official letter with a request for prayers, ”the rabbi said.

At the same time, state interference in religious affairs in this case seems to him the least problem.

«It is much more terrible that the authorities of the city of Kiev do not take into account the historical context at all. We see that the heroization of criminals, the public, consistent justification of their atrocities has reached the highest degree of cynicism, ”the author believes.

“We always publicly and sharply condemn when murderers are made into heroes, when history is shamelessly rewritten in front of still living witnesses, or rather victims and descendants of victims, when documented facts are denied, preferring opportunistic myth-making.

But the recommendation to Jewish communities dated October 14, 2020 speaks of a completely new level of immorality of modern Ukrainian patriotic ideology, «Boroda summed up.