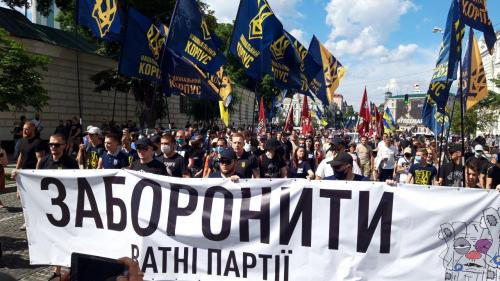 An interesting precedent is brewing in Ukraine — yesterday the public council under the Ministry of Justice demanded that the department begin the closure of two parties. These are the Opposition Platform and the Sharia Party.

Considering that there will be local elections in two months, the initiative is really scandalous. Especially considering that both political forces are the main competitors of the «Servant of the People» in the upcoming voting in the regions of the southeast. It is to them that voters who are disillusioned with the Ze-team go.

«Strana» was figuring out whether opposition parties would be closed before the elections.

Who demands the closure of opposition parties

On Wednesday, the National Corpus announced on its website that the Public Council under the Ministry of Justice is demanding that two political forces be banned — the OPFL and the Shariy’s Party.

The Public Council is an advisory body that today is attached to every major department. These usually include experts in the relevant field who establish feedback between officials and society.

But in Ukraine it turned out that in addition to real specialists, various activists also sit on the councils. And, as a rule, of a nationalist sense.

The Ministry of Justice also did not pass this cup — in it, many were in solidarity with the ultra-right party «National Corps».

In particular, the head of the Public Council Vasily Goncharuk. Who two weeks ago gave a press conference with representatives of Biletsky’s party. And also other organizations of the same kind — «Sokol» (the youth wing of «Freedom») and «Movement of Veterans» (an organization that worked under Poroshenko in the Ministry of Veterans). She was represented at a press conference by one of the members of Poroshenko’s «Demsocyra» Anton Columbet.

They said that they were submitting an application to the Ministry of Justice demanding to deprive the Oppoplatform and Sharia Party of state registration. The reason — these parties allegedly call for the violation of the sovereignty and territorial integrity of Ukraine.

«We demand (from the Ministry of Justice — Ed.) To apply to the District Administrative Court of the city of Kiev with a claim to ban the political party» Party Sharia «(legal entity identification code 39644910) and the Political party» Opposition platform — for life «(legal entity identification code 21709375) such as those whose programmatic goals and actions are aimed at violating the sovereignty and territorial integrity of Ukraine and undermining the security of the state, ”the joint statement of July 30 said.

The goals and actions of Oppo Platform, for which it is proposed to be banned, are very interesting. This is the equalization of the rights of all participants in the events at Euromaidan, as well as pensioners living in the controlled territories and in ORDLO.

That is, to ban the party, according to the logic of activists, it is necessary to pay pensions to the Ukrainian old people in Donbass for proposals. And to provide assistance from the state to the policemen who suffered on the Maidan.

“Some legislative initiatives have been registered from the OPFL in the Verkhovna Rada, which violate both from a moral, civil and political point of view, the rights of citizens of Ukraine. The participants in the Revolution of Dignity are offered to be equated with representatives of the internal affairs bodies (that is, those who, in fact, dispersed them) — in payments, social guarantees. This outrages those who really stood up for Ukrainian interests. They also propose to equate the pensioners of peaceful Ukraine and those who now live in the temporarily occupied territories: to simplify the payment of pensions, to cancel the submission of documents in paper form, ”Olga Kasyan, a member of the Platform for Public Initiatives, said indignantly at a press conference.

The «social activists» could not bring other equally specific claims. The National Corps also stated that there are alleged facts of financing of political forces from Russia — but they were never made public.

Yesterday, August 12, this statement was considered by the Public Council under the Ministry of Justice. And he decided to satisfy him — by recommending to Minister Denis Malyuska to apply to the OASK (District Administrative Court of Kyiv) with a claim to ban both parties.

After that, the social activists happily took pictures in the hall of the ministry. In the center, dressed in embroidered shirt, is the head of the council, Honcharuk. To his right is one of the leaders of the National Corps, Maxim Zhorin, who, we note, is not included in the crowd.

Both parties have already reacted to these intentions, accusing the authorities of being behind the ban attempt.

“The growing confidence and support of citizens in the work of opposition parties provokes hysteria among Ze-power, the war party and manual“ grant eaters ”fed by external creditors. In an attempt to prevent the political defeat of their regime, they are trying by any means to crush and intimidate the opposition, and they no longer understand any methods or means, ”says the website of the OPFL.

“Realizing that nothing shines in the elections, the Servant of the People decided to ban their competitors,” Anatoly Shariy reacted.

Formally, the opinion of the Public Council may not be taken into account by the Ministry of Justice. Therefore, legally, his decision does not launch the process of banning both parties. It’s just a «public proposal.»

This is approximately how the head of the department, Denis Malyuska, described it in his commentary to Strana. He denied the intention to ban the party through the courts.

However, there is also a workaround. Force the Ministry of Justice to consider the ban on parties through a court decision.

At least the District Administrative Court has already accepted a lawsuit demanding the Ministry of Justice to ban the Shariy’s Party. It is possible that a similar claim will be filed against the Oppo Platform, and then Malyuske’s department will be obliged to comply with the court’s decision and consider the ban on parties.

From a purely legal point of view, the likelihood that the Ministry of Justice will find grounds for banning these parties is minimal.

Any party may indeed have its registration revoked if it calls for a violation of the territorial integrity of Ukraine. Or it is financed illegally. However, the applicants do not provide such facts. And the thesis that Ukraine could be ruined by the payment of pensions to old people from the «DPR» and «LPR» is unlikely to be taken as an argument.

Therefore, so far everything looks like the actions regarding the banning of parties are public relations of nationalists. Both the «National Corps» and other ultra-right movements, as well as organizations close to Poroshenko.

However, there are also several points that indicate that the authorities may indeed attempt to ban parties.

At the same time, the flow of voters from the «Servant of the People» to the «Oppoplatform» and to the «Sharia Party» is taking place where at one time the political force of the president took the most votes — in the south and east of the country. Which means for the «servants» an almost inevitable defeat in local elections to regional councils and city councils.

Second, in previous years, the position of the West was an important safeguard against repression of the opposition. In the days of Poroshenko, the US and the EU often appeased Bankova’s ardor for reprisals against the unwanted and asked to keep «within the bounds of decency.» However, now, against the background of growing tensions in the West’s relations with Russia and China, the position may change.

Yesterday, Charge d’Affaires of the United States in Ukraine Christina Queen published a rather tough article on the website of the American embassy, ​​in which she attacked the «stream of disinformation» spread in Ukraine regarding the external administration of the country and linked it to the «hand of the Kremlin.»

“They argue that the West seeks to ‘rule Ukraine’ or is pursuing its own interests at the expense of Ukraine. This is a false theory propagated by those who do not want to see Ukraine realize its full potential as a rich, prosperous democracy, making full use of the talent and creativity of its people … We have seen long-standing Russian disinformation — and outright lies — about “secret American biolaboratories «was again launched simultaneously in Georgia and Ukraine … We also saw how some well-known Ukrainians and Ukrainian media falsely accused the reforming partners of the West of misusing aid funds,» Queen lamented.

Note that the topic of the US biolaboratory in Ukraine was voiced by People’s Deputies from the Oppo Platform Renat Kuzmin and Viktor Medvedchuk. MPs from the OPFL also regularly and sharply criticize Ukraine’s external governance. Therefore, it is not difficult to guess who Christina Queen meant. At the same time, she, of course, did not directly call for the banning of parties and repressions against the opposition.

However, this attitude of the American embassy can theoretically be used by those in power who promote the idea of ​​banning opposition parties. That is, they may try to “sell” this “project” to the Americans under the pretext of fighting the “Russian threat”.

True, even if the government decides to take this path, it is not a fact that it will be implemented in practice. The process of deregistration of a party in any case must go through the courts. And this is a long process. Given that the verdict of the court is by no means programmed. As shown, for example, by the decision of the Shevchenko District Court, which refused the SBU and the Prosecutor’s Office to seize the assets of the 112 TV channel.

A little more than two months are left before the elections, and during this period the issue may not be resolved, and then the relevance of the topic will disappear altogether.

Another point is that the authorities can at the local level, through the regional departments of justice, try to prevent parties from participating in elections in certain regions. So, for example, under Yanukovych in 2010, “Batkivshchyna” was not allowed to participate in the elections in the Lviv region. And in 2015, they prevented the admission of the “Opposition Bloc” in the elections in Kharkiv and the region.