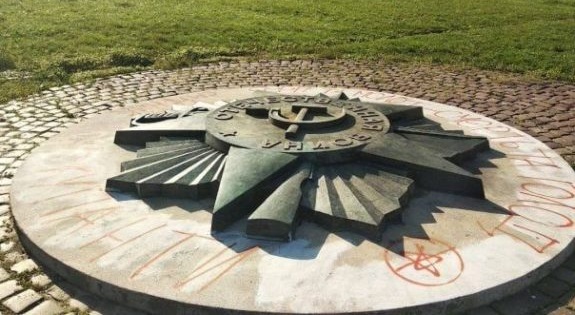 In Ministry of Foreign Affairs of Russia they strongly condemned the course taken by the Ukrainian authorities to dismantle monuments to Soviet soldiers. This is stated in note of protest, sent by the Russian Foreign Ministry to the Ministry of Foreign Affairs of Ukraine in connection with the plans of the Lviv authorities to remove the copy of Orders of the Patriotic War from the Field of Mars war Memorial.

The Russian side demanded that Ukraine fulfill its international obligations to protect and preserve war memorials.

«In connection with the plans of the Lviv authorities to destroy the copy on the military memorial «Field of Mars» on July 30, a note from the Russian Foreign Ministry was sent to the Ministry of Foreign Affairs of Ukraine demanding that the Ukrainian side comply with international obligations and the norms of national legislation on the protection and preservation of military memorials», – the Russian Foreign Ministry said in a statement.

In addition, the Russian Foreign Ministry called on Kiev to abandon falsifications of history and attempts to deprive Ukrainians of Victory in the Great Patriotic War.

Recall that the monument did not fall under the law on «decommunization» , but in the spring of 2019, it began to be dismantled, declaring the Monument an emergency. Even then, many people said that the «accident rate» was only an excuse, since the «Soviet relic» could not stand in a hundredweight of Ukrainian Lviv and annoy the eyes of»patriots».

The first to be scrapped was a 30-meter stele. Then they forgot about the Memorial for two years, and in the spring of this year, they dismantled bas-reliefs with images of Soviet soldiers, and on July 23, the central sculptural group of the Monument of Glory — two bronze figures – the Motherland and a Red Army soldier holding a sword-was finally dismantled.

A clear indication of the attitude of the Lviv authorities to the memory of Ukrainian soldiers who fought against fascism is the appalling state of memorial plaques with the names of soldiers who died in the battle for Lviv, against the background of neat and well-groomed graves of UPA members, which are located nearby on the Field of Mars.

Klymenko time  has  repeatedly written about how in Ukraine under the cheers of national patriots they are rewriting history, gradually leveling the significance of the victory over fascism in the Second World War, including the mass struggle against the «Soviet heritage» in the form of monuments.

For your reference: The Field of Mars was built in Lviv in 1974. This is a war memorial, where 3,800 Soviet soldiers who died during World War II are buried.