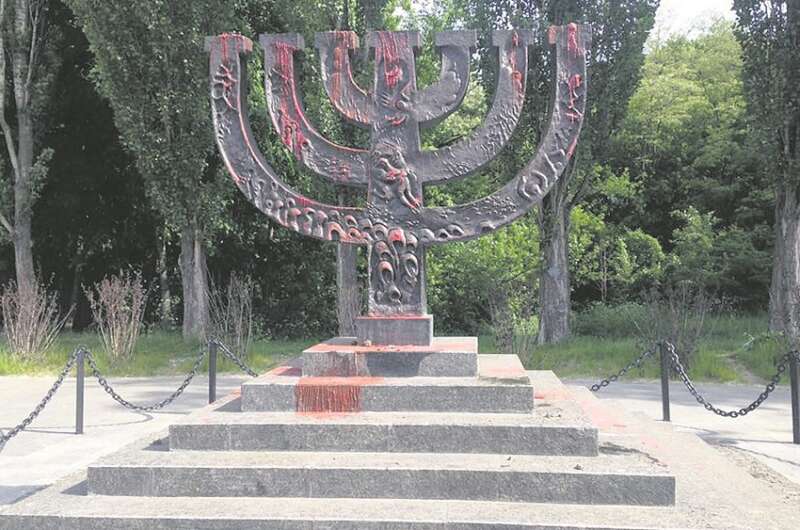 Everyday anti-Semitism is sweeping across Ukraine. The figures for the number of citizens prone to such manifestations appear in a study recently conducted by the American Anti-Defamation League (the oldest organization that fights xenophobia and anti-Semitism in any form). The poll showed that 46% of Ukrainians, or 16.8 million, «harbor anti-Semitic sentiments,» while answering the question «Do Jews have too much power in the business environment?» 72% of Ukrainians answered in the affirmative. Moreover, ambiguous statements are already appearing on the Facebook pages of people involved in the government.

What they write in FB

Anti-Semitic statements are collected and published on his Facebook page by the director of the Ukrainian Jewish Committee, Eduard Dolinsky. Over the past six months, there have been at least thirty of them — and these are the most famous cases. The editorial board of Vesti decided to publish these statements in part, for the sake of understanding the depth of the problem for readers.

“Jews and Poles, f@ck away,” wrote Sofia Semchishin, daughter of ex-Rada deputy from the “Freedom” party Irina Farion, responding to the statement of the ambassadors of Poland and Israel about the unacceptability of honoring Stepan Bandera and Andrei Melnik in January. The piquancy of the situation is that Sofia is the chief specialist of the information policy department of the Lviv City Council.

Its boss, Yuriy Lukashevsky, gave a florid comment: “Employees of the City Council bear more obligations and responsibility for words than ordinary residents”, which does not mean whether the Lviv City Council condemns such a position.

A different position was taken by the employer of Natalya Makukhovska, who said that “we are Ukrainians and have the right to stand up for our Motherland, and not listen to women who want to lead something in my country”. She turned out to be an employee of the international auditing company KPMG (included in the “big four”), and in response to the outraged comments, the KPMG office came out with the position: they had an explanatory conversation, and the company itself is categorically against any discrimination.

“In our offices around the world, 219 thousand people of different nationalities and religions work … We consider the statements made inadmissible and such that they contradict the internal policies of the company,” the response on the official website of KPMG Ukraine says.

Similar messages were sounded in the comments allegedly from the IAPM associate professor in Odessa Tatyana Repnova — she noted under one of the posts that the current president “hid his Zhivan nationality from people.” Soon, she contacted Dolinsky, saying that her Facebook account had been hacked in order to «generate fake messages and humiliate the president’s dignity.»

A similar story happened with Elena Oleinik from Uman: “The teacher of the Department of Foreign Languages at the Uman National University of Horticulture called on the Ukrainians to throw off the female yoke and the female idol,” Dolinsky wrote on his page. Oleinik herself denied the publication of such a record to Vesti. “I didn’t make any requests. And the profile you are citing is not mine at all, «she concluded.

«There are normal people among the Jews»

Another post — from the deputy head of the branch of the All-Ukrainian society «Prosvita», an employee of the Ternopil Regional Philharmonic, Vasyl Ivasechko. “I appeal to all Ukrainian women to drop their sympathy for Jews, Muscovites, blacks and others,” he wrote on Facebook. “Vesti” found Ivasechko, and in response to our question he was surprised: “This is not anti-Semitism! I just wrote, because it hurts me that our traditions are dying, and the villages are dying out. I turned to Ukrainian women with an appeal to break off relations with the Jews, Muscovites, but I do not consider the word «Jew» abusive. So both Shevchenko himself and Franco wrote! — Ivasechko told us. — There are normal people among women and even among men, but the Semites insult our nation and language. » «Prosvita» has not yet responded to the statement of its activist — this organization, meanwhile, in 2019 received from the budget a little more than 6 million UAH.

Anti-Semitic notes can also be seen in the statements of public figures. General, ex-People’s Deputy, by the way, Hero of Ukraine Grigory Omelchenko in one of his interviews called himself “anti-Zionist, anti-fascist, anti-racist and anti-communist”, clarifying that the plans of “Zionists” in Ukraine he sees in “the adoption of the law on local referendum”.

This also includes the threats that came to President Volodymyr Zelensky from Elena Sambul (she is a volunteer nicknamed Marusya the St. John’s wort): after the coronavirus disease of the president’s wife was confirmed, in her Telegram channel she called on Zelensky to “leave (another obscene, word. — Author) to Israel, until you, as a royal family, were hung up by your legs. «

And, finally, — the statement of Nina Tkachuk, the manager of the Kostopil City Executive Committee (her husband, Sergei Tkachuk, head of the local district council): “If a Jew speaks Ukrainian and sometimes wears an embroidered shirt, he doesn’t become Ukrainian.

“All these statements are united by dislike of Jews: in each of them there is an indication of a nation (Jews, Russians, Poles) and hatred towards them, allegedly caused by the actions of these peoples against Ukraine,” Dolinsky told Vesti. — This opposition of the Ukrainian people to the rest is xenophobia. Specifically Jewish — anti-Semitism. And all together — hate speech. «

Vesti’s interlocutors see the reasons for what is happening differently. Dolinsky blames, firstly, the deterioration of the socio-economic situation, as well as the lack of response from civil society and the law enforcement system.

“The bodies practically do not react to such manifestations, the state does not interfere, and sometimes even becomes an incitement of interethnic hostility. I don’t remember decisions on such cases, ”Rostislav Kravets, lawyer, senior partner of the law firm“ Kravets & Partners ”, tells Vesti. “At the same time, in the Criminal Code, crimes related to incitement to racial, national, religious, etc. hostility are just aggravating circumstances.”

It is interesting that the positions of the two states, Ukraine and Israel, differ on this issue. In December 2019, the Sixth Administrative Court of Appeal made a decision on the lawsuit filed by diplomat, former consul of Ukraine in Germany Vasily Marushchinets on the illegality of his dismissal. Let us remind you that the Foreign Ministry dismissed him for speaking out on social networks, where he used the word «kike».

We quote the court’s decision: “The very fact of using such words as“ fascists ”,“ anti-fascists ”,“ Jews ”and others in statements cannot be absolute proof of the dissemination of information by the plaintiff that contains signs of anti-Semitism, xenophobia, incitement to ethnic hatred, chauvinism and etc. «

Israel’s position was expressed in early summer by the Ambassador to Ukraine Yoel Lion. In an interview with RBC Ukraine, he gave the following definition: “If people talk about how many Jews are doing business in Ukraine, this is anti-Semitism, this is an abnormal thing … If you rewrite history, this is anti-Semitism. If people write insults at the synagogue, it is anti-Semitism. I’ll go even further. I know that many in Ukraine are discussing whether it is possible to use a certain word instead of the word «Jew» in the Ukrainian language — I will not name it, you yourself understand what word we are talking about. But if Jews believe that the use of this word is anti-Semitism, then this is anti-Semitism, period! This is not a question of discussions about whether this word was used sometime in the past or not, in what meaning, etc. If a person thinks that this is a bad word, then it is. «

Among other things, the ambassador clarified: in the legislation of Ukraine, in principle, there is no definition of the word «anti-Semitism». The deputies from the inter-factional group on friendship with the state of Israel (which includes 75 deputies — and this is a fifth of the parliament!) Believe that it is not worth focusing specifically on anti-Semitism.

“There is, in fact, ridicule over different nationalities and ethnic groups — even internal ones, like Hutsuls or Roma. It is impossible to single out one group, it is necessary to prohibit discrimination against all taken together. So that when the very fact of offensive statements arises (if the “equal sign” between people is violated), discrimination and offense are recorded, ”Yury Kamelchuk, a member of the PACE Committee on Non-Discrimination and Equality, told Vesti.

According to him, in the issue of discrimination (xenophobia, anti-Semitism, etc.), you can even use old Soviet practices — holding interethnic festivals, «where in an informal setting people would get closer to each other and learn better.» “In fact, attempts to adopt anti-discrimination legislation can be used with the opposite purpose by nationalists: they say, they do not defend our nation, but only strangers,” said Sergei Shakhov, deputy, co-chairman of the Our Land party. “Therefore, here it is necessary to approach very subtly, to involve the institute of psychology and to unite the positions of all parliamentary factions in order not to destabilize the situation in the country.”