How Ukraine pays the far-right 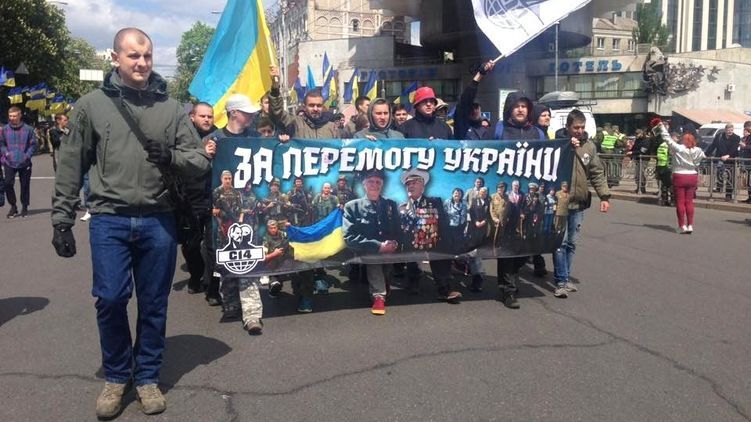 This was common during Poroshenko’s rule.

Strana found out how the situation with the financing of the ultra-right at the expense of the budget changed after Zelensky came to power. As it turned out, funding increased.

A network of organizations under different signs

The C14 group is known for the fact that its members profess ultra-right views, and also admitted to having close ties with the SBU.

The group is headed by Yevgeniy Karas, it includes, in particular, Denis Polishchuk and Andrei Medvedko — two accused of murdering the famous writer and journalist Oles Buzina in 2015.

A number of structures registered under the guise of public organizations are closely connected with the ultra-right from C14. They are linked through common founders and leaders. The nucleus of the group is the public organization «Sich — S14», the founder and leader of which is Yevgeniy Karas.

Andrei Medvedko and Denis Polishchuk, both accused of the murder of Oles Buzina, are co-founders of the National Center for Human Rights. Evgeny Karas has the right to sign all documents of this organization, and it is registered at his home address.

In another organization «Educational Assemblies» Karas also has the right to sign all documents, and in addition is the founder there.

Another related «office» under the name «Union of Veterans of the War with Russia» was founded by Yevgeny Karas, as well as Denis Polishchuk together with Nikolai Panchenko. The latter is also a co-founder of Education Assemblies.

Now the organization with this name has two new founders — public organizations «Kiev Union of Veterans of the War with Russia» and «C14». It is headed by Andrey Medvedko.

Also, Andriy Medvedko is the head of another public organization «Ukrainian Military Victory» («Ukrainian Vyskova Zvytyaga» — Ed.). He established it together with the aforementioned co-founder of the «Educational Assemblies» Nikolai Panchenko, as well as Pavel Polishchuk, the brother of Denis Polishchuk, the second accused of the murder of Oles Buzina.

«Strana» has discovered a number of projects, under the guise of which state structures, already under the new government, continue to finance the ultra-right.

In 2019, the Union of Veterans of the War with Russia received funding from the State Service for War Veterans and ATO (later transformed into the Ministry for Veterans’ Rights). The civil service approved the project «Watch rights of veterans» («Vartovі rights of veterans» — Ed.). The project provided for the issuance of money from the state budget for almost 900 thousand UAH.

Another project — in October 2019, the Kiev City Administration (KSCA) under the leadership of Vitaly Klitschko transferred almost 200 thousand UAH. «National Center for Human Rights» under the project «Legal Consciousness of the Capital». We found information about this on the portal of budget payments «E-date»:

In the list of projects supported in 2019, which is posted on the website of the Department of Education and Science of the Kyiv City State Administration, three organizations related to C14 are indicated as recipients of financial support — the Union of Veterans of the War with Russia, the National Center for Human Rights and Educational Assemblies:

In 2020, organizations from the «C14 pool» continue to receive government funding. At the Ministry of Youth and Sports, they were included in the list of projects of «national-patriotic education» that receive financial assistance from the state this year in the amount of more than 260 thousand UAH:

The Ministry of Culture, as reported by «Strana», in January 2020, distributed 20 million hryvnia from the budget among 165 projects of youth and children’s public organizations. As a result of the competition, the budgetary funds were received by the «Educational Assembly» from the pool of the ultra-right group C14. The National Center for Human Rights is also on the waiting list for funding.

From the Ministry of Veterans Affairs, structures from the «C14 pool» should receive more than UAH 1.3 million this year. budget money. According to the order of the ministry, the «Educational Assemblies» will receive 350 thousand, the «Union of Veterans of the War with Russia» — 600 thousand, «Ukrainian military victory» — 360 thousand UAH:

As a result, under Zelensky, the amounts that the state pays to radicals from C14 under the guise of various patriotic projects increased significantly.

The ultra-right in government

Such successes in obtaining public funding can be attributed to the influence that the ultra-right has gained in the government in recent years.

The radicals’ tactics are simple: in various ways they are members of public councils under ministries and other bodies. This tactic pays dividends.

For example, C14 “leader” Yevgeniy Karas participates in two public councils at once. One of the last orders of the former head of the Ministry of Youth and Sports Igor Zhdanov, before his resignation in August 2019, formed a public council of the ministry, which included the leader of the ultra-right. Karas was nominated there by the «Union of Veterans of the War with Russia»:

Also, the C14 leader has been a member of the public council of the National Anti-Corruption Bureau (NABU) every year since 2016. «Strana» has more than once already spoke in detail about possible falsifications during the elections of the NABU public council.

In 2018, «Strana» reported that the leader of the ultra-right from C14 Karas and «Ax of the Horde» are entering the Council of Public Control under NABU.

And in 2020, during the election of the NABU council, several scandals broke out at once. Candidates’ documents and voting results showed signs of falsification. And two-thirds of the new composition of the council turned out to be closely associated with the «Democratic Sokira» — an organization that supports Petro Poroshenko.

Three more new members of the council at NABU turned out to be from the ultra-right, among them was the leader of C14, Yevgeny Karas. This was reported by «Strana».

Andrei Medvedko, accused of the murder of Oles Buzina, is a member of the public council under the Ministry of Veterans. He was included there from the public organization «Ukrainian Military Victory» («Ukrainian Viyskova Zvytyaga»):

As you can see, representatives of organizations associated with the ultra-right C14 group are included in the public councils of ministries that finance projects of structures associated with radicals. And the participation of the «leader» C14 in the work of the council under the NABU, it is possible, provides a cover for the entire scheme of receiving money from the budget.

At the beginning of 2018, “Strana” described in detail what is known about the ultra-right organization C14. Let us briefly recall the main milestones of the «battle path» of the radicals.

During the Maidan, the head of the C14 group, Yevhen Karas, was one of the «commandants» of the Kiev City Council building. In one of the interviews, he reported on the capture of police officers. On January 24, 2014, he was put on the wanted list:

According to media reports, C14 was then accused of torturing people. However, after the Maidan, this case, like many others, was dropped.

The most high-profile case involving C14 members is the murder on April 16, 2015 of a Ukrainian writer and journalist, former chief editor of the Segodnya newspaper, Oles Buzina.

Interior Minister Arsen Avakov on June 18, 2015 announced on his Facebook about the arrest on charges of this murder of C14 participants Andrei Medvedko and Denis Polishchuk. Later in the commentary, he announced the detention of a third participant, without specifying

According to media reports, the leader of C14, Yevgeniy Karas, believed that the head of the Ministry of Internal Affairs had him in mind when he reported on the «third suspect.»

However, later the “third suspect” disappeared from the investigation. Karas himself denies his involvement in the crime.

The case of Buzina’s murder has been considered for many years by the Shevchenko court of the capital. Neither the customers nor the organizers of the crime appear in the indictment. According to the investigation, Medvedko and Polishchuk allegedly prepared and carried out the murder of the writer on their own because of ideological enmity.

A big scandal was also caused by the recognition of the leaders of C14 that they organize their actions, which often turn into beatings, on a tip from the special services. One of the well-known nationalists Dmitry Reznichenko directly accused Yevgeny Karas of working for the SBU. Soon after this publication, Reznichenko was severely beaten. He stated that he was attacked by people from C14.

Now the nationalists have been employed in the official power structure at the Kiev City State Administration «Municipal Warta». This was also reported by «Strana».

In June 2020, unknown persons shot businessman Igor Plekan near Kiev. As reported by «Strana», the deceased had a long-standing conflict with nationalists. They accused him of organizing the assassination attempt in 2018 on one of the «leaders» C14 Sergei Mazur.

After the murder of Plekan, the head of C14, Yevgeniy Karas, was frankly happy about this:

Another incident — in «C14» admitted that they attacked the office of «Prosvita» in Dnipro and beat its activists.

The leadership of the European Union announced the links of the Ukrainian «C14» with the right-wing radical movements.