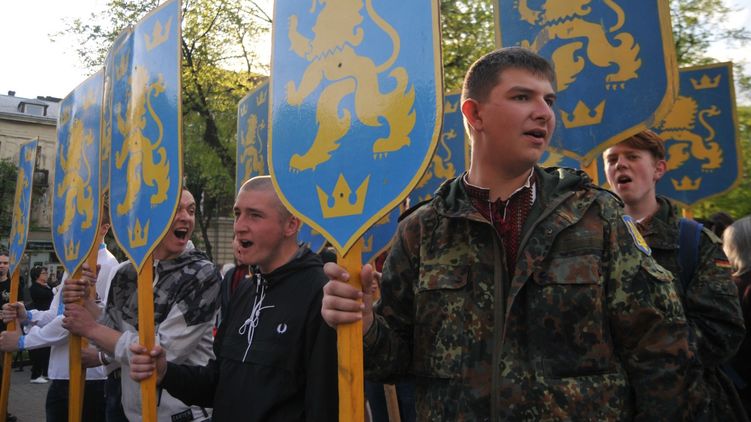 On May 27, the capital’s court ruled illegal the symbols of the SS Galicia division.

This is a military formation created by the Nazis in Lviv in 1943. The division began to be actively glorified after the Euromaidan. The State Institute of National Remembrance was also actively involved in this, which actually legalized the symbols of the division, stating that it allegedly did not fall under the law banning communist and Nazi symbols.

And today the court forbade the Institute to make such conclusions. «Strana» understood the history of this lawsuit.

What the court decided

The decision on the symbols of «Galicia» was made by the District Administrative Court of Kiev — at the request of a resident of Kiev Natalia Myasnikova.

A copy of the decision was published by the people’s deputy Maxim Buzhansky.

The document recognizes as illegal the conclusions of the Institute of National Remembrance that the division’s symbols are not Nazi. The INR officially drew such conclusions on May 16, 2017, in response to a request from Strana journalist Denis Rafalsky.

This document was signed by the then director of this organization, Vladimir Vyatrovich.

As a result, the court forbade the officials of the Institute to disseminate the conclusions made by Vyatrovich in response to the Strana’s request that the symbols of Galicia do not fall under the law banning communist and Nazi symbols.

Obviously, there are certain loopholes in the court’s decision for those who want to walk the streets of cities with the flags of the SS «Galicia».

In fact, Themis decided to prohibit drawing conclusions about the permissibility of symbols only for officials of the Institute of National Memory. And in theory, someone else can freely demonstrate it.

Nevertheless, the UASC verdict opens the way for the prosecution of those who will use the symbols of Galicia in the future.

At the same time, the court refused the applicant’s request to publish this information on the INR website.

However, Vyatrovich himself has a different vision of the court verdict.

“In the published decision of the court, there is not a word about the symbolism of the Galicia division being the symbol of the National Socialist totalitarian regime.

The court decided that the UINR should not have responded to requests from a citizen about the belonging of this symbolism to the Nazi.

Although how the UINR, as the central executive body, could not give answers to the citizen, remains a mystery to me, ”the ex-director wrote on his Facebook page.

It is obvious that the people’s deputy slightly distorts reality — the court did not say anything about the fact that it was impossible to respond to the appeal of the journalist of «Strana». And it is precisely the conclusions of Vyatrovich that are disputed in the said letter.

What did Vyatrovich talk about in his letter to «Strana»

The story of the official glorification of «Galicia» began immediately after the creation of a new state structure — the Institute of National Memory. Which, after the Maidan, was headed by the country’s chief decommunicator, Vladimir Vyatrovich.

However, even then, this raised logical questions: does «Galicia» not fall under the law lobbied by Vyatrovich to ban communist and Nazi symbols? After all, this division was formed within the SS — a criminal organization recognized as a result of Nuremberg. And on the personal instructions of Adolf Hitler. Its symbolism is purely SS (two lightning bolts).

«Strana» three years ago asked the Institute of National Memory — are the symbols of «Galicia» prohibited or not?

In May 2017, we received an official response. Vladimir Vyatrovich referred to clause 5 of part 1 of article 1 of the law, which provides a list of what exactly is meant by Nazi symbols and indicated that this list does not contain symbols of the SS Galicia division.

It was after this letter that a lawsuit against Vyatrovich appeared. The trial lasted three years and eventually came to the above decision.

The cult of «Galicia» in Ukraine

This year the SS division has a kind of anniversary: the 77th anniversary of its foundation.

On April 28, 1943 in Lvov, the division was created. For this, the building of the occupation administration — the «Galicia» district, was assigned. The head of the occupiers, the governor and the SS brigadeführer Otto Wächter was present at the event.

In the future, only German officers led the division as part of the SS, they also led the regiments, and also recruited into this army.

That is, it was not just a collaborative structure, but an integral part of the Nazi troops.At the same time, in Lvov and other places in Western Ukraine, this division is now officially glorified. There are several monuments, memorials, marches in honor of the division are held regularly.

At the national level, this campaign was justified by the Institute of National Remembrance of Vyatrovich;The Galicia division, created in 1943, did not belong to the general SS, but to the SS troops, and was used primarily as a combat unit,; the UINR website said.

At the same time, the very fact of entry into the SS structures of Ukrainian fighters for memory does not bother. It seems that Vyatrovich has «good» and «bad» SS. Although this entire organization was declared criminal in Nuremberg (along with the SD and the Gestapo).

It is interesting that the apology for «Galicia» was on the old version of the Institute’s website. There is no mention of the division on the new one.

At the same time, they continue to «drown» for «Galicia» under Zelensky. On the occasion of the 77th anniversary of the division, at the end of April, the Lviv regional administration published a congratulation. True, the abbreviation «SS» was dropped, and as a result, the Lviv Regional State Administration congratulated everyone on the birthday of the division, as it were, who knows what, created by who knows who.

Although it is easy to find information in open sources that the permission to form the division was personally given by the Fuehrer of Germany, Adolf Hitler. And the very full name of the division — 14 SS-Schützendivision «Galizien» — proves that it was just an ordinary SS unit.

So earlier, and even more so now, after the court’s decision, any positive mention of the SS Galicia division falls under the law «On the condemnation of the communist and national socialist (Nazi) totalitarian regimes in Ukraine and the prohibition of the propaganda of their symbols.»

The Galician governor explained that 84,000 Ukrainian volunteers went to the division created by Hitler in order to «learn the military craft» and «in the future to become the backbone of a well-trained and strong army of the restored Ukrainian state.»

However, proceeding from such an explanation, the aforementioned anti-Nazi and anti-communist law should be abolished altogether, writes the Politics of the Country telegram channel.

“According to this logic, any regional administration can congratulate the residents of their region on the birthday of the Soviet army, because tens of millions of Ukrainians went to it to learn military craft and in the future to become the backbone of a well-trained and strong army of the restored Ukrainian state.

Moreover, it was precisely 500 thousand servicemen of the Soviet army that in 1991 became the «backbone» of the army of independent Ukraine, and the SS «Galicia» division had nothing to do with its restoration.

By this logic, it is possible to fully justify the CPSU, which they went to in order to gain experience in public administration and become the backbone of the administrative elite of independent Ukraine (and this is exactly what it was!). And in the Cheka — OGPU — NKVD — NKGB — MGB — KGB went in order to gain experience in protecting state security and then use it to protect the national security of Ukraine, becoming the backbone of the «well-trained and strong SBU.»

However, these are all lyrics. In reality, the court’s decision, if it is confirmed and in the appeal, will mean that it will be possible to seek a ban on the use of the symbols of the SS «Galicia» division on the territory of Ukraine. True, only an opportunity will appear. And whether the authorities will use it is an open question.