In Ukraine, they are preparing to dismiss for the language 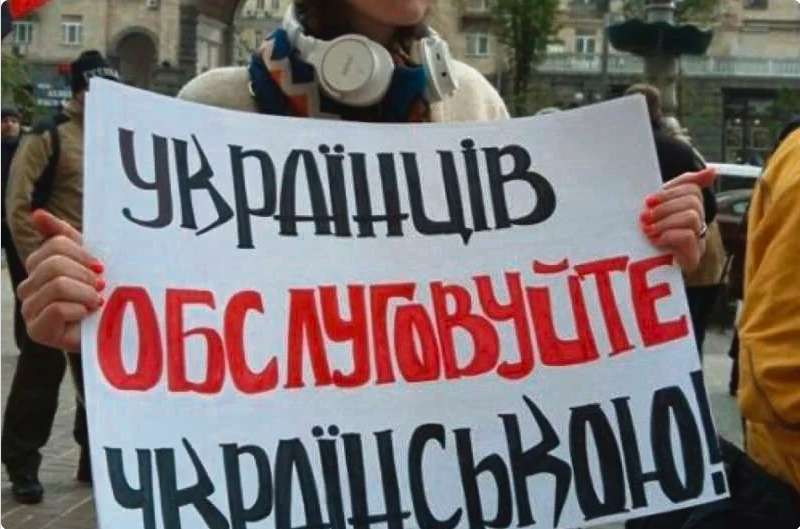 The service sector, which did not go to lockdown, plunged into new realities-from the weekend it must communicate with customers only in Ukrainian. Someone does it perfectly, and someone speaks Surzhik, inserting not only Russian, but Hungarian or Bulgarian words into the supposedly Ukrainian speech. A flash mob «Save the seller from mobile slavery, ask them to serve you in Russian!» has already started on the Web, and people’s deputies are initiating the adoption of a bill abolishing fines for businesses for communicating in a language other than the state language. Recall, they are 5100-6800 UAH. At the same time, there are and those who are ready to fire their employees for non-compliance with the language law.

«When you go to courses, you need to earn money»

Ukrainians are clearly divided into two camps: zealous supporters of the language law and its obvious opponents. The former are ready to go shopping, gas stations and cafes day and night, demanding communication in Ukrainian. The latter are determined not to torment employees by communicating in the state language, especially if they speak surzhik, which makes their ears wither. But in the heat of the moment, many people forgot that a lot of people from the former Soviet Union work in the field of trade and services in Ukraine. And how they will get out of it is a big question.

A small shop of oriental sweets, spices, vegetables and fruits has recently opened in a residential area of Kiev. It is always pleasant to enter it, the goods are lovingly laid out, and the oriental-looking seller is happy to welcome every visitor, wondering how things are and how they are doing. Dakha has been living and working in Ukraine for a year. The store is a family business of immigrants from Tajikistan. The fact that from this Saturday it is necessary to communicate with all customers in Ukrainian turned out to be news for Dakha. «Why doesn’t Russian work? Everyone understands him. I don’t speak Tajik to visitors. And they also want to fine you? This is news, » the seller is surprised.

According to Dakha, their citizens in Tajikistan speak not only their native language, but also Russian. And in schools, it is taught on a par with English and Chinese, which has become popular recently. When Dakha went to Ukraine, it was enough to know Russian. Moreover, when issuing permits, the migration service did not tell him anything about Ukrainian and did not offer language courses. «What can I say in Ukrainian: «good day », «thank you », « goodbye», «how are you ». I don’t understand everything they say to me. If I don’t understand, I keep quiet and nod my head. Yes, and everyone communicates with me in Russian«, — Dakha told» Vesti».

A small bakery in the suburbs of the capital was opened by an elderly couple from Georgia. They came to Ukraine 14 years ago, when the conflict with the Russian Federation began in their country. And the fact that now you need to communicate with customers in Ukrainian was also a discovery for them. «And what, now no one understands Russian? When we arrived in Ukraine, we were glad that we knew Russian well, that everyone understood us, and most of us communicated in Russian. In Georgia, too, after the conflict, they decided not to teach Russian in schools. But then they changed their minds — how can you not know the language of the enemy, and then Russia was the enemy. They’re catching up now. No one in Georgia forces you to speak Georgian, especially visitors, it’s stupid. I still don’t understand Ukrainian very well and don’t speak it. When to go to courses, if you need to earn money, we work every day, without a break«,- tells «Vesti» Tomaz.

Stop making your business a nightmare

Head of the Rada Committee on Finance, Tax and Customs Policy Daniil Hetmantsev, together with his colleague in the Servant of the People faction MP Maksym Buzhansky, demands to cancel the fines provided for by the law on total Ukrainization that has come into force. Hetmantsev wrote about this in his Telegram channel and posted a screen of Maxim Buzhansky’s appeal.

As Max Buzhansky points out in a conversation with Vesti, the main thing here is to decide what is more important: for the business to work and pay taxes, but then you need to cancel fines; or to make the business a nightmare not only by regulatory authorities, but also by language squads.

«I have no doubt that they will not delay and consider the bill. But what the results will be depends on how they vote. And the deputies will vote depending on how you, the voters, demand from your deputies. When people start demanding something instead of buying a product or service, we are no longer talking about business. Businesses have one duty — to pay taxes. And then everything is dictated by the market. If your client needs you to address them in English, you will look for salespeople who know English. If you have opened a Chinese restaurant and expect that the living in Ukraine, the Chinese visited it, you are looking for a waiter who speaks Chinese. If you don’t find it, it will be difficult to communicate with Chinese people. And the Ukrainian budget doesn’t care who you sell your services to — Chinese, Ukrainians, Moldovans, Hungarians. It is important that you pay taxes from which pensions will be paid, and that Ukrainian-language textbooks are printed. We are trying to reduce everything to common sense. This model doesn’t work anywhere else, and it doesn’t work in the Baltic States either. No civilized country does this, because it is nonsense to dictate to a business what language it should use to communicate with a client«,- says «Vesti» Maxim Buzhansky.

They’ll put you out the door with your things

Alexey Davidenko, the owner of the Medtechnika network of companies, said in social networks that he fully supports the language law that entered into force on January 16. «And if you do NOT communicate in Ukrainian in the store with visitors-this is your principled position, please do not delay and write «at your own request«, — he addressed his subordinates via social networks.

Unfortunately, as labor market expert Tatyana Pashkina tells Vesti, some employers will point out the door to employees because they don’t know the state language, and some will fine them.

«If a person becomes a risk for the company to be fined, then employers will prescribe scripts, and those who do not comply with them will either be punished or dismissed. Moreover, in most companies, mandatory knowledge of the Ukrainian language was not spelled out, but now, with the adoption of the law, this has already been spelled out in contracts. But it can be considered Ukrainian speech interspersed with Ukrainian words, that is, surzhik. This, of course, hurts the ear, but it can become an excuse for the employee, » Tatyana Pashkina tells Vesti.

By the way, a top manager of one of the companies involved in cosmetology, told «Vesti» that they have already warned employees that they must speak exclusively in Ukrainian. «First a warning, then a fine, and then a dismissal, «the source tells Vesti.