More and more murders: why do nationalists go unpunished in Ukraine? 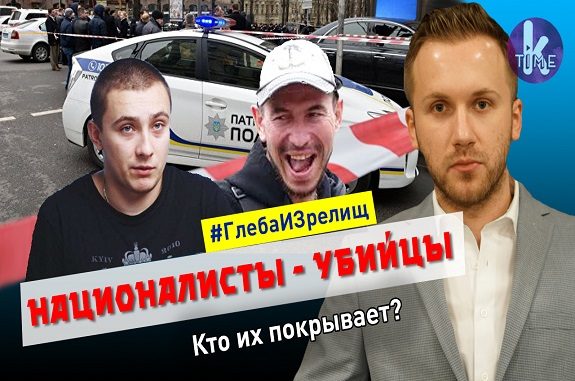 Serhiy Sternenko, accused of murdering a man in Odessa, has disappeared from the information field. But now his friend was on the front pages of the media. Odessa neo-Nazi Dmitry Kruzhilin cut a man’s throat. Also in Odessa.

Why do such elements continue to commit serious crimes and feel unpunished in Ukraine? Why are the courts silent, instead of making fair decisions, and who is covering for these murderers? Klymenko Time understood the situation and tells you.

Dmitry Kruzhilin heads the public organization «Clever». He is a close friend of Sergey Sternenko. Now both of them are charged with murder.

Last Saturday Kruzhilin, at night, in Odessa, right on the street killed Alexander Savin. The man was stabbed in the neck, stomach and back. The killer escaped.

According to the Ministry of Internal Affairs of Ukraine, the crime was committed by Kruzhilin. Now he is put on the wanted list.

Kruzhilin  calls himself a volunteer patriot. He heads a certain public organization that allegedly supplies humanitarian aid to the Donbass. In Odessa, this «patriot» is even invited to television.

Kruzhilin repeatedly participated in marches and torchlight processions of nationalists, where they glorified Bandera and hatred of Russians. He also annually disrupts memorial events in Odessa dedicated to Victory Day.

Kruzhilin’s professional rise began in 2013. Shortly before the Maidan, he left the penal colony, where he was serving time for robbery.

Kruzhilin became an activist, and even began to instill patriotic education in Odessa schoolchildren. However, in 2017, the «hero-patriot» was again tried for stabbing. But then he escaped with a slight fright.

Later, Kruzhilin began to conduct raids in the camps of Odessa Roma. And on May 9, 2020, Kruzhilin attacked a journalist in Odessa, breaking his head. The trial in this case is still underway. The suspect Kruzhilin is under the sanction of «night house arrest».

But instead of sitting at home at night and waiting for a court decision, the nationalist, being under investigation, goes to the street, where he kills a person.

Dmitry Kruzhilin is linked by friendship with Sergey Sternenko, who is also accused of murder, and even that happened on the air.

Sternenko  presents himself as a victim. And they even wanted to make Ivan Kuznetsov, who was killed at his hands, guilty. Allegedly, it was he who attacked the activist, and Sternenko simply defended himself, while catching up and stabbing his attacker.

Put under house arrest by the court, Sternenko, as if nothing had happened, rallies at the Prosecutor General’s house and calls for an uprising.

In any civilized country, such actions of the defendant would be guaranteed to lead to a tightening of the preventive measure. Sternenko should have been lifted from his house arrest and immediately taken into custody. He and his «brothers» exert undisguised pressure on the court.

But a month ago, the court only extended the overnight house arrest for the suspect Sternenko.

Murderers of Oles Buzina. Why didn’t anyone answer

What can we say about the murders of non-public citizens of Ukraine, if famous writers in Kiev are shot right at the entrance?

Publicist and former editor-in-chief of the Segodnya newspaper Oles Buzina was shot dead on April 16, 2015 while jogging near his home in Kiev.

As a result, two months later, Interior Minister Arsen Avakov announced that «the murder of Oles Buzina has been solved,» and the suspects have been detained.

They turned out to be two people close to the nationalist group C14, who were also members of the ATO units: Andrey Medvedko (served in the special battalion «Kiev-2» and «Harpoon») and Denis Polishchuk (was part of the 54th intelligence battalion).

The Ukrainian media has long forgotten about this topic, but the number of murders by «nationalist patriots» is growing every year.

Last fall, the Elderberry trial was postponed six times. In October, three court sessions were canceled due to the non-appearance of suspects who allegedly «caught the coronavirus», and in November, judges suddenly left for «sick leave».

At such meetings, there are actions of support groups for the two accused. The nationalists who have arrived block the work of judges, light flares, and insult the mother of the murdered writer. The police do not respond to this in any way.

The case of patriot Vitaly Markiv. What’s Avakov got to ,do with it?

President of Ukraine Volodymyr Zelensky awarded Markiv with the Order «For Courage».

A former Euromaidan activist, Markiv was a member of a volunteer battalion in the National Guard of Ukraine. Markiv was arrested in Italy in 2017. He was charged with involvement in the murder of photographer Andrea Rocchelli in the Donbas. Markiv was sentenced to 24 years in prison.

But in November 2020, the Milan Court of Appeal acquitted the National guardsman. The Minister of Internal Affairs of Ukraine Arsen Avakov personally flew to pick him up.

This is only possible in Ukraine, where the Interior Minister released a little-known compatriot who was previously accused of murder.

Which of these «heroes» have been held accountable since 2014? But almost all the high-profile crimes of the last seven years in Ukraine are committed either by former Maidan activists or former ATO soldiers.

Here is the» patriot » Kruzhilin from Odessa, who forgot that he was under «house arrest» and went to the street to kill. They’re looking for him now, but he’ll probably show up on his own. Then he will tell you that he defended himself. He stabbed a man three times and accidentally fled the scene of the crime.