Radicals attacked the building of the Constitutional Court of Ukraine 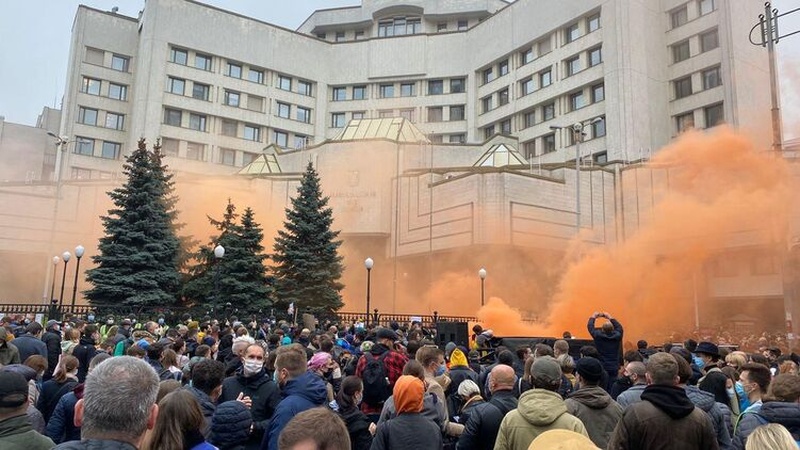 On October 30, at the building of the Constitutional Court of Ukraine, a protest rally «Judges Time to Go to Rostov» took place, organized by the Anti-Corruption Center, Automaidan and the Surrender Resistance Movement. In the morning, radicals burned flares and tires in protest against the decision of the CCU to declare.

“Just 15 minutes ago, there were smoke bombs, some kind of explosions. Several hundred policemen were pulled here, there are now much more of them than the protesters themselves. Zhilyanskaya Street has now been opened for traffic. We heard how the police announced in the loudspeaker that movement along the road was beginning, asked all the protesters to leave this territory. Just 15 minutes ago, there were active aggressive sentiments among people, they wanted to get into the building of the Constitutional Court, ”the Politics of the Country Telegram channel said.

The police said that employees of the structural divisions of the capital’s police, military personnel of the National Guard of Ukraine and the police of the dialogue took over the duty in an enhanced mode. Police officers carry out preventive work with the participants of the event to prevent and prevent the commission of any offenses.

The protest action near the CCU ended under the explosion of firecrackers and smoke bombs.

Let us remind you that on Tuesday the Constitutional Court, on the proposal of 47 deputies, canceled Article 366-1 of the Criminal Code, which provides for liability for inaccurate declaration.

The court also ruled unconstitutional the provisions of the laws on checking the electronic declarations of officials and canceled the right of the NACP to check the declarations and identify conflicts of interest.

On October 29, the Cabinet of Ministers of Ukraine at an extraordinary meeting adopted an order by which it ordered the NAPC to immediately restore citizens ‘access to the register of officials’ declarations and provide a mechanism for their special verification.

As a result of these decisions, NAPK restored access to the unified register of electronic declarations after the relevant order of the Cabinet.

The State Bureau of Investigation has summoned the chairman of the Constitutional Court of Ukraine, Oleksandr Tupitsky, for questioning on November 2.

President Volodymyr Zelenskyy has submitted to the Verkhovna Rada a bill proposing to dismiss the entire composition of the Constitutional Court.